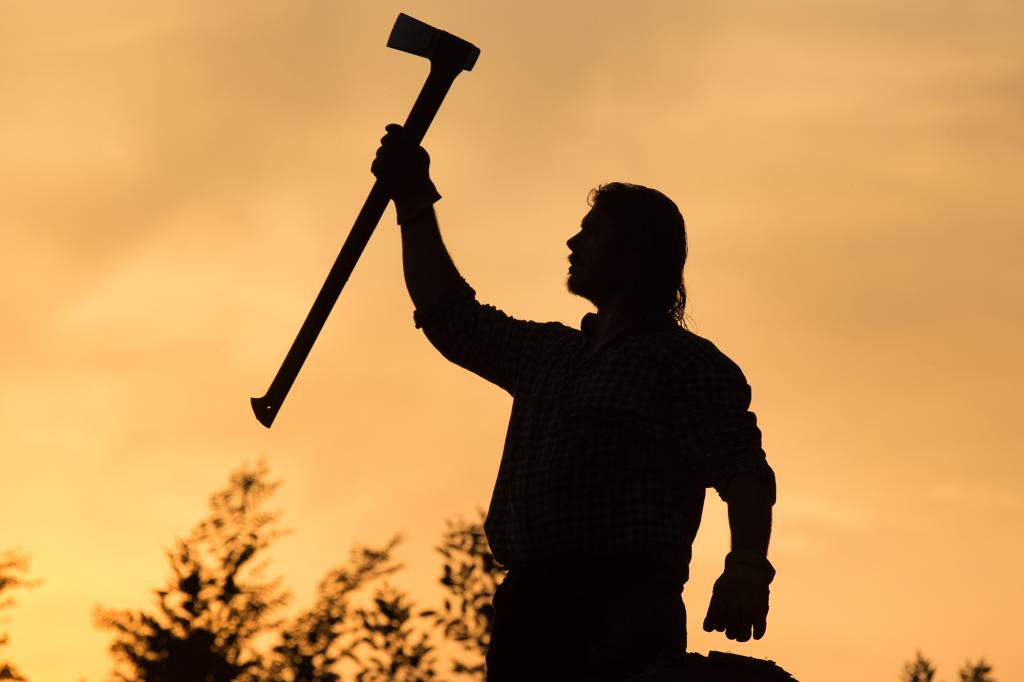 The law finally caught up Chris Guffie, also known as “The Redwood Bandit,” during the summer of 2005. But his arrest didn’t come easy.

Guffie, 42, had been poaching from the redwood trees of Northern California and the Pacific Northwest for over a decade, stealing the burls — the knobby growth at a tree’s base — to sell to local mills.

He’d been caught only once before, in 1994 while poaching old-growth yellow cedar (protected by the Endangered Species Act) with a partner in Olympic National Forest in Washington state. Their haul was valued at more than $33,000, and they would have gotten away with it if Guffie hadn’t contacted a local helicopter pilot for help removing the stolen wood. The pilot alerted the Washington State Department of Natural Resources and gave them Guffie’s exact coordinates.

Although both men pled guilty, authorities “felt the pair were unlikely to be able to pay the full value,” Bourgon writes. They were sentenced to just 30 days in jail.

But the 2005 bust was more serious. Over the years, Guffie had developed a reputation “for his expressed goal to ‘rob the national park of their wood’,” writes Bourgon. Ron Barlow, a local rancher in Orick, the California town where Guffie and other tree poachers lived, told the author that Guffie had become a local legend for “inspiring others to do wrong.”

Even Guffie fed into his own mythology. “I’ve been at it for so doggone long, it’s like Yogi Bear and the park ranger,” he told Bourgon.

The rangers finally caught up with him at Lost Man Creek, part of the Redwood National and State Parks in Northern California’s Humboldt County. He and a partner were discovered poaching from a downed redwood log — timber that was thousands of years old — and Guffie was only apprehended after a 90-minute chase through the dense forest.

This time, he was sentenced to 120 days in jail and three years of probation. After his release, he returned to the forest and, like he had the last time he was brought (briefly) to justice, he just . . . disappeared.

Guffie is — or was, if you take him at his word — a member of a notorious gang of redwood poachers known as “The Outlaws,” who regularly sneak into Redwood National Park with chain saws, often in the middle of the night while creating their own trails in and out, and return with a bounty of stolen wood.

It’s a lucrative business; in North America, Bourgon writes, “it’s estimated that $1 billion worth of wood is poached yearly. The US Forest Service has pegged the value of poached wood from its land at $100 million annually.” Burls are the most valuable cuts, used in everything from luxury car consoles to musical instruments to ornamental furniture.

It can also be the most devastating loss to a forest. Cutting a burl from a live tree weakens it and makes it vulnerable to disease. Even if a redwood has fallen or is severely damaged, the burl can sprout another tree. Removing the burl is like salting the earth.

For more than a century, the biggest threat to redwoods was the logging industry. “Between 1850 and 1990, ninety-six percent of redwoods disappeared due to logging,” writes Bourgon. To slow it down, the Redwood National Park was created in 1968, protecting 58,000 acres of the forest. And in 1978, President Jimmy Carter expanded the park by 48,000 acres, nearly doubling its size.

Chris, one of his three sons, was poised to join the family business. “I’m a logger by trade,” he told the author. “I’ve been doing it ever since I was just a pup.” He assumed he would someday take over the family trade. But those dreams came crashing down with the expansion of Redwood National Park.

It was good news for the trees, but not for the men who depended on those trees for their living. Men like John Guffie, who moved to Humboldt County in 1955 to work as a logging supervisor, and eventually launched his own company, Guffie Timber Cutters.

His dad’s business shut down in 1980, and he “listened to the rhetoric: the park would mean ‘annihilation’ for the town,” writes Bourgon. His dad warned him that the environmentalists “want to control everything” and the park officials were all “parasites.”

Thousands of loggers lost their jobs, and the town of Orick, the gateway to the Redwood National Park and once a bustling logging epicenter, lost its entire economy. NPR recently described Orick — it’s no longer technically a town but a “designated census place” — as looking like “the setting for a zombie movie.”

Tree poaching became the only way for guys like Chris Guffie to survive without starting over in a completely different industry. And it’s a crime that’s difficult to prosecute. “It is one thing to link a stolen car back to its owner via paperwork or plates, and another to link poached wood to the stump it once stood on,” writes Bourgon. “In lush forests, those stumps are usually hidden behind a curtain of trees, or covered in moss, or buried in branches — in all cases next to impossible to find.”

Catching poachers in the act has increasingly involved high-tech solutions, from cameras hidden in trees to magnetic sensor plates on the forest floor which “would spring to life upon detecting the dense metal of a chain saw,” writes Bourgon.

But even with the help, the poachers were always a step ahead. Reviewing footage from a tree camera, RNSP ranger Laura Denny was pretty sure she spotted somebody resembling Guffie walking into the park with a chain saw. But it was hard to be sure, because the Guffie lookalike “was sporting a woman’s wig and sunglasses,” writes Bourgon.

Despite the two arrests, Guffie never officially retired from poaching. The Park Service just gave up on him. “Guffie, as I recall, is pretty darn smart,” Yu told Bourgon, explaining why the rangers targeted other poachers while ignoring The Outlaws’ biggest name. “That’s his identity. He’s not going to stop.”

Tree poaching has only gotten worse in recent years. Since 2010, the United States Forest Service estimates that as many as one in 10 trees cut in the national forests is poached. Redwood rangers are now calling it a “crisis.”

The whereabouts of Guffie, now 59, remain a mystery. During his last conversation with Bourgon in the fall of 2020, he claimed he’d recently spent time working on oil rigs in Wyoming, but is now homeless.

“Of course all of us would have been working still, we work for our money, we’re not out for a handout or anything,” he told the author about himself and the other Outlaws. “But when we go out to try and make a few bucks for the family, we get penalized — thrown in jail or whatnot.”

Guffie’s father, John, still alive and well, sold the family house in Orick and moved south to McKinleyville, and continues to support his son. “They share certain characteristics,” Bourgon writes. “Anger toward the Park Service, frustration at lack of opportunity. John labels Orick a town ‘just for druggies’ now. And all the better, he says, echoing a conspiracy that many in Orick have peddled to me: eventually the town will empty out, enabling the Park Service to take it over fully.”

One thing Guffie hasn’t lost is a romanticism for poaching the Redwoods. Without directly comparing himself to Robin Hood, he makes it obvious he feels a connection with the outlaw of folklore.

“Robin Hood,” Guffie told the author, “was just taking care of his and his own.”

Whoopi Goldberg’s granddaughter is ready to claim her fame