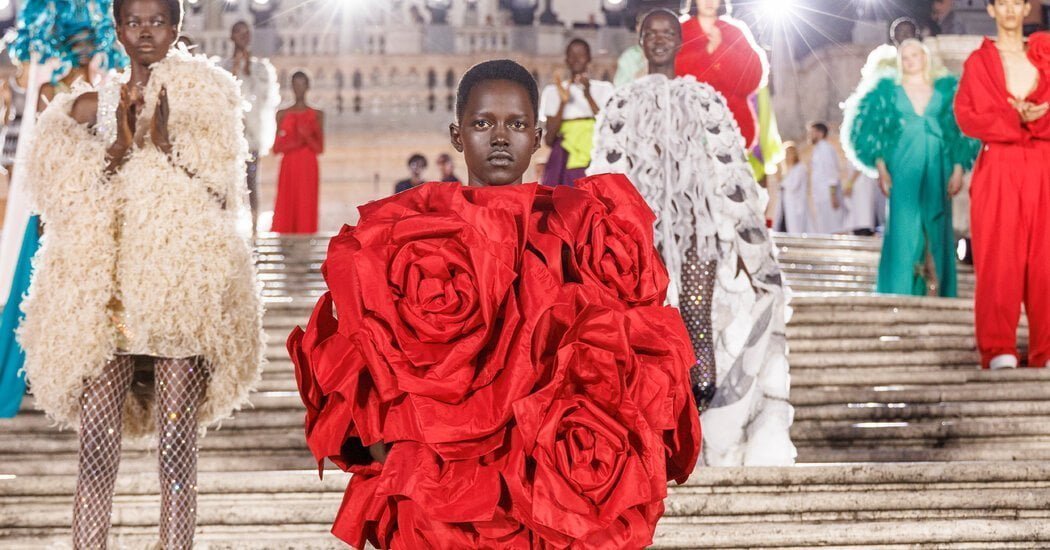 ROME — The couture shows came to an end not in Paris but in Rome, with a river of gold ballroom chairs connecting the Piazza di Spagna at the foot of the Spanish Steps — the most famous people-watching and -posing staircase in Europe — to Piazza Mignanelli, where the Valentino headquarters stand.

Twenty-three years after he joined the brand in the handbag department, Pierpaolo Piccioli, now Valentino’s creative director, wanted to bring his collection home to where it began, to offer something of a treatise about history, humanity and what happens next. That it came in the form of clothes simply raised the stakes.

“For me, more than ever, beauty is a power,” he had said a few days before, during a preview in his Paris atelier. “I don’t want to reflect the ugliness of a world where democracy is denied.” His job, he said, was to present an alternative.

In a Rome nearing sunset, guests famous and otherwise milled around their seats taking selfies in a rainbow of Valentino plumage. Anne Hathaway tottered by in a fuchsia sequined minidress and towering platforms from the most recent ready-to-wear collection. Andrew Garfield was in a symphony of blue. One woman wore the lime green style that Melania Trump had worn to the final evening of the Republican National Convention in 2020. At the top of the steps, the Trinità dei Monti church practically glowed in the last of the evening light. Around the square, neighbors hung out of their windows to see what was going on.

Then the models began to descend, more than 100 of them, walking down the many steps worn smooth after nearly three centuries by the legions who came before. Mr. Piccioli had conceived of the collection as a conversation between himself and Valentino Garavani, the founder of the brand (who retired in 2008 and who, at 90 years old, did not attend the show), told in the language of aesthetics.

The roses that were one of Valentino’s signatures were there, but this time whorled into a three-dimensional puffball atop a sequined short jumpsuit. Ditto the ruffles, which, in Mr. Piccioli’s hands, looked more like undulating waves, shifting in the air. And the red that has been synonymous with the house — though Mr. Piccioli has expanded the palette to an eye-boggling extreme, so plum is teamed with chartreuse and white, amethyst with cherry and smoky quartz, a slithery column of silver with a dash of periwinkle.

Indeed, what this show made clear is just how expansive his Valentino has become: expansive in ideas and emotion; embracing all forms of age, size and shade; long ago tossing gender distinctions and pretty much all forms of rigidity out the window. There’s nothing jaded or cynical about it.

One sweeping oatmeal-tone evening coat, with a constellation of sparkles and the heft of royalty, was thrown over velvet drawstring shorts and a tank top embroidered with crystals. A dress entirely encrusted in beading was cut like a T-shirt. Giant ruffled skirts were paired with little cropped tops. Taffeta capes with Medici-sized puffed sleeves shrugged on like denim jackets: Oh, this old thing?

It is not immaterial that before the show Mr. Piccioli offered his models a choice of footwear — flats, kitten heels or stilettos tied at the ankle with a giant bow — because, he said, he realized the slippery travertine steps were pretty scary. Or that he invited more than 100 fashion students to attend. Or that, at the end, when all the models were arrayed on the steps in a lush bouquet of feathers, taffeta and chiffon, he brought out his entire team of petites mains to take a bow.

Once, couture was a closed world, visible to only the very few with the money and connections to access it. But this was a story told in a public place, with images made to resonate far beyond. As such, it was a dazzling reminder, in an authoritarian time when everybody is increasingly hunkered down in their bunkers and their echo chambers, that generosity is a superpower all its own.

How war worry is causing stroke cases to spike in Ukraine