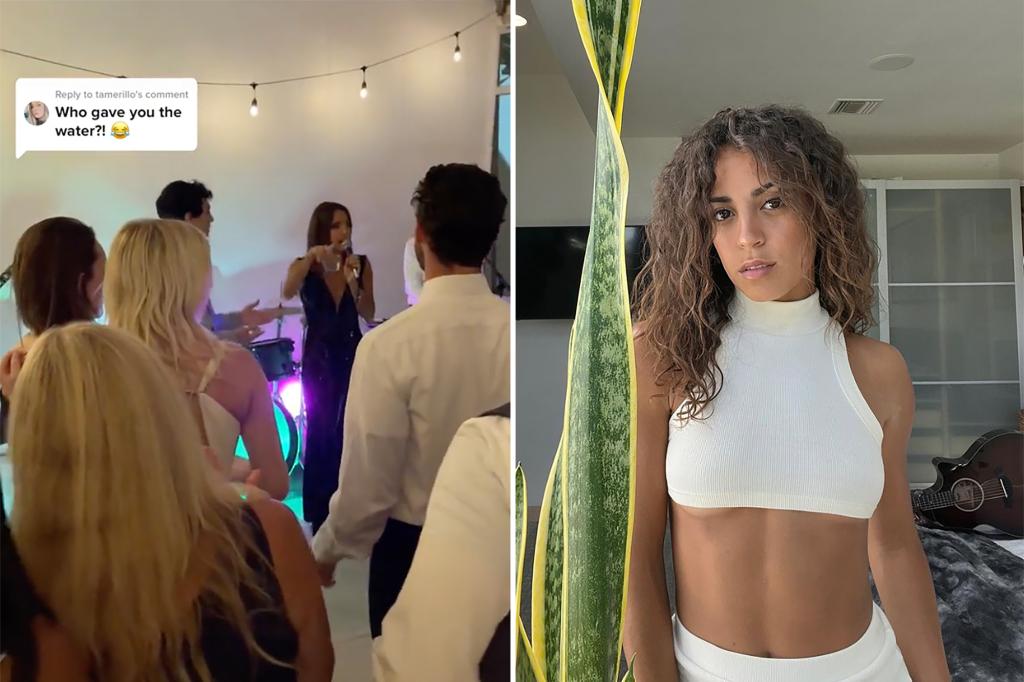 This wedding singer’s story of revenge is pitch perfect.

A jilted woman has gone viral after claiming she was accidentally hired to sing at her cheating ex’s nuptials — before she shamed the unsuspecting groom and his new bride when she reached the microphone.

Alexandra Starr has drawn 17.3 million views on TikTok with a clip posted last month. “He who cheated on me booked my band to perform at his wedding — and he doesn’t know I’m the singer,” she declared.

Starr subsequently explained that she serves as a “cover singer” for the band — meaning her ex had no idea she was a part of the group when he hired them to perform for his big day.

Starr also claimed that she had been dating the groom for five years before he cheated on her with the woman he was set to wed, so she was eager to exact revenge on the both of them.

The couple — who have not been publicly named — allegedly tied the knot at the end of last month, with a shocking clip uploaded by Starr on Aug. 30 appearing to show how her vengeful plan all went down.

In the clip, the unsuspecting bride and groom get ready for their first dance with Starr’s back turned towards them.

The bands strikes up, before the brunette songstress begins performing the couple’s chosen wedding song, “All of Me” by John Legend.

But the vindictive wedding singer soon derails the newlyweds’ night, switching tracks and launching into a version of “Before He Cheats” by Carrie Underwood, turning around to face the couple and reveal her identity.

The clip — which has been viewed 9.9 million times — shows the blond bride looking shocked and confused, as Starr sings the lyrics: “Right now, he’s probably slow dancin’ with a bleached-blonde tramp and she’s probably gettin’ frisky.”

A second video shows Starr continuing to sing the song as her former lover stands stunned.

A wedding guest then tries to interfere and stop Starr from continuing, before she promptly throws a glass of water at the groom and struts out of the room.

Some viewers, however, were not convinced that the scenario was real — claiming Starr concocted the elaborate TikTok tale to drum up interest in her budding music career.

“Feel like this is definitely staged,” one stated, with another claiming the video was of a “Lifetime movie quality.”

A third skeptic said the reaction of the bride and groom did not appear believable, snidely stating that it felt like “telenovela acting.”

However, as of this past weekend, Starr is continuing to insist her story is real despite continuing questions from viewers. The Post has reached to the wedding singer for further information.

Regardless of the story’s legitimacy, the viral videos have exposed the crooner to a whole new audience — and they like what they hear.

“She can sing!” one impressed female viewer swooned, claiming the tawdry tale of revenge was music to her ears. Make Your Own No-Carb Egg Wraps With Two Ingredients

California’s Newsom will run for president if Biden doesn’t: report