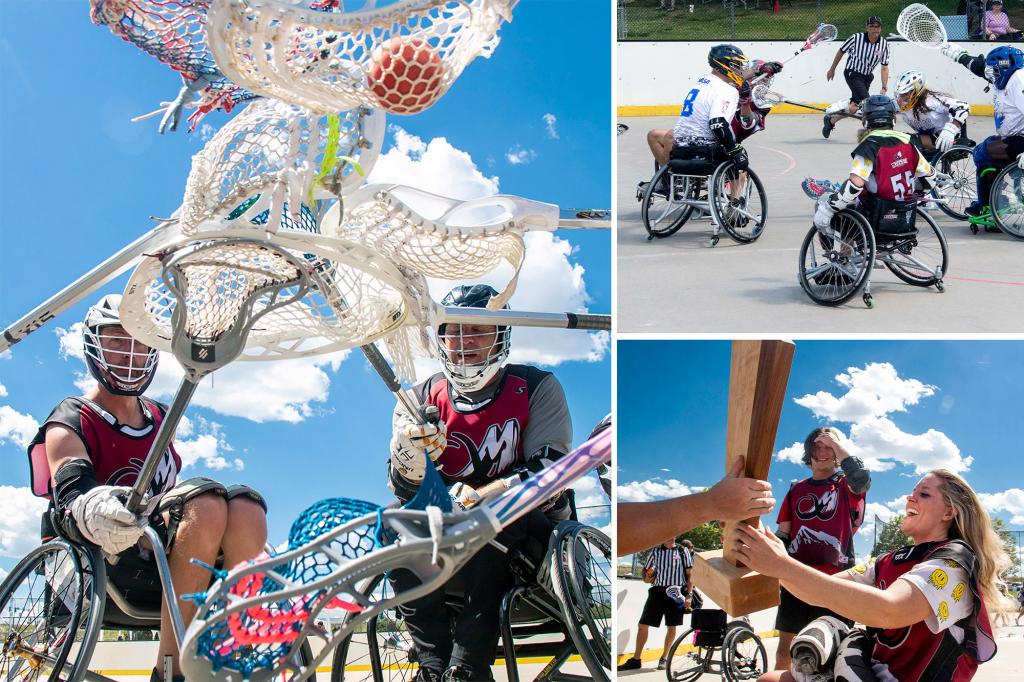 The sun is burning on a Sunday morning at Wheel Park in Aurora. The Colorado Rolling Mammoth wheelchair lacrosse team have unloaded their equipment and are strapping in for another intense practice in one of the facility’s roller hockey rinks.

The athletes roll onto the cement rink with helmets on, padded up, and lacrosse sticks in hand.

About a dozen players go through passing and shooting drills to warm up. After whipping a few practice shots on goal, the real fun begins.

Using half of the rink, two teams scrimmage.

The wheelchairs crash and clank against each other and smash into the wooden boards lining the rink. Sticks clack and strike against wheelchairs. Players fire the lacrosse ball from all directions. It’s the size of a small orange, but made of dense rubber.

And it moves — fast.

Fast enough to catch this reporter in the mouth once, to the laughs of many. (Yes, it hurt. Yes I was paying attention — it really is fast.)

For Daniel Hersh, it was that speed that attracted him to the game. He was used to it. He needed it.

“I watched the game and I noticed the high speed of it, the pace, and the physicality.”

Hersh had been looking for a new way to find that speed.

“I was racing competitive motocross and had a spinal cord injury, A T6 injury is my level. So, I have no feeling or movement or control of my body from about my sternum down,” Hersh said.

“Got home and started looking around to see if there was wheelchair lacrosse.”

Hersh never played lacrosse before his injury. But, like many, wheelchair lacrosse gave him a second chance to play and compete at a high level.

Hersh’s search led him to Wheelchair Lacrosse USA, which was just getting started at the time. He brought the sport to Colorado and founded the Rolling Mammoth. Hersh says the team began to recruit through youth camps and clinics — like Craig Hospital which specializes in neuro-rehabilitation.

The team gave new people a chance to play lacrosse and gave people like Shawn Maloney a second chance.

“I was out of the game for a while. I didn’t know this existed,” Maloney said. “I attended a clinic and was hooked. It’s the same game I’ve always played. We just use wheelchairs.”

Maloney overlooks practice and shouts out coaching tips while propped up on a cane. Maloney is a lacrosse lifer. He played in high school and captained Colorado College’s field lacrosse team. But his playing days came to an end when a bad fall broke his back and left him paralyzed from the waist down.

So he had to adapt his life, including adapting his sport.

“There’s not a ton of adaptive team sport options out there. Wheelchair basketball is really popular, wheelchair rugby is really popular,” Maloney says, “But we feel like wheelchair lacrosse can kind of hit a nice niche in between those where it’s still a contact sport, but it’s not quite rugby.”

— Wheelchair lacrosse was invented in San Diego in 2009.

Lacrosse is the oldest sport in North America. It was invented by Eastern Woodlands Native Americans in the United States and Canada centuries ago. Today’s version more closely resembles Indigenous stickball.

But, the idea of wheelchair lacrosse was conceived in Colorado.

Ryan Baker is one of the sport’s creators. On the day after his high school graduation in 1991, he and his family were moving from San Diego to Steamboat Springs when they were involved in an automobile accident. The accident left Baker paraplegic.

“It was kind of like a baptism by fire thing,” said Baker, who spent ten years living in Steamboat Springs and another ten in Denver before heading back to California.

“Being new to the injury and then living where there’s going to be snow on the ground seven or eight months a year is pretty good,” Baker said with a healthy amount of positivity ”It was a good place for me to recover and assimilate.”

While in Denver, he took up wheelchair tennis and through his trainer happened to meet the lacrosse coach at Regis High School.

“I just thought how interesting, the lacrosse stick shouldn’t really be that different than a tennis racket,” Baker said. “It’s a little longer of course but the mechanism and mechanics are the same.”

“I just thought how interesting would it be if there was a wheelchair lacrosse element or an offering for disabled athletes.”

Back in San Diego, Baker and his friend Bill Lundstrom started tossing the ball around.

Soon, others joined and the sport was born. They began to hold clinics around California to teach others the rules and technique of the game.

The game is played on a roller hockey rink or hard surface lacrosse rink. Each team fields eight players — one goalie, two defenders, three midfielders, and two attackers. Each team must keep three players in the defensive half and two players in the offensive half at all times. Game time is four 15-minute quarters.

Substitutions are done on the fly — which adds to the speed. Players are required to go to the penalty box for infractions — much like hockey.

And, due to the wide popularity of the sport and in order to expand it further, teams are allowed three able-bodied players who also play with the equipment — including wheelchairs.

Rolling Mammoth goalie Steve Kartsen is one of those players. He played for the University of Northern Colorado’s club lacrosse team where Hersh coached.

“It comes a bit quicker, I think because of the lower angle,” Kartsen says after taking a barrage of shots. “There’s a few (shots) that catch you in the soft spots that hurt. It’s much more physical than field lacrosse.”

— From the coast to the mile high

Word spread from Southern California to Hersh in the Rockies around 2013.

A year later, the first wheelchair lacrosse clinic was held in Colorado Springs. As part of the clinics, Hersh was able to keep some of the equipment to help recruit and build a team. He was also able to receive grants from USA Lacrosse.

From there it began to take off, attracting disabled and able-bodied athletes from different backgrounds in Denver.

Allison Brown is one of a few women on the Rolling Mammoth. She played lacrosse growing up. After multiple surgeries and constant leg pain, Brown opted for an amputation on her left leg six years ago. This is her first wheelchair lacrosse season.

“I play sled hockey. I do archery with one of the guys on the team. And now, lacrosse, because I loved the sport before I was disabled,” Brown said. “I wish more women would come out to play.”

Another reason for the sport’s growth in Denver is the Rolling Mammoth’s strong relationship with their professional counterpart The Colorado Mammoth. Most wheelchair lacrosse teams are based in markets with a professional indoor lacrosse team. In Denver, Kroenke Sports has sponsored most of the adaptive sports teams, which is why they share the names of their professional counterparts, such as the Rolling Nuggets wheelchair basketball team, the Rolling Rapids power soccer team and the Colorado sled hockey team, who sports uniforms similar to the Avalanche.

“Luckily here in Colorado, a lot of our adaptive sports are paired up with Kroenke Sports,” Hersh said.

And the Rolling Mammoth have taken on their professional counterparts in scrimmages.

“We’ve put some of their (Mammoth) players in chairs so they could kind of get a feel for it,” Hersh said.

Mammoth goalie Dillon Howard — who was named the National Lacrosse League Finals MVP this past season after leading the Mammoth to the team’s second NLL championship — says the experience is humbling.

“We definitely feel like we have our stick skills. But, anytime that there’s a race to a ball and there’s something that involves the chair, we are at complete disadvantage,” Ward said. “It feels like we’re almost playing in mud. These guys are incredible athletes.”

The Rolling Mammoth’s local success has translated to the national stage.

The Wheelchair Lacrosse USA Nationals have been held in the Denver area twice, 2018 and 2022. And The Rolling Mammoth won the championship in 2021 over the Milwaukee Eagles.

Hersh was excited to have the tournament return to Aurora this year and to defend their title in front of a home crowd.

“I love having the tournament here. It’s great,” Hersh said. “It’s a home field advantage for us because we’re used to the altitude.”

And the home team didn’t disappoint.

The Rolling Mammoth finished round-robin play undefeated on the first day of the tournament. Day two finished with a rematch with Milwaukee in the championship game.

The Rolling Mammoth cruised to a 6-2 win for their second consecutive title.

“I think the overall tournament was great,” Hersh said. “We grew. Started out a little rough, but you know we grew over the weekend and pulled it together. So, I can’t be happier.”

“I would love to see it keep growing and get more players. And if we grew an extra team or two, that’d be awesome. That will be the ideal goal,” Hersh said. “It’s a great year for lacrosse teams here in Colorado.”

And Hersh is right about that. Last week’s win means three lacrosse titles in two years between the Mammoth and Rolling Mammoth. And for a city that loves championships, it’s the seventh national win this year. 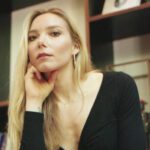 For a Woman in a Wheelchair, Abortion Access Was One More Challenge In the Mile High City, Festivals and Food Are on the Rise 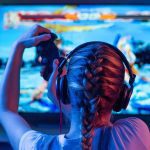 Chinese state TV cuts shots of mask-free World Cup fans
11 mins ago
What to Do When Your Kid Starts Tattling That Santa...
20 mins ago
Russia Fortifies Defenses in Southern Ukraine, Analysts Say
1 hour ago