Why So Many Celebrities Are Moving to Brooklyn Heights 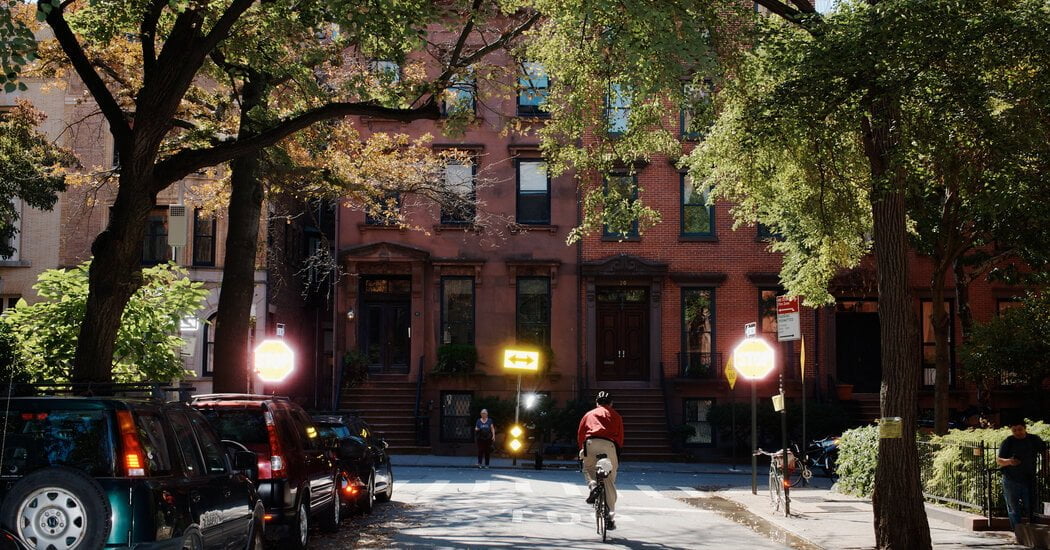 On a recent afternoon, the line stretched down the block from L’Appartement 4F, a French bakery that began as an Instagram account during the pandemic and opened in a storefront in Brooklyn Heights in June. It has been mobbed ever since.

Down Montague Street, a stylish crowd was having brunch at Felice, a new Italian restaurant run by the group behind the fashion-world hangout Sant Ambroeus. Felice recently made the celebrity-obsessed site Deux Moi, when the actress Tommy Dorfman was spotted there.

And a few blocks away, the actor Paul Rudd was hanging out on his stoop with his family, having recently bought and renovated a brownstone in the neighborhood.

In the past year or so, the stodgy and moneyed enclave of Brooklyn Heights, the old Volvo of New York neighborhoods, has undergone a subtle yet significant shift.

The change is in the early stages: Senior discount Tuesday at Gristedes is still popping, and the closest thing to a home furnishing store is Mattress Firm. But the leafy neighborhood, just south of the Brooklyn Bridge along New York Harbor, has destination food and shopping for the first time in ages. Its grand historic townhouses have become prized by the new superrich who are pushing out the merely well-to-do lawyers and bankers who have long made up the local gentry.

And celebrities are now everywhere. Amy Schumer made news in July when she paid more than $12 million for the “Moonstruck” house, the five-bedroom, 5,600-square-foot townhouse built in 1829 on Cranberry Street where the Oscar-winning 1987 film was shot.

Matt Damon paid $16.7 million in 2018 for a 6,000-square-foot penthouse apartment in the Standish Brooklyn, the Beaux-Arts style hotel turned celebrity-filled condo on Columbia Heights. His neighbors include John Krasinski and Emily Blunt. Three blocks away, Michelle Williams paid $10.8 million in 2020 for a 3,000-square-foot townhouse.

Celebrity sightings have become so commonplace — Jennifer Connelly walking her children to school; Keri Russell and Matthew Rhys on a weekend stroll; Adam Driver playing fetch at the dog park — that it’s small wonder the paparazzi have not staked out the promenade.

In another sign of the neighborhood’s rising cultural cachet, Jenny Jackson, a vice president and executive editor at Knopf, has written a novel of manners set in Brooklyn Heights that follows an old-money family. “Pineapple Street” is not due out until next year but has been optioned for development as a TV series.

She, too, has had her share of celebrity run-ins. “The West Village is where you went if you wanted to see celebs in their natural habitat,” Ms. Jackson said. Now she runs into Keri Russell at SoulCycle and Adam Driver at the ice cream cart. “I’ve seen Matt Damon outside the pharmacy. He’s so conspicuous because he pulls his hat down to try not to be noticed.”

The West Village analogy is not far off. Ever since Carrie Bradshaw was seen coming out of a Perry Street brownstone, the neighborhood has been considered one of New York City’s most desirable for a certain breed of downtown celebrity who coveted a West Village townhouse as the ultimate real estate prize. Architectural Digest once asked if West 11th Street was home to the city’s most “star-studded” block.

But maybe the West Village became too much of a good thing. All the best townhouses got gobbled up by billionaires like Steve Cohen, the hedge fund manager and Mets owner. Tourists flocked to the Magnolia Street bakery and the boutiques on Bleecker Street.

In a city where the ultrarich want not one, but two home offices and lots of outdoor space — desires that went into overdrive during the pandemic — Brooklyn Heights has emerged as a picturesque alternative for those who can afford to live anywhere.

“There are countless buyers right now who are shopping simultaneously in the Village and Brooklyn Heights,” said Ravi Kantha, a partner at Leslie Garfield, a real estate agency that specializes in townhouses. “I tell people, ‘It’s like the West Village, uninterrupted,’” he added, referring to the blocks of well-preserved townhouses on tree-lined streets.

In some ways, it is even nicer. The houses in Brooklyn Heights tend to be larger than in the West Village, many built during the 19th century by wealthy merchants in what would become the first suburb of Manhattan.

The charming streetscapes are also more seamless, offering a cloistered tranquillity that other brownstone neighborhoods lack.

“In the West Village, you’re sandwiched between the avenues, and there are all these people coming in from out of town to go to the comedy clubs or the jazz clubs,” said Elizabeth Roberts, the architect known for blowing out the back of Brooklyn brownstones and installing a glass wall. “Brooklyn Heights is block after block of quiet. Why are celebrities and others headed there? It is the most beautiful Brooklyn brownstone townhouse neighborhood there is.”

And, it has spectacular views of the Manhattan skyline, giving it a visual link to the city center, which is reassuring for anyone venturing across the river for the first time. That may explain why the private roof deck has emerged as the trophy amenity of Brooklyn Heights.

Just ask Robert Taffera and his brother, Eric, of Taffera Inc., the “It” contractors in Brooklyn Heights — yes, there is such a thing. New brownstone owners have a sky-is-the-limit approach to the gut renovations, with budgets sometimes exceeding $4 million, based on quotes of a $1,000 a square foot for renovations.

“In some projects, we’ve excavated almost under the whole lot and put the garden back on top,” to make room for offices, gyms and wine cellars, Robert Taffera said.

Home prices have also hit the roof. In 2020, a penthouse unit at Quay Tower, a waterfront condominium, sold for $20 million, breaking the borough’s sales record held by Mr. Damon. That record was short-lived: In 2021, a sprawling house on Montague Terrace owned by Vincent Viola sold for $25.5 million to an undisclosed buyer.

Many of the recent arrivals made their fortunes in the new economy, and are attracted to the gorgeous architecture, proximity to Manhattan and elite private schools like Packer Collegiate Institute and St. Ann’s School.

They include Joseph Lallouz, a cryptocurrency executive who paid $18.3 million last month ($3 million more than the previous list price) for a five-story brownstone with a carriage house, private garden and a rooftop with waterfront views. Other notable residents include Dan Houser, a founder of Rockstar Games; Michael Lynton, the chairman of Snap Inc; and Julie Greenwald, the chief operating officer of Atlantic Records.

“People who walk around the neighborhood, very often the first comment is, ‘Wow, it’s so beautiful. It’s so quiet, it’s so peaceful,’” said Mr. Kantha, the real estate agent. “For anyone who’s looking for an escape from the pressure, the noise, anything about the city that can be overwhelming, this is a pretty amazing thing to discover.”

But there are still many amenities that Brooklyn Heights lacks. Until recently, there were no scene-y bars or restaurants worthy of posting on Instagram. There are no gourmet stores to buy grass-fed beef or cheese from Hudson Valley purveyors. No boutique hotel with a lobby scene to take meetings.

The closest thing to a social club is the Heights Casino, a timeworn squash and tennis club that feels imported from 1950s Greenwich, Conn.

Montague Street, the neighborhood’s main commercial strip, is famously, perpetually drab, a boulevard of chain stores like Starbucks and Key Food interspersed with mom-and-pop hardware stores, bodegas and diners, along with many empty storefronts.

Ashley Coiffard, who opened L’Appartement 4F with her husband, Gautier Coiffard, first visited Montague Street three years ago and remembered thinking that there was nowhere to eat except for a Subway.

“After we signed our lease a lot of people were, like, ‘Brooklyn Heights — there’s not too much going on. Are you sure that was a good decision?’” she said.

But the bakery seems to have spurred a retail revival. Across the street, at No. 122 Montague, the novelist Emma Straub is opening a new branch of her bookstore, Books Are Magic, a store so cute that it has more than 200,000 followers on Instagram. (The bookstore’s original location is in Cobble Hill.)

Both businesses were brought to the neighborhood by the Brooklyn Heights Association, a more than century-old civic group working with landlords, residents and business owners to enliven the local commerce. “The older generation might not love it, but I do think a really cool bar on Montague Street is the next thing we need to go after,” said Erika Belsey Worth, the association’s president.

She may have gotten her wish. In June, Sean Rembold, a former chef of the Williamsburg mainstays Marlow & Sons and Diner, and his wife, the fashion designer Caron Callahan, opened Ingas Bar, a chic neighborhood restaurant at 66 Hicks Street, a space formerly occupied by the neighborhood stalwart Jack the Horse Tavern.

Ingas is often packed with a crowd who look like they Ubered over from the cooler parts of Brooklyn. On a recent evening, Amy Schumer was hanging out at the bar. 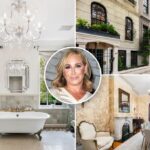 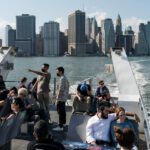