Home » Why You Should Try Crevice Gardening: ‘This Is the Future’
Life

Why You Should Try Crevice Gardening: ‘This Is the Future’ 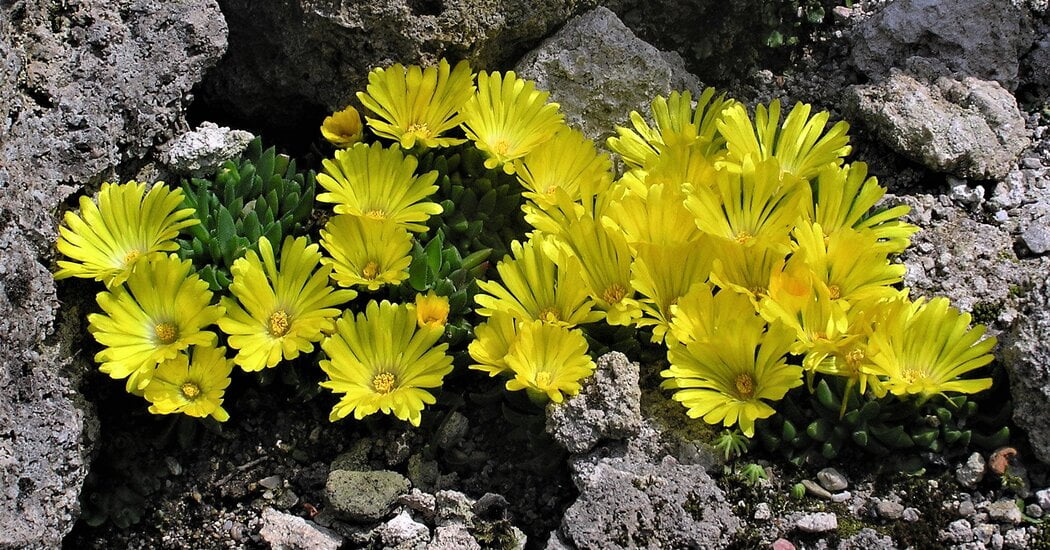 Closer to home, you need only look underfoot to grasp the operating principle: See that single dandelion with its foothold in a tiny crack between curbstones or sidewalk pavers, no soil in sight? Its vibrant blooms scream in defiance of everything gardeners think they know about what plants want — just as a Saxifraga or Silene clinging to mere fissures in a vast, rugged landscape do.

A new book, “The Crevice Garden: How to Make the Perfect Home for Plants From Rocky Places,” encourages us to emulate what’s at work in such scenes, large and small.

Its authors, Kenton J. Seth, from Colorado, and Paul Spriggs, from British Columbia, are rock-garden designers who sometimes collaborate. With an ambitious lecture schedule, their 5,000-plus-member Modern Crevice Gardens Facebook group and now a book, they have become de facto ambassadors of crevice gardening, recruiting a wider and younger cohort to the practice.

The two take their inspiration not just from their exploration of some of the world’s most rugged spots, but also from the modern pioneers of crevice gardening, who have been working in the Czech Republic since the mid-1980s.

And yes, from that curbside dandelion, as well — which rates a photograph in the book.

“That photo could almost be symbolic of the beginner crevice garden,” said Mr. Spriggs, who cultivates not dandelions, but dwarf Eurasian alpine Daphne shrubs, which may live for decades but only reach a foot across, and a tiny, rare bellflower with outsize flowers (Campanula choruhensis) from Turkey. “Plants are growing in cracks of rocks all over the world, and what we’re trying to do is showcase those plants — especially the extra-pretty ones.”

Pretty, and functionally forward-facing: These are gardens that work, even where water is increasingly scarce.

“Rock gardening will no longer elicit a yawn, because this is the future,” said Noel Kingsbury, the British horticulturist, as he introduced Mr. Seth and Mr. Spriggs at one of his popular Garden Masterclass webinars in April.

This is not your grandmother’s rock garden. For one thing, it’s heavier on the rocks, which cover at least half of the garden’s surface area. Like a sedimentary rock formation turned on end, stones are often stacked on edge — like plates in a dish drainer — vertically or at a gentle, oblique angle for extra drama.

Crevice gardens are usually berm-like rather than flat, giving the impression of a natural outcrop and allowing the plants’ roots to run deep (although not very far sideways). These gardens range from naturalistic to high modernist art, and can be scaled down to fit in a trough or up for a botanical garden or park.

In planning their book, Mr. Seth and Mr. Spriggs had to agree on the defining details, because most rock gardens have some crevices — the narrowest spaces between stones — along with wider planting pockets. How much space is there between the rocks in a typical crevice garden? An inch or less, they decided.

All the courses are meant to be parallel — again, evoking natural stratification — although the rocks may vary in size. And by “rocks” they meant a range of things, from ripped-up pieces of a concrete patio or driveway to slabs molded from homemade lightweight hypertufa, the do-it-yourself blend of Portland cement, peat moss, perlite and water used to make troughs.

Making a crevice garden, Mr. Seth and Mr. Spriggs acknowledge, is no small undertaking. Nor is it inexpensive, if you have to buy the rock and have it brought in. But as with gravel gardens, aftercare is minimal compared to that required by traditional garden beds.

A miniature crevice garden, however, can be created using a sturdy stone or hypertufa trough or a galvanized tub, and makes a good starter project.

Despite the scale, the same engineering principles apply: Stones are not inserted into a flat canvas of soil; instead, the growing medium is mounded up to simulate a mini-mountainous terrain and allow a deep root run.

As with any rock garden, the medium is usually sandy and nutrient-poor — “rubbles, gravels and sands,” Mr. Spriggs said. If you’re using a container, he recommends mixing seven parts coarse sand with one part pumice or perlite and two parts soil.

To fit into the crevices, plants must be small and almost always bare-root. After planting, they are finished with a top-dressing of broken slivers or rock chips.

One of the most common starter designs that the men are asked to create is a bit bigger than a container garden. It’s maybe a three-by-three-foot mound — “a pocket garden,” in Mr. Seth’s words, or “a small outcrop,” in Mr. Sprigg’s.

This fits in what they call the “awkward spots” that every yard has, beside a garage, for example, or a cellar bulkhead. A crevice garden converts this unused space into a focal point, rather than something you wish you didn’t have to look at.

Whatever the scale, the intention could simply be adding “a beautiful feature in a xeric environment that can lift plants a little closer to the viewer,” Mr. Seth said, or supporting plants you could not otherwise grow in your conditions and space.

It’s “a place to squeeze in another collection,” Mr. Spriggs said. Or actually more than one, he added, as opposite sides of even the smallest crevice garden offer exposures suited to different plants.

Speaking of finding more space: What about a crevice garden as an alternative to a lifeless brick or concrete retaining wall? “A plantable, porous, habitat-creating, pollinator-feeding garden” is how Mr. Seth described this greener choice.

At botanic gardens and elsewhere, crevice gardens are now serving as refugia for under-pressure species from extreme natural habitats.

Far Reaches Farm, a rare-plant nursery in Port Townsend, Wash., sought “to successfully grow and conserve many difficult-to-cultivate alpine plants that are on the leading edge of climate-change extinction,” said Sue Milliken, who operates the nursery with Kelly Dodson.

So far, so good: The vulnerable plants easily survived the 107-degree heat dome of last summer, Mr. Dodson said, “which gives us great hope that we can conserve and distribute these precarious genetics.”

Plants That Thrive in Crevices

Crevice gardens are ideal for plants that Mr. Seth and Mr. Spriggs describe as “native to the very edge of where life can exist.” These are plants you would likely torture in fertile soil high in organic matter — environments that alpine and saxatile plants (which grow on or among rocks) abhor.

Cyclamen, another option, is known for beautiful flowers, but also has handsome foliage. Rock pinks (Dianthus) form tight, bloom-covered domes just a few inches across. And the smaller-scale bellflowers (Campanula) are crevice-garden standards.

More surprising, maybe, is how well some conifers do in such confinement. Examples include dwarf Alberta spruce (Picea glauca, like the variety Pixie Dust), any miniature mugo pine (Pinus mugo) or Mr. Spriggs’s favorite, the subalpine fir Abies lasiocarpa DuFlon.

These are “the stoic sentinels,” he and Mr. Seth write, adding structure and color even in winter. One conifer that Mr. Spriggs inherited is now 70 years old, and just 18 inches tall, but its trunk is six inches in diameter.

Welcome to the Crevice Community

Crevice gardening may seem like a brave new world, but there is an established culture and community to support newcomers, even beyond the Facebook group. The 30-plus chapters of the North American Rock Garden Society, with their websites, newsletters and meetings, are a resource for learning — and for finding unusual plants.

“You can never get bored,” Mr. Seth said. “You never run out of plants to play with, to experiment with.”

What persuades practitioners to heft tons of stone rather than making gardens with far less effort? One factor: A changing climate is requiring gardeners in parts of Colorado, where Mr. Seth lives, and elsewhere to forgo traditional water-hungry plantings.

“We are having to give up so much, but we still need something that’s beautiful,” he said. “So we’re looking to nature for our garden inspiration.”

In these designs, as in the rocky wild, the aesthetic tension between the medium and its inhabitants is at the core of the attraction.

“It’s the lifelessness of a rock versus the gentleness of that gorgeous little flower,” Mr. Spriggs said. “How can something so beautiful exist in such a harsh, harsh place — how is this even possible?”

Margaret Roach is the creator of the website and podcast A Way to Garden, and a book of the same name.