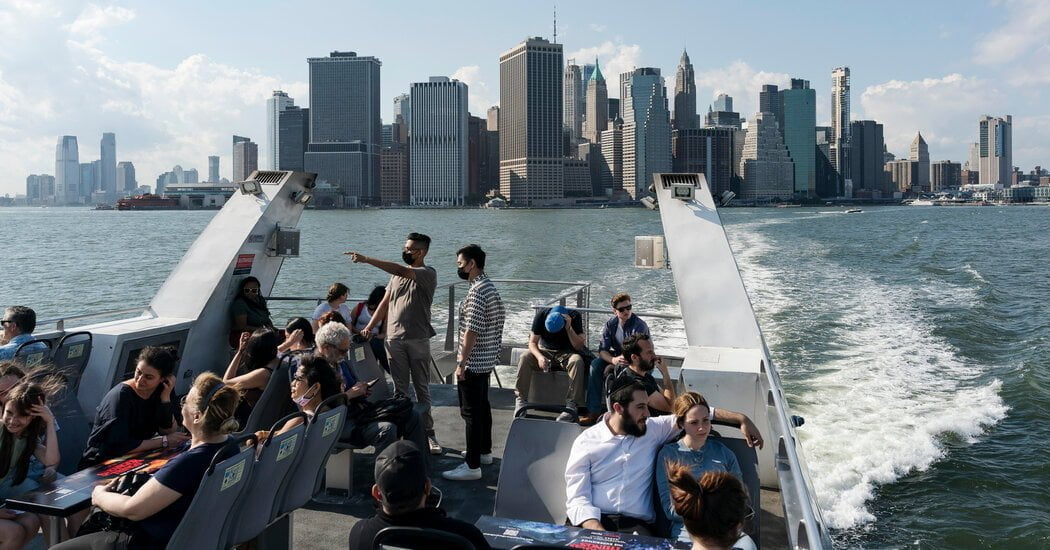 Looking for a fresh way to scout Brooklyn’s waterfront? Try a ferry. For $2.75, you can explore ports of call that cradle a bounty of cultural and culinary adventures. Island-hopping from Manhattan can begin at the Pier 11-Wall Street landing, where the salty air is invigorating and anticipation builds as vessels with names like Ferry Godmother, City Fishy and McShiny pull in to whisk you away.

NYC Ferry launched in 2017 and has expanded its reach ever since. Former Mayor Bill de Blasio championed the city-subsidized service (even far more than the city apparently knew), operated by Hornblower, a private company based in San Francisco, as a way for subway-starved neighborhoods to have a convenient transit option. Tourists can benefit, too. Snack bars, fairly clean bathrooms and a top deck with epic, windswept views of the Brooklyn Bridge and glittering shorelines are part of the ride.

Six daily routes link all five boroughs. A Governors Island shuttle runs on weekends through Sept. 11, according to a NYC Ferry spokeswoman. Vessels have a capacity of 150 to 350, relatively small considering the Staten Island Ferry can fit thousands. The longest line on balmy days is for Rockaway, Queens (tip: go before noon). Of 25 landings, eight are in Brooklyn; Greenpoint is temporarily closed owing to repairs. Dumbo/Fulton Ferry has its charms, including stunning Manhattan skyline views, waterfront parks, the century-old Jane’s Carousel and Bargemusic, a moored barge presenting chamber music concerts. The Brooklyn Navy Yard, North Williamsburg, South Williamsburg and Brooklyn Army Terminal/Sunset Park are more for commuters than sightseers.

Three stops that are fun for separate day trips are Brooklyn Bridge Park’s Pier 6, Red Hook and Bay Ridge, all along the South Brooklyn route. Don’t forget to pack sunscreen.

On a recent sweltering day, a merciful canopy of trees shaded the path through Brooklyn Bridge Park, just off the landing at Pier 6 in Brooklyn Heights, bordering Cobble Hill. Families and groups of friends can easily spend hours picnicking on pesticide-free lawns and make use of sandy volleyball courts and playgrounds with two-story slides and cooling water jets. For get-up-and-go types, there’s a lot more to see.

You can console yourself about never being able to afford to buy a place there with drinks at the Long Island Bar (110 Atlantic Avenue), a polished, retro spot with ample sidewalk seating. A co-owner, Toby Cecchini, ignited the craze for Cosmopolitans in the 1980s and here blends up a cheeky frozen version. There is nothing silly about its tangy, potent kick. The frozen piña colada is lusher, like soft-serve with three kinds of rum. The food makes a strong impact, too, from a jar of smoked trout with a lavish lid of trout roe ($15) to a satisfying, old school double-patty cheeseburger piquant with pickles and paired with battered fries ($20).

From there, inspect Atlantic Avenue, a commercial artery of enticing shops: Salter House (119 Atlantic Avenue), for instance, has coffee, tea and curated domestic goods; Sahadi’s (187 Atlantic Avenue) is a Middle Eastern food emporium that has anchored the neighborhood since 1948.

Eating options abound near the waterfront, such as the Italian-ish Popina (127 Columbia Street). Unwind over a mezcal negroni ($15) and hot chicken Milanese ($27) in its expansive backyard. Before reboarding the ferry at Pier 6, try for a bar stool at Pilot, a meticulously restored wooden schooner docked on the north side of the pier. Perhaps you’ll catch an alluring sunset while enjoying a drink and a half-dozen expertly shucked oysters ($19 to $24), pushing this pleasure trip until the last boat departs at 9:30 p.m. on weekends.

If Red Hook wasn’t such a pain to reach by subway, its small-town magic might be overrun by an influx of people clamoring to feed on its good energy. NYC Ferry appears to be an amenable solution, allowing visitors to flood this Brooklyn pocket’s independent businesses and then go back where they came from (9:21 p.m. is currently the last ferry out on weekends).

Within a few blocks of the landing is Pioneer Works, a contemporary artistic center housed at 135 Imlay Street while its main compound undergoes renovation. Also by the waterfront is the beloved Sunny’s Bar (253 Conover Street), a roadhouse with frequent live music, and Strong Rope Brewery, a cavernous tap room whose outdoor tables sport views of the Statue of Liberty. There is no food at either place; for ballast, procure a thin-crust pizza with fresh, creative ingredients ($18 to $21) from the nearby Hoek (117 Ferris Street).

On Van Brunt Street is Record Shop (360 Van Brunt Street), specializing in vinyl and used books you always meant to read. Antiques merchants, art galleries, clothing stores, wine shops and restaurants take up many of the other storefronts.

For those who prefer dining and drinking outside in warm weather or for Covid-wary reasons, Fort Defiance has pleasant sidewalk seating. Grindhaus, another neighborhood staple, offers a peaceful backyard. The chef Kevin Speltz’s mushroom tempura with fish sauce vinaigrette ($19) and coconut-infused purple potato dumplings ($17) are wonderful. Duck leg confit, crisply standing up to any Parisian specimen, was splayed atop a waffle saturated with sweet chili and brown butter ($27), a brilliant combination.

The ferry to Bay Ridge is an exhilarating voyage, cutting through the waves on the East River, past Governors Island and aiming for the majesty of the Verrazzano-Narrows Bridge. It’s the last stop on the South Brooklyn route so everybody must disembark. Walk the pier, hemmed by anglers patiently fishing, and head south to the idyllic Narrows Botanical Gardens, flourishing with rosebushes and a menagerie of birds loud enough to drown out the Belt Parkway traffic.

This southwest corner of Brooklyn is a melting pot, largely populated over the last century by Norwegian, Syrian, Italian, Irish and Greek immigrants. Thoroughfares like Third Avenue and Fifth Avenue have so much diversity in street life and languages they feel like multicultural bazaars.

“There are Latinx and Fujianese influxes in addition to the existing Palestinian, Egyptian and Yemeni populations,” said Dan Hetteix, the producer of the progressive podcast Radio Free Bay Ridge. “Bay Ridge is the experimental proving ground for so many culinary artists, bringing amazing new vibrancy to the neighborhood. We have some of the cheapest and best cuisine in all of Brooklyn.”

That’s a tall claim, but it’s hard to deny after sampling the Mexican food at Yucusiama (484 77th Street), which opened last year in a small storefront. Housemade corn tortillas are almost as light as crepes, wrapping a quesadilla bursting with grilled chicken, raw onion and melted Oaxacan cheese ($8). Tortas, among the world’s most underrated sandwiches, are built on soft buns brushed with refried beans and mayonnaise. There are several fillings to choose from (all $9); the suadero (thinly sliced beef flank) layered with avocado, green pads of cactus, jalapeños and stretchy cheese, is reason for a return trip.

Italian restaurants have not disappeared from Bay Ridge; Piccante (7214 Third Avenue) ranks among the best. Modest in looks, the kitchen turns out world-class fresh pasta for cushiony beef lasagna ($15) and pappardelle threaded with honey-braised short rib ragù ($18), fine to hog for yourself if you want to gain five pounds.

Food might be the most compelling magnet, but artists are moving into the neighborhood, too, Mr. Hetteix said. Galleries have popped up, including Underland (457 77th Street, Unit 1) and Stand4 (414 78th Street), in a former medical office.

Charting the wonders of Bay Ridge is considerably easier than when the explorer Giovanni da Verrazzano sailed these waters nearly 500 years ago, as long as you don’t miss the last ferry at 9 p.m.

The E.U. health authorities call for a second Covid booster for older people.