After Pelosi’s arrival, China announced military drills in nearby waters. 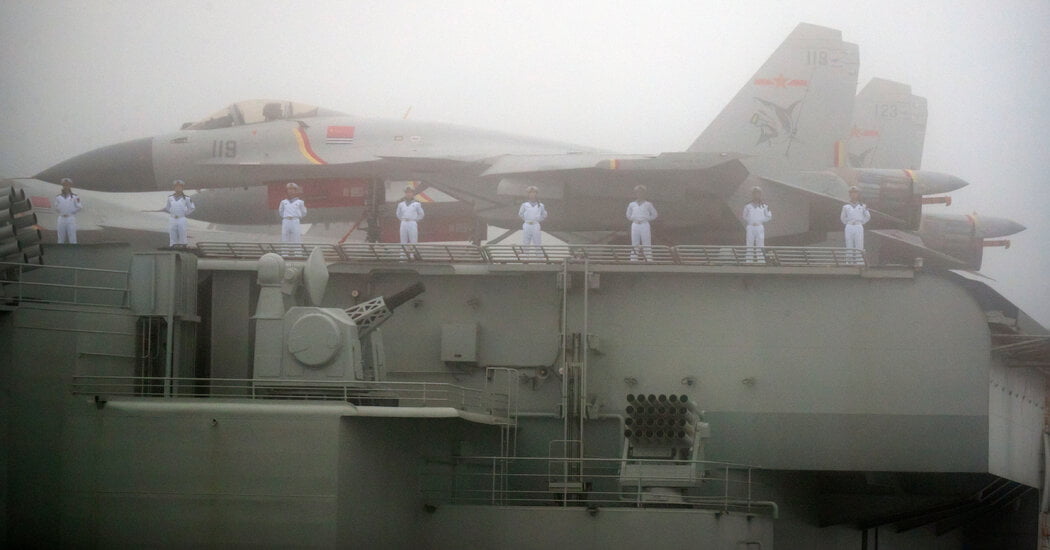 Shortly after Speaker Nancy Pelosi’s plane touched down in Taiwan, China’s military said it would conduct drills that appeared to infringe on Taiwan’s territorial waters, setting the stage for a potential showdown over the self-governed island between China and the United States.

Beijing announced plans for six zones encircling Taiwan where it said it would carry out live-fire military drills from Thursday to Sunday, according to a statement released by Xinhua, China’s state news agency. Ships and aircraft were warned against trespassing those areas — some of which overlap with the island’s territorial waters — for “safety reasons,” the statement said.

In a separate statement, China’s People’s Liberation Army said that starting on Tuesday evening, it would begin conducting a series of joint naval and air exercises in the waters and airspace to the north, southwest and southeast of Taiwan, according to a statement attributed to Col. Shi Yi, spokesman for China’s Eastern Theater Command.

Those exercises would include “long-range live firing in the Taiwan Strait” and “regular-guided fire testing in the eastern waters” off Taiwan, the statement said. The timing leaves open the possibility that the drills could begin while Ms. Pelosi, the speaker of the House, is still in Taiwan.

Chinese state media has kept up a steady drumbeat of menacing messages. The official People’s Daily newspaper wrote onsocial media on Tuesday that “people who play with fire will burn themselves,” apparently echoing similar warnings issued by Chinese officials over the past year.

The Global Times, a nationalist Chinese newspaper, said in an editorial that “China’s countermeasures will not be one-off but a combination of long-term, resolute and steadily advancing actions.”

Song Zhongping, an independent Chinese military analyst, said the two announcements were about a single drill. He said that preparations would begin on Tuesday, but that the actual live fire exercises would take place from Thursday to Sunday.

“The People’s Liberation Army’s struggle with Taiwan is going to intensify in frequency and it will escalate the scale of force to tackle the U.S. government’s provocations,” he said, adding that drills that cross the median line that divides the waters between Taiwan and China would become more frequent.

The planned drills would likely be the most assertive show of Chinese military power in the region since the Taiwan Strait crisis of 1995-96, when China fired missiles to intimidate the island and President Bill Clinton ordered aircraft carriers into the area. The exercises would effectively block access temporarily to some commercial shipping lanes and Taiwanese ports, analysts said.

Still, the drills appeared to be largely a signaling exercise intended to project strength at home and abroad.

“They are signaling that we really don’t like this and that we want to see less of this,” said Joe McReynolds, senior China analyst at the Washington-based Center for Intelligence Research and Analysis. “They are not signaling that we are imminently about to go to war.”

One concern, however, is that the fast-moving situation could lead to an accidental encounter that could spiral out of control. It remains to be seen whether and how Taiwan and the United States will respond to China’s actions.

“The looming Chinese military exercises would bring great pressure to the Taiwanese military,” said Chieh Chung, a security analyst with the National Policy Foundation in Taipei. “If a slight accident occurs, the low trust between both sides of the strait and the lack of experience in dealing with crises is likely to escalate the tensions, and lead to irreversible consequences.”

The Chinese have taken other countermeasures in response to Ms. Pelosi’s visit to Taiwan. On Tuesday, before she arrived, China banned shipments from more than 100 Taiwanese food exporters — an apparent attempt to ratchet up economic pressure.

China has increasingly sought to leverage its status as Taiwan’s largest trading partner, and has moved several times to restrict the island’s access to its vast consumer market in recent years.

Taiwan’s defense ministry said on Twitter that several Chinese state media reports of Su-35 fighters crossing the strait on Tuesday were “fake news.” The ministry said separately that 21 Chinese military aircraft had probed airspace near Taiwan on Tuesday, in what has become a near-daily occurrence in recent years.