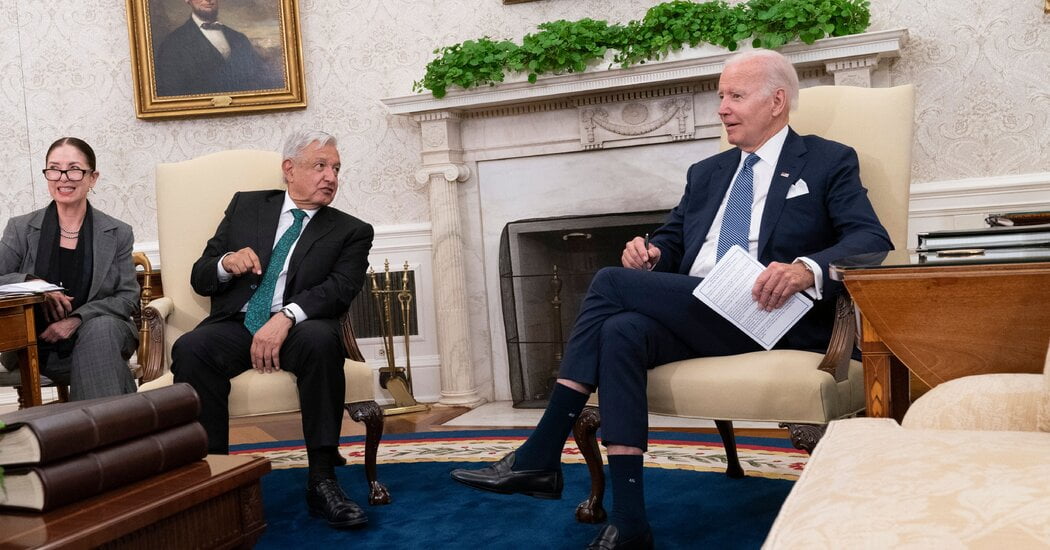 WASHINGTON — One month after snubbing President Biden by refusing to attend a summit meant to show American leadership, President Andrés Manuel López Obrador of Mexico joined Mr. Biden at the White House on Tuesday to shore up a relationship the United States needs to slow mass migration and bolster economic ties.

The two leaders sought to reaffirm a partnership they both agreed was necessary to address global inflation amid the Russian invasion of Ukraine, migration and the surge in fentanyl trafficking. But Mr. López Obrador made clear there was still tension between the men.

The Mexican president, who seldom passes up an opportunity to poke the Biden administration, at one point mentioned how Americans living along the border have crossed into Mexico for gas at lower prices amid soaring inflation.

In a roughly 30-minute response to Mr. Biden’s brief opening remarks, Mr. López Obrador at times appeared to be giving a history lecture, rather than a policy framework, citing the partnership between the two countries under President Franklin D. Roosevelt and his New Deal policies.

“We had circumstances that were quite similar to our existing circumstances,” he said. “And from those policies, we should be extracting good lessons.”

Mr. López Obrador also touched on one of Mr. Biden’s greatest political vulnerabilities: high gas prices. After telling Mr. Biden he hoped “that Congress approves or passes” proposals to lower gas prices, Mr. Biden retorted, “It has gone down for 30 days in a row.”

The Mexican president also noted that Americans have been crossing the border to buy gas, saying it is a dollar cheaper. He did not note that it costs less in Mexico because the government subsidizes domestic gas prices with money it makes from the crude oil it produces.

Mr. Biden’s aides insist the relationship between the two leaders is productive. Despite not attending Mr. Biden’s summit in June, Mexico did support a declaration completed during the gathering that committed to cooperating on expanding legal pathways for foreign workers, investing in border protection, tackling smuggling networks and addressing record-high illegal migration.

“We see Mexico as an equal partner,” Mr. Biden said on Tuesday in remarks lasting just under 10 minutes, noting the need to strengthen the economy and approach migration north “as a shared hemispheric challenge.”

Throughout his presidency, Mr. Biden has stressed the need to collaborate with Mexico and Central American nations to deter soaring illegal border crossings — a humanitarian crisis that has challenged his White House. In recent years, a majority of migrants crossing the border have been Mexicans, a shift from much of the Obama and Trump administrations when Central Americans entered the United States in record numbers. Mr. Biden credited Mr. López Obrador “for also stepping up” to issue visas for Central American migrants to work in Mexico.

Mr. Biden added that both the United States and Mexico would invest in updated infrastructure along the border. The nations are working to improve technology along port entries to better detect narcotics, as well as surveillance towers and sensors to help border agents track illegal crossings, according to a senior administration official. While the Trump administration invested billions of dollars to construct hundreds of miles of physical border wall, Mr. Biden campaigned on investing in technology to deter such crossings.

Mr. Biden, noting the deaths of 51 migrants who were found trapped in an abandoned truck in San Antonio, also said the two nations needed to intercept smugglers encouraging migrants to cross the border. The administration began an anti-smuggling initiative with other nations that has resulted in roughly 3,000 arrests since April, he said.

“We need every country in the region to join us,” Mr. Biden said.

Mr. López Obrador cited the expansion of temporary work visas for Mexicans and Central Americans as one of the most effective ways to deter migration. During the summit last month, Mexico committed to providing temporary work for at least 15,000 Guatemalans, while the United States said it would dedicate $65 million in grants to agricultural employers that hire farmers from Central American nations.

Andrew Selee, the president of the Migration Policy Institute, a research institute in Washington, lauded the effort but said implementation would most likely take time.

“It’s slow going because they need employers to want to go recruit in Central America and they need to make it as easy for them to process the visas,” he said.

Mr. Selee said the two leaders were probably more focused on addressing the migration and economic woes affecting both of their nations, rather than Mr. López Obrador’s absence at the summit.

In some ways, Mr. López Obrador’s relationship with Mr. Biden is more complex than the one he had with former President Donald J. Trump, who threatened to impose tariffs on Mexico before ultimately gaining the country as a crucial ally for his border policies.

Despite Mr. López Obrador’s efforts to champion himself as an advocate for migrants, he also agreed to comply with U.S. policies that empowered American border agents to rapidly turn migrants back to Mexico. In exchange, Mr. Trump mostly refrained from pressing him on domestic matters.

Mr. Biden has returned to a broader approach, one where the United States pursues national interests while also emphasizing the need to counter corruption and ensure the protection of human rights. He is, however, just as reliant on Mexico to deter migration, giving Mr. López Obrador significant leverage. For much of this year, the administration continued to lean on restrictive Trump-era policies that depend on cooperation with Mexico.

The tension between the leaders has existed since Mr. Biden was elected, when Mr. López Obrador initially refused to recognize his victory. The Mexican president has also pursued energy policies that jeopardize American investment in the sector, prompting the Office of the U.S. Trade Representative to express in March “serious concerns with the deteriorating trajectory of Mexico’s energy policies.”

Mr. López Obrador vowed to “start a campaign to tear down the Statue of Liberty” if Mr. Assange is “sentenced to the maximum penalty” in the United States.

“There shouldn’t be selfishness between countries, peoples that are neighbors and friends,” Mr. López Obrador said toward the end of his remarks. “President Biden,” he added, “we trust you because you respect our sovereignty.”

Mr. Biden responded by noting that his counterpart had “a lot of important things to say.”

“The thrust of what you’re saying, we agree with,” he said. “We need to work closer together.”

FANTASTIC DIYS FOR EVERYONE || 3D PEN and GLUE GUN CRAFTS