Home » Ahead of Pelosi’s Trip, Quiet Defiance in Taiwan
News 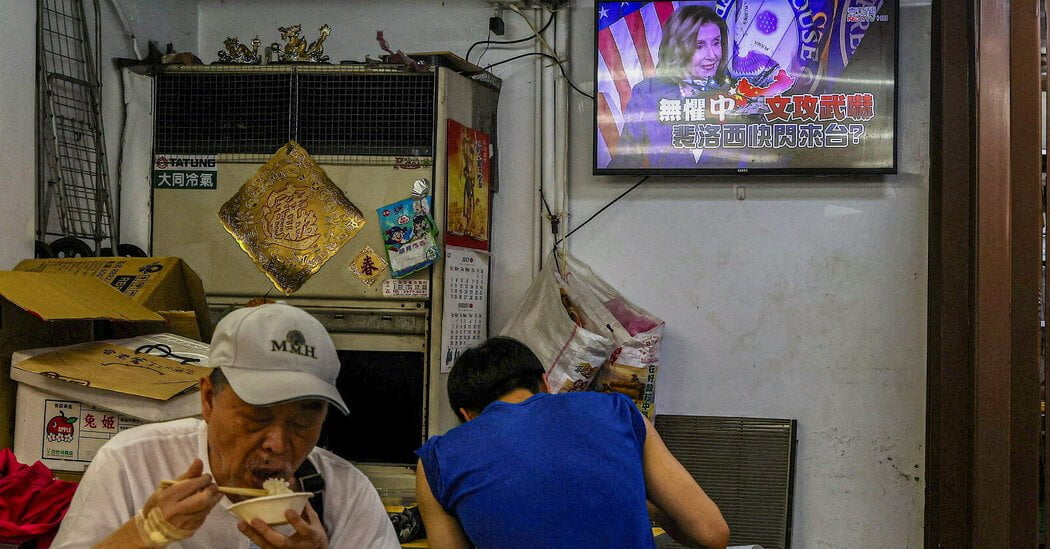 TAIPEI, Taiwan — In Washington, there has been anxious debate over whether Speaker Nancy Pelosi should risk the visit. In Beijing, there have been anger and threats. In Taiwan, where Ms. Pelosilanded late Tuesday, the new flare-up in tensions has been met with a subdued defiance.

Politicians from Taiwan’s two main political parties have offered support for the trip, a sentiment echoed by many in the self-ruled democracy of more than 23 million people, which China claims as its own. While China released videos of planes and missiles flying to menacing music, one popular meme in Taiwan remade Ms. Pelosi as a powerful Taoist goddess. A Taiwanese politician wagered a chicken cutlet giveaway over her visit.

Inured to living in one of the world’s most dangerous geopolitical flash points, Taiwanese people have largely taken the prospect of the visit in stride. That steely nonchalance belies a political reality that has been hardening over the past decade: Many in Taiwan have grown weary of China’s threats and crave support from the United States.

Ms. Pelosi’s trip is the highest-level visit by an American official in 25 years, and a diplomatic coup, if mostly a symbolic one, for Taiwan. Such prominent demonstrations of international support are rare for Taiwan, which Beijing has systematically worked to isolate from global institutions and diplomatic recognition.

The talk of a visit has not been without its anxieties for Taiwan. On Tuesday morning, its military said it would strengthen combat readiness in anticipation of a potential response from China, while the island’s stock market fell almost 2 percent over geopolitical concerns about the trip that broadly dragged down global shares.

President Tsai Ing-wen of Taiwan has tread carefully into the fraught political moment. She has made no public comment about the trip, probably to avoid exacerbating an already tense situation. Known as a cautious and pragmatic operator, Ms. Tsai has let others speak out instead.

Some support has come from unexpected corners. Two stalwarts of the generally China-friendly Kuomintang party, former President Ma Ying-jeou and the party chairman Eric Chu, cautiously welcomed the possibility of Ms. Pelosi’s visit over the weekend.

With local elections looming, politicians in Ms. Tsai’s party spoke more freely. Kolas Yotaka, a former Democratic Progressive Party legislator and candidate for magistrate in Hualien County, said that the decision of whether to make the trip was Ms. Pelosi’s and that most Taiwanese would support the visit.

“It makes us feel less isolated, and gives us hope to see that even in difficult circumstances, there are still people who maintain their beliefs and ideals,” she wrote.

While some Taiwanese people criticized the visit as unnecessarily provocative, many others echoed Ms. Kolas Yotaka’s sentiments. Chen Mei-ying, a sales manager in the central city of Taichung, called it “a boost for Taiwan’s democracy,” adding that “we should face the threat of China directly and welcome her bravely.”

Throughout much of its modern political existence, Taiwan has been caught between two giant rivals: the United States and China.

For decades, it was subjected to oppressive martial law by the U.S.-backed regime of Chiang Kai-shek, who fled to the island after being overthrown by Mao Zedong’s revolution. In the 1950s, Beijing and Washington twice came close to going to war when China attacked Taiwan-controlled territories.

Cold War dynamics eventually yielded to more pragmatic ties in the 1980s and 1990s, as Taiwan democratized and China opened up its economy following the self-inflicted devastation of the Cultural Revolution.

The limits of the new accommodation were tested in 1995 and 1996, when China objected to a visit by Taiwan’s then-president, Lee Teng-hui, to Cornell University, his alma mater. China fired missiles near Taiwan’s main island as a warning to Mr. Lee, and again as Taiwan prepared for its first open presidential election. That crisis came to a close when President Bill Clinton sent two carrier groups from the 7th Fleet to opposite ends of the Taiwan Strait.

Today, Taiwan is again caught in the web of great-power hostilities. China is both its largest trading partner and its most serious existential threat. Under China’s leader, Xi Jinping, military posturing has become more prevalent, with Chinese military planes and ships often cruising near the island.

The United States, Taiwan’s primary guarantor of security, has often seemed distracted by domestic issues and conflicts elsewhere — most recently, the war in Ukraine — even as Taiwan enjoys rare bipartisan support from Congress. An economic powerhouse, Taiwan is also a keystone of the electronics supply chain and perhaps the world’s most important source of advanced microchips.

Although a stasis between the two powers exists, it is not clear how much longer it may last, as posturing from each side over China’s claims to the island, and the seas around it, have stretched a tense relationship thin. For Taiwanese, often overlooked in the great-power Sturm und Drang over their own future, Ms. Pelosi’s visit offers an uncommon bit of recognition for a democratic and economic success story of which many Taiwanese are proud.

“Most Taiwanese will be exhilarated, and see it as an important sign of strong U.S.-Taiwan relations, as well as a positive recognition of Taiwan’s progress toward democracy by the world’s leading democratic superpower,” said Wen-Ti Sung, a Taiwan expert at the Australian Center on China in the World at Australia National University.

Mr. Sung noted that some commentators saw the drama over the possible visit as political theater, but, he argued, “sometimes symbolism is substance,” citing President John F. Kennedy’s speech in West Berlin at the height of the Cold War.

“For Taiwan, such a symbolic gesture would be particularly meaningful for U.S.-Taiwan ties in the absence of official relations, and especially after the onset of the Ukraine war,” he said.

Within Taiwan, partial bipartisan support for Ms. Pelosi’s visit underscored how far Taiwanese politics have shifted over the past decade.

Where mainstream public opinion in Taiwan once looked to China as a critical trade partner and shied away from anything that could shake the relationship, now there is more willingness to push back. After years of Chinese threats, military expansion and the systematic dismantling of Hong Kong’s democratic institutions, support in Taiwan for China’s views have become untenable for most politicians.

If Ms. Pelosi meets with the Taiwanese president, it will not be Ms. Tsai’s first bold move to bring the United States closer. Ms. Tsai’s phone call to congratulate President-elect Donald Trump in 2016 broke with precedent and rankled Beijing, with only negligible consequences for her or for Taiwan.

When asked Tuesday morning about Ms. Pelosi’s trip, Taiwan’s Ministry of Foreign Affairs declined to comment. One of the few major officials to address it was Premier Su Tseng-chang, who on Tuesday expressed strong gratitude for Ms. Pelosi’s “support and kindness toward Taiwan,” adding that “any friendly foreign guest would be extremely welcome.”

Not all in Taiwan, a boisterous democracy, were supportive, with some pointing to the ways that Ms. Pelosi’s trip made Taiwan look like a pawn in a larger geopolitical fight.

“Taiwan is in a passive position. It can only be that way between two great powers,” said Liu Shao-chang, a 65-year old retired marketer in the southern port city of Kaohsiung.

He said he was not worried about the visit, but only because there was not much Taiwan could do about it.

“Taiwan can’t express its position: We can’t refuse, and we can’t welcome her either. If we welcome her, China will protest,” he said.

Planning a Garden from Scratch: Notes from Designing a Painter’s Garden