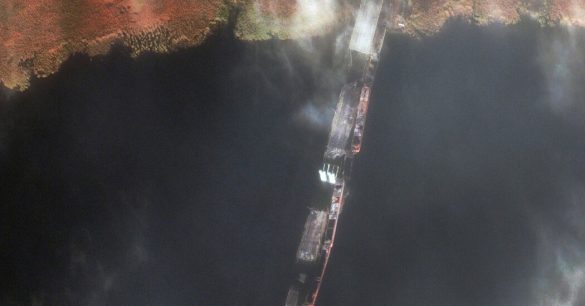 KYIV, Ukraine — The Antonivsky Bridge, the main crossing over the Dnipro River in the city of Kherson, was blown up before dawn on Friday after most Russian forces retreated and just before Ukraine’s forces entered the city.

Videos and photographs posted to social media showed the bridge to be heavily damaged. It was not immediately clear what caused the explosion. Rybar, an unofficial but influential pro-war Russian military blog, reported that retreating Russian forces had destroyed it at 5 a.m., posting footage that it said showed the strike that brought it down.

One Kherson resident, who asked to be identified by his first name Ivan for security reasons, said in a text message that he had heard an extremely powerful explosion just before dawn. It was unlike anything he had heard in months of fighting.

“It was very foggy in the morning and we couldn’t see much, but people from Antonivka say that the roofs of the houses were taken away by the explosion wave,” Ivan said, referring to the area around the bridge.

The apparent destruction of the bridge left any Russians remaining in the city with only an ad hoc network of ferries and pontoon bridges across the river. The other major crossing is 50 miles to the north, at the Kakhovka dam.

Ukrainian troops were closing in on the dam from the north, but as of Friday afternoon it still appeared to be under the control of Russian forces.

Control of river crossings and the bridges that span them has proved a critical factor throughout the course of the war. Paramount among them has been the Antonivsky Bridge.

It had been the main transit route for Russian supplies coming in from Crimea, which Moscow annexed in 2014, to Kherson, the only major city that Moscow managed to seize after President Vladimir V. Putin of Russia launched his invasion in February.

When Ukraine began its southern counteroffensive in late August, it started by targeting the bridge as part of a broader effort to isolate Russian forces based west of the Dnipro River, which runs the length of Ukraine and bisects it into east and west.

Throughout, it sought to keep the bridge under Ukrainian control, making it difficult and risky for the Russians to move large amounts of equipment or forces over the span. The Ukrainian military has been careful not to destroy it, apparently wanting to preserve it, in part, to pursue departing Russian forces.

Residents said that the destruction of the bridge gave a measure of confidence that Moscow’s troops would not soon be back. Russian troops could attack the city from across the river, locals said, but the occupation appeared to be at an end.

A few hours after the bridge was blown up, residents took to the streets, flags in hand, awaiting the arrival of the Ukrainian Army. 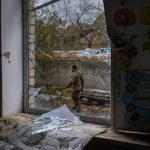 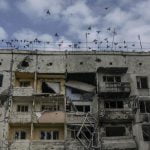 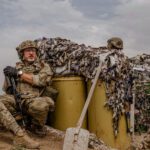 Judy Woodruff Is Too Busy for Nostalgia