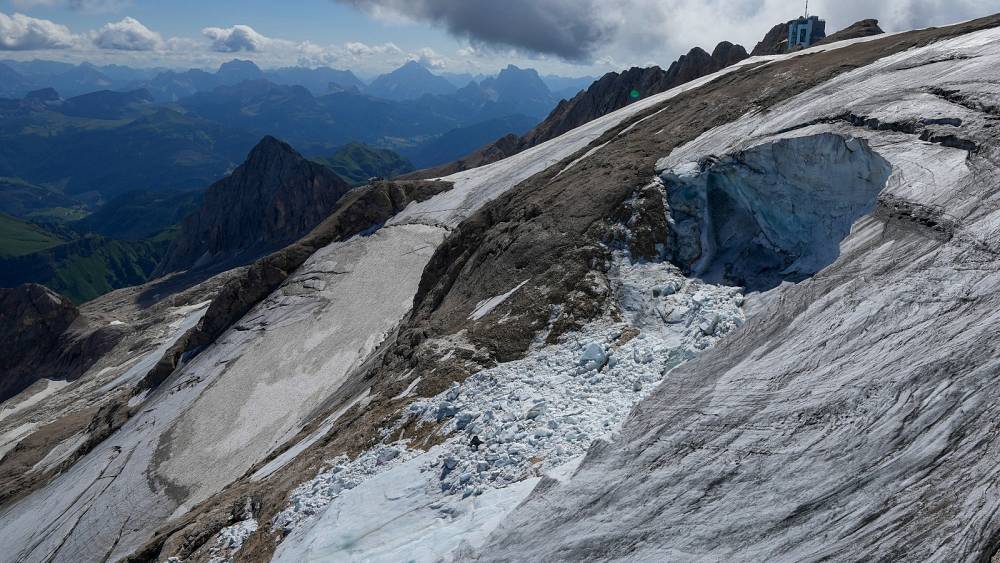 It’s been a difficult few weeks on the climate front here in Italy.

Warm temperatures are part of the problem, but clearly, this hasn’t just got to do with the seasons changing.

The recent deaths of 11 people after a glacier collapsed on a popular hiking trail on the Marmolada mountain wasn’t just an accident.

With temperatures that have increased by around 2 degrees Celcius — twice the global average — not only has ice been melting faster in the past few years, but experts reckon that events like this are likely to increase.

Italian scientists have warned that the Marmolada glacier will no longer exist in the next 25 to 30 years as glaciers in the Alps retreat.

It’s neither the first nor the last example of what has been unfolding in front of our eyes for quite some time. In 2019, things already looked pretty bad.

Back then, I was reporting on the Planpincieux glacier in the Italian Alps – near Courmayeur. I went up by helicopter to see for myself — a huge block of ice that was about to break off from the mountain.

As the producer and I were flying over the glacier, I remember thinking about the devastating consequences that the fall of such a huge mass could have had. Experts warned then that it would take just 80 seconds for the equivalent of 100 Olympic swimming pools of frozen water to reach the valley floor.

A member of a special team tasked with monitoring the glacier’s movements told me that the glacier was sliding downwards at an average speed of 35 to 40 centimetres per day.

The glacier collapse was not the only major tragedy to remind us of the climate crisis’ impact.

A widespread desert now exists where water used to flow. The riverbed has emerged, bringing to the surface debris and shells that were normally lying underwater.

An expert told me that this happened in just six months but the phenomenon is not new.

There have been water crises several times over the past 20 years but today’s current drought is the worst that has ever been recorded in the last 70 years.

Together with the cumulative effects of the past, rainfall has decreased by half since the beginning of the year and with less snow than usual, lakes are not at the same level.

Agricultural production has been the first to feel the impact, but also 700,000 people living in the area use the water for domestic use. And the increasing flow of seawater into the Po river makes irrigation almost impossible.

So what is the solution and how could this latest crisis be avoided?

I put the question to the Basin Authority which said reducing water being pumped out for crop irrigation would definitely help.

“We have to accelerate the green transition process. Everyone knows it exists. Next year could be even worse,” the Secretary General of the Authority warned.

But solutions cannot be implemented without political decisions. The authority advised the government on the need to use money from the EU recovery fund to deal with the drought.

A state of emergency was already declared in several regions, but there is so much more that could be done.

The Basin Authority’s secretary-general confirmed there’s a problem when it comes to who’s taking such decisions.

One of Italy’s main problems, something that already emerged during the pandemic, is that often decisions can be taken at different levels both regional and national.

But as the crisis worsens, certainly, something has to be done.