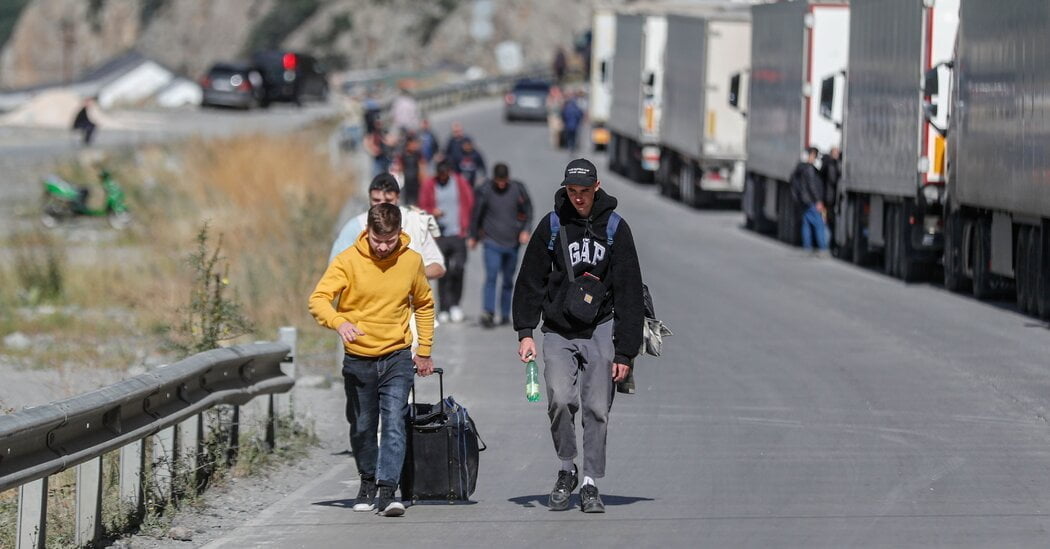 KYIV, Ukraine — The Kremlin has dispatched still more forces to shore up its faltering war effort, but the units are headed not to Ukraine but to Russia’s borders with other countries, where on Tuesday they were confronting young Russian men trying to join an exodus out of the country.

As the avenues for Russians to escape a draft order issued last week narrowed, the Federal Security Service sent armored vehicles to the frontiers, where some men waiting to flee were being served military call-up papers, the state news media reported.

The rush to the borders began within hours of President Vladimir V. Putin’s announcement last week of a military call-up affecting hundreds of thousands of Russians, and the flow has gotten only bigger since then. Though the Kremlin dismissed reports that it may soon forbid nearly all military-age men from leaving the country, many Russians were taking no chances.

On Tuesday, at the borders of Georgia, Kazakhstan and even Mongolia, their numbers continued to swell, at times raising tensions.

In Kazakhstan, responding to calls that the 4,600-mile border with Russia be closed, President Kassym-Jomart Tokayev urged “humanity, patience and organization,” saying the Russians had been “forced to leave because of the current hopeless situation.”

With cars lined up for miles at its border and waits of more than 48 hours, Georgia said it would allow visitors to enter on foot. The number seeking entry almost doubled over the past week, to about 10,000 a day, the country’s interior minister said.

The forces of Russia’s Federal Security Service, the main successor agency to the K.G.B., were deployed at border crossings to ensure that reservists not leave the country “without completing border formalities,” the service said in a statement.

Tensions were also high on Tuesday in Europe, where some officials were pointing fingers at Moscow after suspicious leaks were discovered in two gas pipelines running from Russia to Germany under the Baltic Sea. Amid concerns about possible sabotage, Sweden’s national seismic network said it detected two large undersea explosions on Monday near the locations of the leaks, and three countries were conducting investigations.

With little mystery over the purported outcome of the voting, conducted under armed guard, the only question left hanging at the end of the day was precisely when the Russian government would announce that it was formally annexing the four territories in eastern and southern Ukraine.

Over four days, Ukrainians were alternately cajoled and bullied into casting ballots in referendums stage-managed by the Kremlin. The Russian authorities and their proxies in Ukraine blended raw intimidation tactics — including placing armed men in ski masks at polling stations — with Orwellian messaging and a few stabs at festivities, among them thinly attended concerts on central squares.

“They bang loudly, they ring the doorbell, they give people a ballot and point with their rifles where to put the mark,” Dmytro Orlov, the exiled mayor of the occupied city of Melitopol, said in an interview.

The referendums earned broad international condemnation, and world leaders have vowed not to recognize the supposed results. But that did not stop Moscow from announcing them.

On Tuesday evening, Russian state news media was reporting what it described as results showing enormous levels of support for joining Russia. Tass, the Russian news agency, reported 92.68 percent in favor in Zaporizhzhia, 86 percent in Kherson in the south, and 93.95 percent in Donetsk and 98.53 in Luhansk, both in the east.

Ukrainian and Western officials say that Russia will likely use the referendums to concoct another pretext for war, over seven months after the full-scale invasion began.

In the days ahead, as Ukrainian forces continue their battle to reclaim land seized by Russian forces in the east and south, Moscow is expected to assert that Ukraine is attacking Russia, not the other way around — and that it will defend itself by any means.

On Tuesday, Dmitri Medvedev, the former president of Russia who now serves as deputy chairman of the country’s security council, reiterated on Telegram that Moscow had the right to defend itself with nuclear weapons, and said it was “definitely not a bluff.”

For all the flimsy, sometimes absurd theater of the referendums, the security implications for Europe were deadly serious, and Ukrainians were nervously mulling how far Mr. Putin might go.

“The mood is confident,” Oleksandr Danylyuk, a former secretary of the National Security and Defense Council of Ukraine, said in an interview. “They believe in the Army. But everybody is talking about nuclear. They are worried.”

Formal annexation would require a vote in the Russian Parliament. Mr. Putin is scheduled to address both of its houses on Friday, suggesting that a possible vote on annexation could take place then, Britain’s military intelligence agency reported.

Ukrainians have expressed fear that one immediate consequence of annexation would be conscription into the Russian military, forcing those in occupied territory to take up arms against their own country. In parts of Luhansk and Donetsk, which have been controlled by Russia and its proxies since 2014, that is already the case.

After facing months of heavy casualties, Russia may need all the help it can get to sustain its war efforts.

Western officials estimate that as many as 80,000 Russian soldiers have been killed or wounded in the war, and in recent weeks Russian forces have been pushed out of territory they seized earlier in the fighting.

Faced with the losses, Mr. Putin, after long resisting a large draft, last week ordered a “partial mobilization,” calling up 300,000 people to join the fight. The order was described as applying only to those with military experience, but across Russia — and especially in remote areas and among ethnic minority groups — there were numerous reports of people with no experience being swept up.

While many Russians headed for the borders, others took to the streets despite a Kremlin crackdown on dissent. The chaotic call-up has provoked an upwelling of discontent, with protests in more than 50 cities, according to the independent newspaper Novaya Gazeta. More than 2,300 people have been held under anti-protest laws in the past week, according to OVD-Info, a group that monitors political arrests in Russia.

Still others have attempted sabotage. Military registration and enlistment offices have suffered 21 arson attacks over the same period, the newspaper said. In Siberia on Monday, a recruitment officer was seriously wounded by a gunman who was apparently distraught over the mobilization.

The leaders of some European countries, already struggling to accommodate the historic numbers of refugees fleeing Russia’s war, have debated what approach to take to all the young men now fleeing Russia itself.

Russian citizens have been fleeing to the European Union in droves since the military call-up, the E.U. border agency said Tuesday. From Sept. 19 to Sept. 25, nearly 66,000 Russian citizens entered E.U. countries, up 30 percent from the previous week, the agency said in a statement.

Some Russians may find a welcome from one Central Asian neighbor, Mongolia. A former president of Mongolia, Tsakhiagiin Elbegdorj, has called on Buryats, a Russian ethnic minority, to flee there to avoid mobilization.

“Don’t shoot Ukrainians,” he said in a video address recorded in English. “Don’t shoot your sisters and brothers, children and elders.”

A Complete Guide to Selling Stock Photos, Videos, and Music
6 mins ago
Plants That Bloom in Late Winter or Early Spring
11 mins ago
EU takes China to WTO over Lithuania export ban and...
37 mins ago