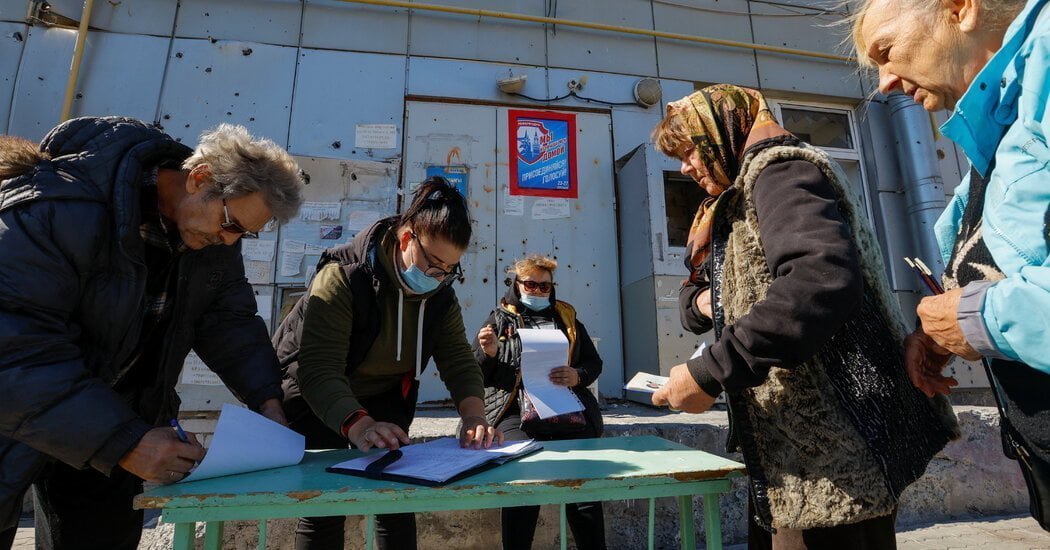 WASHINGTON — President Biden condemned Russia’s claimed annexation of captured Ukrainian territory on Friday, responding to Moscow’s latest escalation with a range of sanctions and a warning to President Vladimir V. Putin that the United States would defend “every single inch” of NATO territory from a potential attack.

“The United States is never going to recognize this, and quite frankly the world is not going to recognize it either,” Mr. Biden said from the White House. “He can’t seize his neighbor’s territory and get away with it. It is as simple as that.”

World leaders rallied around Mr. Biden in a forceful collective denunciation of Russia’s invasion of Ukraine.

President Emmanuel Macron of France said Russia had committed a “serious violation of international law and Ukrainian sovereignty” and vowed on Twitter to help Ukraine “recover its full sovereignty over its entire territory.”

Even among Russia’s traditional allies, no country stepped forward to recognize the annexation. Uzbekistan, a former Soviet republic in Central Asia, issued a statement before Mr. Putin’s speech calling for “respect for sovereignty, territorial integrity and the noninterference in the internal affairs of other states.”

President Volodymyr Zelensky of Ukraine responded to Russia’s claims by announcing that he was fast-tracking his country’s application to NATO. In a video, he accused the Kremlin of trying to “steal something that does not belong to it.”

“Ukraine will not allow that,” he said.

But Mr. Zelensky’s request to join the alliance drew a less resounding response.

“Right now, our view is that the best way for us to support Ukraine is through practical, on-the-ground support in Ukraine,” said Jake Sullivan, Mr. Biden’s national security adviser.

The Biden administration’s new sanctions aim to further cripple Russia’s defense and technology sectors and other industries, and cut off more top officials and their families from global commerce. Those officials include two governors of Russia’s central bank.

But with Russia already under massive Western sanctions, the measures may be less consequential than the administration’s effort to isolate Moscow globally with a fresh appeal to nations that have not chosen a clear side in the conflict.

“I urge all members of the international community to reject Russia’s illegal attempts at annexation and to stand with the people of Ukraine for as long as it takes,” Mr. Biden said in a statement.

Mr. Biden’s warning to Mr. Putin comes amid strong suspicion by U.S. officials that Russia was responsible for apparent sabotage to the Nord Stream natural gas pipelines running between Russia and Germany. The damage occurred near NATO countries in the Baltic Sea but in international waters.

Mr. Sullivan told reporters at the White House that the United States had “elevated our surveillance and monitoring of critical infrastructure in NATO territory.”

U.S. officials have also long worried that Mr. Putin could escalate the war with a conventional military strike against sites in Eastern European countries like Poland and Romania, both NATO allies, that serve as transit points for weapons into Ukraine, or with cyberattacks.

The new round of sanctions fulfills longtime vows by the Biden administration to punish any move by Russia to annex captured Ukrainian territory. But the United States has struggled to expand its coalition of nations aiding Ukraine, and several world powers, notably China and India, have maintained strategic partnerships with Russia and continue to enrich Moscow with energy purchases.

That could change if Mr. Putin decides to make more explicit his threats to use nuclear weapons. Mr. Putin has said Russia will take any measures available to protect its territory, and some analysts have said he might apply that threat against Ukrainian military actions in the areas he has illegally annexed. Mr. Biden has forcefully warned Mr. Putin against using nuclear weapons, and some aides say they hope other world leaders are conveying the same message to Moscow.

After Mr. Putin referred ominously in his address to the use of nuclear weapons, Mr. Sullivan told reporters that “there is a risk, given all of the loose talk and the nuclear saber-rattling by Putin,” that he might consider a nuclear strike. Analysts say that would probably take the form of a relatively small tactical nuclear weapon, either on the battlefield or as a warning shot in an unpopulated area.

Despite Mr. Putin’s latest move, the Biden administration is still holding back from the dramatic step of imposing sanctions on international purchases of Russian energy. U.S. officials are wary of sending energy prices soaring higher, especially just ahead of midterm congressional elections and as Europeans grow frustrated over home energy costs. Officials from the Group of 7 nations have been discussing a price cap on purchases of Russian oil but have not agreed on how to implement one.

The United States and major European nations have announced boycotts of Russian oil and gas. But higher energy prices since Mr. Putin’s invasion have boosted profits for Russian companies and the central government. Besides China and India, other nations have increased their purchases of Russian oil over last year, including Turkey, a NATO member.

U.S. officials say they hope that even if those countries do not formally endorse a price cap on Russian oil, all buyers can use a cap to negotiate much lower prices, which would drain Russia of revenue.

The sanctions announced on Friday added more names to the long lists of Russian officials, companies and institutions that U.S. agencies have penalized in the first weeks of the war.

The Treasury Department said that it was enacting sanctions against 14 Russian executives and firms and international companies, including ones in China, Armenia and Belarus, for supplying the Russian military.

“This action sends a clear message that international suppliers of sanctioned Russian entities and Russia’s defense sector run the risk of being sanctioned,” Secretary of State Antony J. Blinken said in a statement.

The Commerce Department added 57 entities from Russia and the Crimea region of Ukraine, which the Russian military forcibly occupied in 2014, to what it calls the entity list, aimed at severely limiting commercial transactions. U.S. officials said they would try to ensure that business between foreign companies and those on the list is restricted. The Commerce Department now has 392 entities linked to Russia on the list.

Since the winter, the Biden administration has steadily announced travel and economic penalties against many Russian political elites, but it targeted more of them on Friday. The State Department imposed visa restrictions on more than 900 Russian officials. And the Treasury Department is putting nearly 300 members of the Parliament on a sanctions list.

Treasury officials also named several other prominent figures being added to the list: Elvira Sakhipzadovna Nabiullina, the governor of the Central Bank of Russia; Olga Nikolaevna Skorobogatova, the first deputy governor of the bank; Aleksandr Valentinovich Nova, a deputy prime minister; and relatives of members of Russia’s National Security Council. U.S. agencies had already put members of the security council on lists.

Daniel Tannebaum, a former Treasury official and a partner at Oliver Wyman, a management consulting firm, said the penalties announced Friday are unlikely to change Mr. Putin’s calculus. “I don’t think it’s necessarily going to move the needle in terms of tightening the screws on Russia,” he said.

The Biden administration offered a resolution at the United Nations Security Council on Friday condemning the Russian territorial claim. Russia vetoed the measure, and U.S. officials said they planned to bring the measure before the full U.N. next week.

For months, U.S. officials have been analyzing statements from major countries that have remained neutral on the Ukraine war, or are aligned with Moscow, for any signs of daylight between them and Russia.

At the start of a meeting at a summit in Samarkand, Uzbekistan, last month, Mr. Putin acknowledged that President Xi Jinping of China had “questions and concerns” about the war. And U.S. officials say Beijing, the most powerful partner of Moscow, has refrained from giving material aid to Russia for the war.

But the officials also say they do not see a break in that strategic partnership.

“The Chinese are maintaining their line,” said Evan Medeiros, a Georgetown University professor who was senior Asia director on the National Security Council under President Barack Obama. “And the Biden administration knows Beijing won’t carry any water for them on Russia.”

If You’re Looking For the Future of Fashion, They Were All in New York This Week