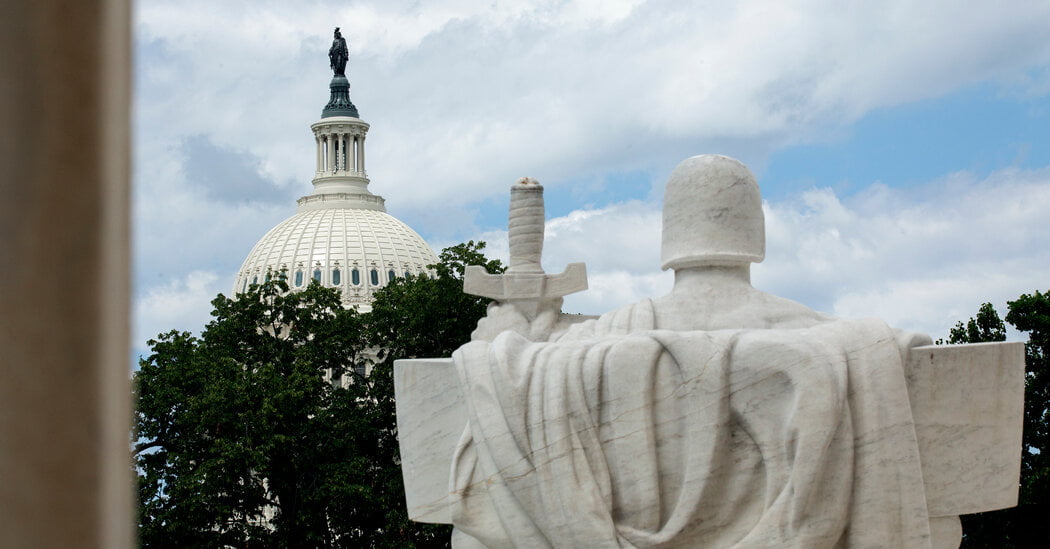 The Supreme Court has lately looked like the most powerful part of the federal government, with the final word on abortion, gun laws, climate policy, voting rights and more.

But the founders did not intend for the court to have such a dominant role. They viewed the judiciary as merely one branch of government. They gave Congress and the president, as well as state governments, various ways to check the court’s power and even undo the effects of rulings.

Two big examples have emerged this summer, following the court’s decision to overturn Roe v. Wade. In Kansas, residents voted overwhelmingly this week to keep abortion rights as part of the state’s constitution. And in Congress, advocates for same-sex marriage are trying to pass a bill to protect it, worried that the court may soon restrict marriage rights as well.

These developments offer a reminder about the limits of the Supreme Court’s power: Political progressives and moderates who are alarmed about the current court — the combination of its aggressiveness and the relative youth of its conservative members — have many options for confronting it.

Some options are fairly radical, like changing the size of the court or passing a law declaring any subject to be off limits from Supreme Court review (both of which, to be fair, have happened in previous centuries). Other options are more straightforward. They involve the basic tools of democratic politics: winning over public opinion and winning elections.

Larry Kramer, a former dean of Stanford Law School, argues that many progressives have made the mistake of paying relatively little attention to this strategy in recent decades. They have instead relied on courts to deliver victories for civil rights and other policies. That tactic worked under the liberal Supreme Court of the 1950s and 1960s and even sometimes under the more conservative court of recent decades. But under the current court, it will no longer work.

The founders did not design the court to be the final arbiter of American politics, anyway. At the state level, progressives still have the ability to protect abortion rights, so long as they can persuade enough voters — as happened in Kansas this week. At the federal level, Congress has more authority to defy court decisions than many people realize.

“If you want a better government, you have to actively get yourself engaged in creating it. And that you do through democratic politics if you want it to be a democracy,” Kramer recently said on Ezra Klein’s podcast. “You try and persuade, and if you do, the country follows you.”

The same-sex marriage bill is so intriguing because it is a rare recent instance of Congress acting as a check and balance on the Supreme Court, just as the founders envisioned and the Constitution allows.

When the court overturns a specific law, Congress can often pass a new law, written differently, that accomplishes many of the same goals. Congress took this approach with civil rights starting in the 1980s, including with the Lilly Ledbetter Fair Pay Act of 2009, which made it easier for workers to sue for pay discrimination. The law was an explicit response to a Supreme Court ruling against Ledbetter.

More recently, however, Congress has been too polarized and gridlocked to respond to court decisions. As a result, the courts have tended to dominate federal policy, by default.

But after the court’s abortion decision in June contained language that seemed as if it might threaten same-sex marriage rights, House Democrats quickly proposed a marriage bill that would defang any future court decision. The court could still issue a ruling allowing states to stop performing same-sex marriages. But the House bill would require one state to recognize another state’s marriage. Two women or men who married in, say, California would still be legally married in South Carolina even if it stopped performing same-sex weddings.

Initially, the House bill seemed as if it might be a political exercise, intended to force Republicans in swing districts to take a tough vote. Instead, the bill passed easily, 267 to 157, with all 220 Democrats and 47 Republicans voting yes.

In the Senate, where 60 votes are needed to overcome a filibuster, the bill’s prospects remain unclear. For now, the bill has the support of all 50 senators aligned with the Democratic Party and four or five Republicans. My colleague Annie Karni says that Democratic leaders plan to hold a vote on the bill in the coming weeks.

No wonder: According to a recent Gallup poll, 71 percent of Americans support same-sex marriage.

Even if it fails to pass the Senate, the bill may prove consequential. It has set a precedent, and a similar bill seems likely to be on the legislative agenda any time Democrats control Congress. The House vote, by itself, also has the potential to influence the Supreme Court by demonstrating that a decision overturning same-sex marriage rights would be out of step with the views of many Republicans.

I recognize that progressives still face obstacles to achieving their goals through Congress. The Senate has a built-in bias toward rural, conservative states. The House suffers from gerrymandering (although this year’s districts don’t actually give Republicans a big advantage). And the Supreme Court has made it easier for states to pass voting restrictions.

Yet political change is rarely easy. Religious conservatives spent decades building a movement to change the country’s abortion laws and endured many disappointments and defeats along the way.

If progressives want to slow climate change, reduce economic and racial inequality, protect L.G.B.T. rights and more, the current Supreme Court has not rendered them powerless. If they can win more elections, the Constitution offers many ways to accomplish their goals.

Refusing to state plainly that gay men are at higher risk for monkeypox is homophobia by neglect, Kai Kupferschmidt argues.

James Webb Space Telescope: Have a look at the Cartwheel galaxy.

A Times classic: The slave who taught Jack Daniel about whiskey.

A superstar debuts: Juan Soto debuted for San Diego last night after being the centerpiece of one of the biggest trades in M.L.B. history. He got on base three times in a blowout win.

More than just an injury: Losing UConn’s Paige Bueckers — the biggest star in college basketball — to an ACL tear impacts the sport at large. She moves the needle unlike any other player in the game.

A backup plan in Cleveland? If the N.F.L. appeal of Watson’s recommended suspension ends up in a full-season ban, could the Browns consider a move for Jimmy Garoppolo? It’s a possibility.

Bring a bathing suit to your next backyard party. “Plunge pools” — deep enough to stand in, not much larger than a hot tub — are growing in popularity, Lia Picard writes in The Times.

Plunge pools tend to be sleek and minimal, making yards “look and feel like a staycation spot,” one landscape designer said. And they are more affordable than in-ground pools, though not cheap: A high-end model costs about $100,000.

A Stranger Filmed Her on the Train. TikTok Users Decided She Had Monkeypox.