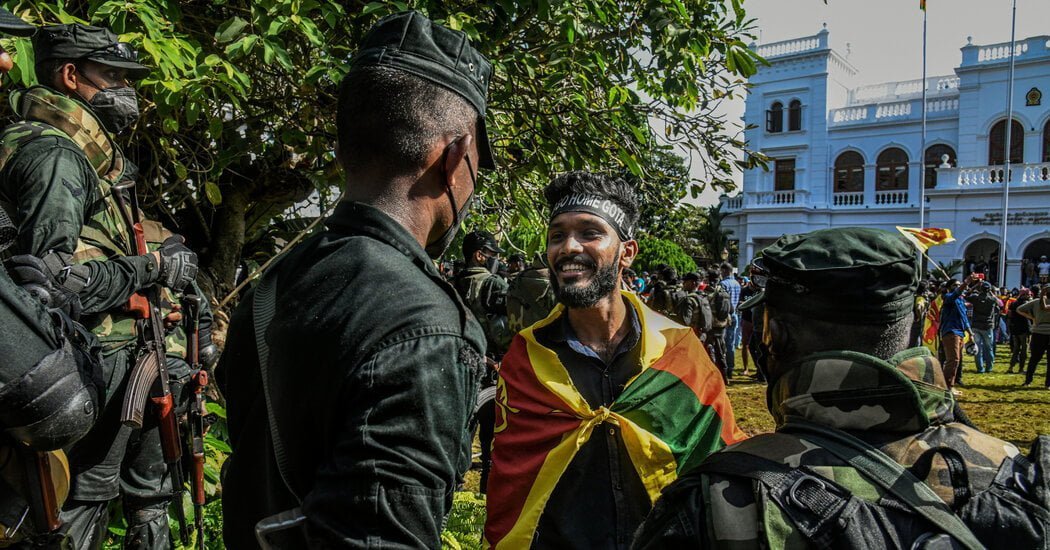 COLOMBO, Sri Lanka — In one corner of Sri Lanka’s capital, the protest movement that forced out the island nation’s powerful political dynasty over the country’s financial ruin continued as it has for months. Speeches and music blared from the main stage, while protesters strategized in tents dotting the scenic seaside.

In another corner, tempers flared. A large number of protesters clashed with security forces overnight, seizing the weapons of at least two soldiers, as they tried to force their way into the Parliament, the focus for what appears to be a protracted political crisis.

Activists on Thursday were struggling to keep things calm and ensure that a mass citizens’ movement does not help tip a country still grappling with the legacy of a decades-long civil war into outright anarchy. Over the three months of protest, they have doggedly protected their reputation as a peaceful movement. But the political elite’s infighting over the vacuum of power left by the fleeing of President Gotabaya Rajapaksa now tests their patience.

In an effort to reduce tensions, protest organizers on Thursday announced that they were pulling out of most government buildings that they had occupied, including the presidential mansion. They have taken care to keep the historic buildings intact, assigning volunteers to clean up after the hordes of visitors, discouraging rowdy youngsters from climbing the mango trees in the garden or damaging the antique furniture.

“We are moving out of the occupied buildings because we want to preserve these places, and we don’t want people to vandalize these places, nor do we want the state or other actors using vandalism as a reason to vilify us and the movement,” said Buwanaka Perera, an organizer of the protest camp that has operated for more than three months in an oceanside park.

“So it’s better to hand it over to the state,” Mr. Perera said. “The state of Sri Lanka, not the president, not the prime minister, but the state.”

President Rajapaksa, who fled on a military plane to the Maldives in the early hours on Wednesday, refused an orderly transition of power in the face of mounting protests, handing over the reins to the deeply unpopular Prime Minister Ranil Wickremesinghe. Succession plans have been complicated by the fact that Mr. Rajapaksa still has not sent his promised resignation, which would end his time in office.

Protesters blame the Rajapaksa dynasty for the mismanagement of the country’s economy, which is essentially out of money and running low on fuel, food and essential medicine.

Understand What Is Happening in Sri Lanka

A president ousted. Sri Lanka plunged into a deep crisis when protestors, pushing for the resignation of President Gotabaya Rajapaksa, stormed his residence, pushing him to flee the country. Here is what to know:

Economic issues. Sri Lanka was once held up as an economic success story, with one of the highest median incomes in South Asia. But the country is now essentially out of money, and many people are living on the edge, a result of poor political decisions, reckless spending and economic mismanagement.

A new prime minister. As protests intensified, Mr. Rajapaksa began emptying his cabinet of family members. In May, his elder brother was forced out as prime minister and replaced by Ranil Wickremesinghe, who began discussions with the International Monetary Fund on the terms of an economic bailout.

The tipping point. On July 9, increasingly frustrated protesters took over the president’s residence in Colombo, while Mr. Rajapaksa went into hiding. The speaker of Parliament later said that the president and the prime minister had agreed to resign.

An acting president is appointed. On July 13, Mr. Rajapaksa fled the country. With the leadership of the nation uncertain, protesters surrounded the prime minister’s residence in Colombo, where they were met with tear gas. The prime minister, Mr. Wickremesinghe, was named acting president. He declared a state of emergency and vowed to retake government buildings overrun by protesters.

Protests followed Mr. Rajapaksa to the Maldives as well. In the capital, Malé, around 100 Sri Lankan migrant workers gathered, carrying signs and placards urging officials not to protect him. “Dear Maldivian friends, please urge your government not to safeguard criminals,” read one banner. “Throw him out of here,” read another.

Officials in the Maldives confirmed that Mr. Rajapaksa had departed around noon on a Saudi airline flight to Singapore, a regular commercial flight between the two countries that transits through the Maldives. They could not say whether Mr. Rajapaksa’s final destination was Singapore or Saudi Arabia.

Singapore’s foreign ministry confirmed that Mr. Rajapaksa had been allowed entry into Singapore on a private visit. It said he had neither been granted nor had asked for asylum, and that this is a request that Singapore seldom grants.

Either destination — one the location of Islam’s holiest site, and the other an economic powerhouse — proves uncomfortable for Mr. Rajapaksa, social media users were quick to point out. He was accused of Islamophobic policies during his time in office, while he fell far short of turning Sri Lanka into another Singapore, a goal he had mentioned in speeches.

In Mr. Rajapaksa’s absence, the prime minister, Ranil Wickremesinghe, has stepped into the role of acting president. But protesters have long demanded his resignation as well, and he is a deeply divisive figure in the Parliament, where he lacks support. A successor to complete the remaining two years of Mr. Rajapaksa’s term must go through a parliamentary vote.

Upon taking charge, Mr. Wickremesinge, whose private residence was set ablaze, ordered a state of emergency to rid the country of what he called “a fascist threat.” He also asked the security forces to restore law and order.

The defense ministry said in a statement Thursday that the two Army soldiers whose weapons were stolen outside Parliament were “brutally attacked” with iron rods and poles, and that the armed forces would work together to “ensure national security.”

If this account is accurate, the attack would reflect a sharp departure from the peaceful roots of the movement against the Rajapaksa family and its allies, which began with small candlelit vigils and culminated in a takeover of the country’s highest offices. It has drawn support from a wide strata of society: students and trade unionists, Catholic nuns and Buddhist monks, farmers and middle-class professionals. It lacks clear leaders; a group of activists are, at best, trying to coordinate its movements and consolidate its disparate goals.

At the protest camp, the mood was somewhat deflated. The crowds had thinned, and the protest chants had changed from denouncing Mr. Gotabaya to calling for Mr. Wickremesinghe to go.

As a grass-roots citizens’ movement, there are many stakeholders with different aims, some of whom are ready for a compromised solution brokered through Parliament, and others who want to change the Constitution first.

Some admitted that a largely leaderless effort also made the work of containing protests hard in moments of tension — particularly after the promised resignation from Mr. Rajapaksa failed to materialize.

“We have no control over the people’s anger, especially after they have been mocked in this way,” said Namal Jayaweera, a retired human resources professional, who joined the movement over 13-hour power cuts and a policy of restricting citizens’ access to foreign currency that left him unable to pay for his son’s college tuition in Canada.

While the takeover of the presidential residence and office this weekend was largely peaceful, with protesters cleaning trash and tidying the halls, the subsequent occupations have been more frenetic.

Protesters staged a forceful takeover of Mr. Wickremesinghe’s offices on Wednesday, pushing through files of security forces who fired constant tear gas, in addition to the earlier arson at his private residence. It was followed by the overnight clashes at the Parliament, actions that risked a more forceful response from the police and the loss of a seat at the table as political leaders discuss the next steps.

The day after the clashes outside the Parliament building, the place was barren except for a handful of soldiers putting up reinforced steel barricades. At the presidential mansion and the prime minister’s official residence, known as Temple Trees, protesters showed a final trickle of sightseers in as they prepared to vacate the buildings.

Organizers of the protest movement said they would continue to hold the old Parliament building, which had more recently served as the offices of the president, and the scenic Galle Face, their campsite for the past 100 days, to continue to exert pressure.

“People have gathered in the old Parliament to send a very clear message to not only the executive but also the legislature — that we want you to do your job,” Swasthika Arulingam, one of the protest organizers, said in a statement on behalf of the movement. “We will continue to protest until we reach the goals of our struggle.”

Ms. Arulingam was scathing in her criticism of political leaders bickering over how to fill the vacuum left by Mr. Rajapaksa instead of moving to address the people’s key demands: most immediately, an uninterrupted supply of essential items, such as fuel and food, and then reforming the political system to provide better checks and balances.

“For the last three days, these politicians have acted as if this country is their private property,” she said. “They have put our country at risk; they have put our national security at risk.”