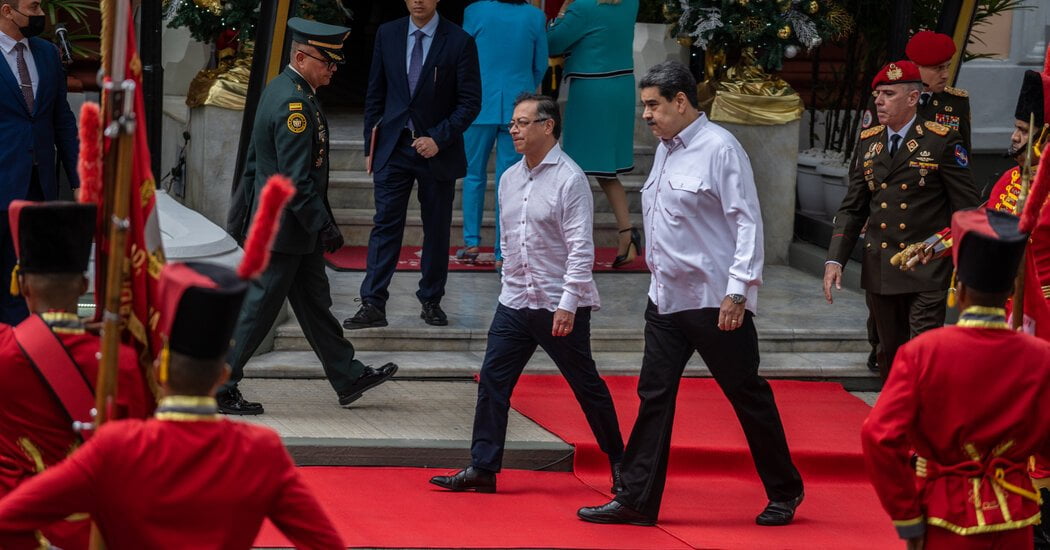 CARACAS, Venezuela — It was a meeting that just a year ago would have been nearly unthinkable.

But on Tuesday, the president of Colombia, a nation that for years has been the strongest ally of the United States in Latin America, flew to Caracas to meet with the leader of Venezuela, a man whom the United States does not recognize as his country’s president and who is accused by the United Nations of crimes against humanity.

The meeting between Gustavo Petro, Colombia’s newly elected leftist president, and Nicolás Maduro, a socialist-inspired leader who has eviscerated his country’s democratic institutions and helped drive much of the nation into poverty, marks a new chapter in the global approach to Venezuela.

For years, a coalition led by the United States has sought to push Mr. Maduro out through sanctions and isolation. But a growing number of nations, particularly new leftist governments in South America, have begun to soften their approach to Mr. Maduro.

And Colombia, which shares a border with Venezuela more than 1,300 miles long, is among the largest and most important to opt for engagement, both because of its physical proximity to Venezuela — and thus its ability to engage in cross-border trade — and its close relationship to the United States.

The question hanging over this new engagement, though, is significant.

Will Mr. Petro’s overture to Mr. Maduro enable the authoritarian leader, giving him a dose of the international legitimacy he craves and helping him solidify his grip on power?

Or will Mr. Petro be able to push a fellow leftist toward democratic norms, including what the Venezuelan opposition has been demanding: a free and fair presidential election in 2024?

The visit “is a prize for Mr. Maduro,” said Phil Gunson, an analyst with the International Crisis Group who has lived in Venezuela for more than two decades. “My fear is that Maduro will get more out of this than Petro will.”

In a speech just before taking off for Caracas, Mr. Petro said his intention was to discuss border relations, migration and deforestation in the Amazon rain forest with Mr. Maduro, and to push him to return to the Inter-American Human Rights system.

A decision to re-enter that system would allow victims who have not received justice in Venezuelan courts to seek recourse in an international court. But many analysts believe that Mr. Maduro has little incentive to join.

“Six years of political vacuum in the relationship between two neighbors,” Mr. Petro said. “There is a lot to talk about.”

In response, a spokesperson for the U.S. State Department said that Washington urged Colombia “to hold accountable governments that have discarded democratic norms, such as Maduro’s authoritarian regime.” But the Biden administration did not explicitly criticize or praise the move.

Over time, corruption and mismanagement destroyed the economy, triggering a humanitarian crisis. To maintain their grip on power, Mr. Chávez and Mr. Maduro cracked down on the media and threw opposition figures into prison.

The U.S. accused Mr. Maduro of rigging the 2018 presidential election, and in 2019 broke off diplomatic relations with the Venezuelan government. Just a few weeks later, it recognized an opposition figure, Juan Guaidó, as the country’s legitimate president, a move that was followed by dozens of nations.

Since then, the U.S.-led strategy has been to try to move Mr. Maduro toward a new election through punishing economic sanctions.

But that policy has yet to sway Mr. Maduro, who last year broke off talks with the country’s opposition leaders that were supposed to include a discussion about laying out conditions for a new presidential vote.

And in recent months, many nations have opted to start engaging with the Maduro administration, a reflection, in part, of the election of leftists across South America. Following Sunday’s election of Luiz Inácio Lula da Silva in Brazil, all six of the largest countries in Latin America are or will soon be led by leaders who profess leftist ideals.

Bolivia resumed normal relations with Venezuela after the election of Luis Arce in 2020. Peru did the same last year following the election of Pedro Castillo. Earlier this year, President Alberto Fernández of Argentina said he would do something similar.

On Monday, Mr. Maduro stated that he and Mr. Lula had spoken on the phone and agreed to resume binational cooperation.

President Gabriel Boric of Chile has perhaps been the most critical of Mr. Maduro. His center-right predecessor recognized Mr. Guaidó as the president of Venezuela. But there has been no mention of Mr. Guaidó on the foreign relations ministry’s website since, nor has there been official recognition of Mr. Maduro’s government.

In September, at an event at Columbia University, Mr. Boric said that leftists cannot be afraid to condemn bad actors in their midst.

“We cannot have double standards,” he said.

Colombia, which had only had centrist and right-wing governments until recently, has had a tense relationship with Venezuela since Mr. Chávez came to power.

But the relationship took a nosedive in 2019 when Colombia recognized Mr. Guaidó as the Venezuelan leader and Mr. Maduro broke off relations with Bogotá.

Mr. Guaidó, who is still recognized by the United States as the president of Venezuela, wrote on Twitter that Mr. Maduro was a “dictator” and that the visit from Mr. Petro “could dangerously normalize human rights violations.”

But in an interview, Stalin González, part of another faction of the opposition, said that the international community had exhausted the strategy of isolation.

Only dialogue remained, he said, and the Venezuelan opposition should embrace attempts by the new left in South America to bring Mr. Maduro to the negotiating table.

“I hope that Petro will be an ally of democracy in Venezuela,” Mr. González said. “In the past, the strategy of pressure and more pressure was used and that did not work. We need people who encourage Maduro to democracy, to respect human rights and institutions again.”

Mr. Petro has described his decision to reinstate relations as a practical one.

There are more than two million Venezuelans living in Colombia, yet no consular services to aid them, while the rupture has ended billions of dollars in legal trade, feeding illegal, untaxed trade along the many dirt paths that line the countries’ extensive border.

Yet there are signs that Mr. Petro’s interests may fall closer to home. The Colombian president has bet his presidency on achieving what he calls “total peace,” which involves eliminating the country’s many armed groups through peace deals and other means.

But to accomplish this, Mr. Petro needs Mr. Maduro, who has allowed some of those groups, including a leftist guerrilla group called the National Liberation Army, to flourish in Venezuela.

Mr. Gunson said that Mr. Maduro has a long history of negotiating in bad faith, and cast doubt on the idea that he would follow through on anything that he promised Mr. Petro.

So far, it’s not clear if Mr. Maduro has promised Mr. Petro anything in exchange for the highly public meeting.

Benigno Alarcón, the director of the Center for Political Studies at Venezuela’s Andrés Bello Catholic University, was similarly skeptical that Mr. Petro would be able to push Mr. Maduro toward democracy.

“If this relationship has political components, as I would bet it will,” he said, his guess was that it would “somehow end up favoring the stability of the Maduro government.” 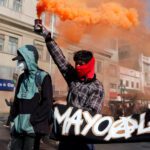 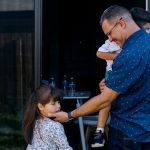 For Venezuelan Migrants in South Florida, ‘Vision of a Certain Life’ Meets Reality 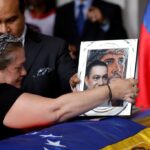 How to Fix Outlook Search When It’s Not Working

Over 40K in dark after gunfire directed at North Carolina...
8 mins ago
Bob McGrath, an original ‘Sesame Street’ cast member, dies at...
1 hour ago
How to Recover Lost Save Files on Pokémon Scarlet and...
2 hours ago