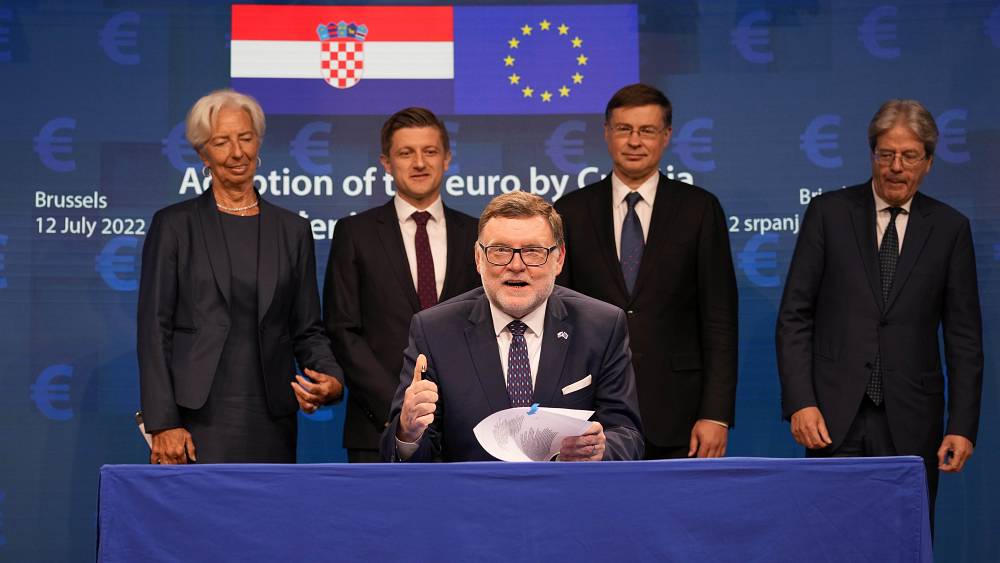 This week, it was officially confirmed that Croatia will introduce the euro on January 1, 2023, after the EU institutions removed the final legal obstacles for it to adopt the common currency.

The Adriatic country fulfils the necessary requirements on issues including inflation and public debt.

Adopting the euro offers economic benefits stemming from deeper financial ties with the currency bloc’s other members and from the European Central Bank (ECB).

The Frankfurt-based monetary authority praised Croatia’s euro membership as a sign of strength for the entire euro area.

“Congratulations. This is a time for celebration,” ECB President Christine Lagarde said on Tuesday.

“This is the 20th member of the euro area joining on the 20th anniversary of the creation of the euro coins and the euro banknotes. It’s also an act of inclusion. Moving from being 19 to being 20 is not just symbolic in numbers, but it’s also a sign that together we are stronger.”

But Croatia’s move to the core of the European Union happens at a complicated moment economically.

The growth picture is bleak, inflation keeps rising, as new figures showed this week, and the war in Ukraine has created political and economic insecurity in Europe not seen in decades.

And fears Moscow will cut off gas to Europe have pushed the euro down to parity with the dollar, which will drive up the relative price of oil which is trading in dollars, further pushing up inflation.

The European Commissioner for Economy, Paolo Gentiloni, warned that things could get worse too.

“What could change the situation we are in and bring us into a more difficult economic situation are supply cuts and real shortages of supply,” Gentiloni said.

“This could change a picture that, for the time being, is a picture of very limited, reduced and slowed down growth. We are not in negative territory at the moment.”

For William De Vijlder, chief economist at BNP Paribas, Europe is already in a state of stagflation, where inflation is high and growth remains slow.

“In the short run, it will feel like stagflation because we have still elevated inflation. That will take a lot of time to decline, whereas in the meantime, the growth environment has become extremely soft. I would call this stagflation light.”

The commitment, made at the Ukraine Accountability conference in the Hague came as a residential area in the centre of Ukraine was hit on Thursday with heavy shelling killing 20 people including a baby in a stroller.

The court’s Chief Prosecutor Karim Khan said the international justice system must be put into action.

“As we speak children, women, and the young and the old are living in terror. Grieving about what they lost yesterday, holding their breath about what they could lose today, or what tomorrow can bring,” Khan said on Thursday.

“At a time like this the law cannot be a spectator; the law cannot recline in comfort in The Hague or anywhere else for that matter when it’s meant to protect or uphold certain principles that are essential for humanity.”

Khan added that there is a “need of an overarching strategy” as different countries and courts look to investigate and prosecute war crimes in Ukraine.

Hungary was back in the spotlight this week too.

The European Commission referred it to the EU’s Court of Justice over two cases concerning freedom of speech that, after more than one year, remain unresolved.

It marks a new chapter in the standoff between Brussels and Budapest over fundamental democratic values.

The first case relates to the highly controversial Children Protection Act, a law whose stated purpose is to safeguard children’s well-being and fight paedophilia.

Brussels argued the law violates a series of EU law principles, including human dignity, freedom of expression and information, the right to private life and the right to data protection, as well as single market rules on audio-visual services and e-commerce.

Budapest said the act did not discriminate against any particular community and was exclusively focused on the protection of children.

The second case relates to Klubrádió, an independent, liberal-leaning radio station whose news and discussions were often critical of the government. It was considered one of the few remaining opposition media outlets in the country.

Klubrádió was forced off the airwaves after the national authorities refused to extend its broadcasting licence “on highly questionable grounds” and now operates online.

The Commission considered the licence refusal had been “disproportionate” and “non-transparent,” and opened legal action in June 2021.

“Through its conduct, Hungary has also violated the freedom of speech as enshrined in the Charter of Fundamental Rights of the EU,” the executive said.

VIRAL BEAUTY HACKS YOU SHOULD TRY