Home » Excitement, Then Ambivalence, For the Pope’s Visit to Quebec
News

Excitement, Then Ambivalence, For the Pope’s Visit to Quebec 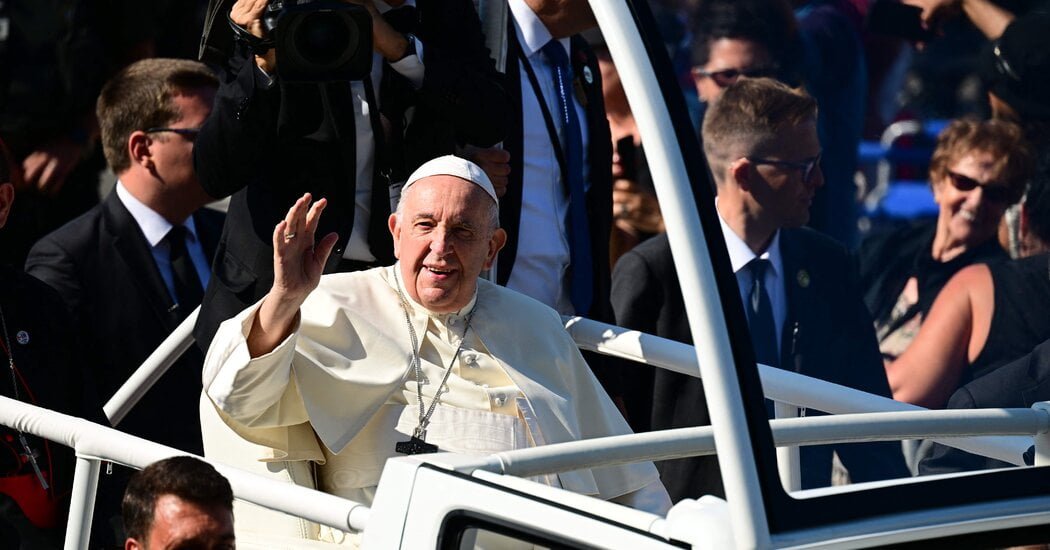 QUEBEC CITY — The smell of cigarette smoke, fruity vape juice and sunscreen might have been a flashback for visitors returning to the sprawling Quebec City park where, two weeks ago, an annual summer music festival drew boisterous crowds.

But on Wednesday, the bracing smell of sage, a sacred ingredient used in Indigenous spiritual ceremonies, cut through the air in the Plains of Abraham park and the mood was more restrained as thousands of spectators awaited the arrival of Pope Francis.

Volunteers in blue T-shirts waded through the crowd, handing out water bottles under an uncomfortably hot sun as visitors craned their necks whenever a vehicle passed by, hoping it was the pope. Some people lay on blankets, eating sandwiches and entertaining their babies.

The papal visit to Canada this week was a major milestone in the history of the scandal involving the country’s church-run residential schools, where Indigenous children were sexually and physically abused, or died, for over a century.

The pontiff, responding to longtime pleas for an apology to Indigenous people, came to Canada to beg forgiveness for the “evil committed by so many Christians” at the schools.

The wounds inflicted by the priests, nuns and other staff in the government-sanctioned system was called a “cultural genocide” by Canada’s Truth and Reconciliation Commission, and its effects linger.

“My spirit was broken. I was taken away from my parents,” said Delbert Sampson, a member of Tk’emlúps te Secwépemc First Nation who spoke to me at the Plains.

When he was 8, he said he was forced to attend Kamloops Indian Residential School in British Columbia, the site of a grisly discovery by his community, which said it had found evidence of 215 unmarked graves using ground-penetrating radar.

“I had a really hard time there and I had a lot of healing to do after that,” said Mr. Sampson, who is now in his early 70s. Pope Francis’s apology was a start, he said, but, “There’s a lot more to it.”

Pope Francis arrived in Canada on Sunday to kick off a six-day visit, starting in Alberta. The Times’s bureau chief in Rome, Jason Horowitz, traveled with the Pope to Maskwacis, Alberta, where the pontiff visited a cemetery and delivered his apology to Indigenous people. Chief Wilton Littlechild of the Ermineskin Cree Nation, who had welcomed the pope, then fitted him with a headdress.

The speeches were broadcast on jumbo screens at the Plains of Abraham, following a few hours of live Christian music and Indigenous cultural performances, and a ceremony to welcome a delegation of Indigenous people who had walked 170 miles as part of a healing march.

After the formal addresses, the crowd turned its attention to a road across the park, which was lined with steel barriers and dozens of police officers to keep the path clear for Francis’s ride in the popemobile. Onlookers erupted in applause when Francis rolled by, with dozens of cellphones hoisted in the air to capture the moment, and some people handing off babies to the pontiff’s aides to be kissed on the head by Francis.

As we awaited the pope, I spoke to Nathalie Rochon, who has learned about residential schools in the last two years that she has lived in Quebec City, where she moved from Bordeaux, France. Ms. Rochon said she hoped that Indigenous people would feel a measure of satisfaction “now that the pope took a first step to give them the apology they deserve.”

While the Catholic Church in Canada has retained a relatively stable number of adherents, that is not the case in Quebec, where secularism has taken hold more than in any other province, my colleague Ian Austen wrote while covering the papal visit in Edmonton, Alberta.

That may have contributed to the somewhat sparse crowd on Thursday morning at the Plains of Abraham, where people gathered to pray, receive communion and watch a broadcast of Pope Francis’s mass at the national shrine of Ste. Anne de Beaupré, a short drive northeast of Quebec City.

The small audience at the Plains — a stark contrast to Wednesday’s crowd — was a disappointing sight for Suzanne Crête, a practicing Catholic who believes the church should return Indigenous artifacts and openly share its records about residential schools.

She was touched by the pope’s emphasis on respect for older people and grandparents in his remarks. Older people are revered in Indigenous communities, and residential-school children were stripped of the opportunity to receive cultural teachings from them. “I am a grandmother, and I find that very sad because those children would have never known their grandmothers,” Ms. Crête said.

We spoke as the mass went on, and she gestured to a sign with the official slogan of the papal visit: “Walking Together.”

Vjosa Isai is a news assistant for The New York Times in Canada. Follow her on Twitter at @lavjosa.

How are we doing?
We’re eager to hear your thoughts about this newsletter and events in Canada in general. Please send them to nytcanada@nytimes.com.

Augustinus Bader | What You Need To Know About The Luxury Skincare Brand
August 9, 2022
The 24 Most-Loved Back to College Essentials from Amazon
August 9, 2022
Issey Miyake, Japanese Fashion Designer, Dies at 84
August 9, 2022