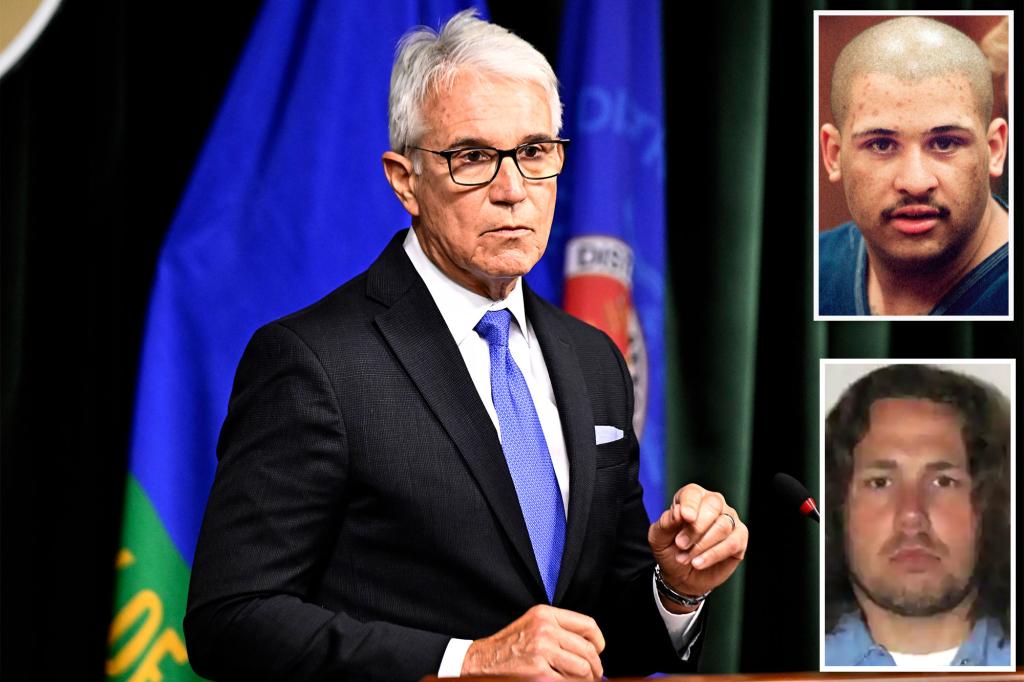 The daughter of a construction manager who was brutally murdered three decades ago said her family was “tricked” by the Los Angeles County District Attorney’s Office, which is pushing to commute the killer’s death sentence to life without the possibility of parole — despite their opposition.

Other families said they are also feeling “unheard” and manipulated by embattled LA County District Attorney George Gascón, who is a fierce opponent of the death penalty.

“When you take someone’s life, there has to be consequences … and there have been massive consequences for my family that is permanent,” said Heather Scott, who was only 12 years old when her father, Fred, was slain.

Scott, 43, said she was blindsided when DA officials told her they filed a motion to resentence Scott Forrest Collins, the man who killed her father “execution-style” in 1992, but assured her and her family  that “it would be the same thing” since California has a moratorium on death row cases.

The Golden State has not had an execution since 2006, and Gov. Gavin Newsom placed a moratorium on executions three years ago when he took office. But prosecutors who support maintaining capital punishment said the moratorium could end if and when Newsom were to leave office.

Earlier this year, Newsom went even further and moved to dismantle the country’s largest death row, San Quentin State Prison, within two years and transfer condemned prisoners to other facilities where they could be housed with other inmates where it is deemed safe.

The LA DA’s Office, meanwhile, has so far said it is reviewing just two cases where the defendants are seeking death row appeals — but sources told The Post that Gascón could file motions to resentence at least 65 post-conviction death penalty cases.

Grieving families said Gascón’s “resentencing crusade” only further victimizes them because the office that once supported their wishes has turned its back on them.

“I was in total shock but then I began to realize that maybe we have been lied to because it’s not true when they told us that nothing would change,” Scott told The Post.

“I asked why they would do this because that sounds like something (Collins’) defense attorney would do, not the DA,” she added. “The response I got was, ‘He would never would’ve been executed in the first place,’ but that’s not true. They can’t guarantee that he will never get out of prison, and that’s our biggest fear.”

Collins, 52, was convicted and sentenced to death in 1996 for kidnapping and robbing 42-year old Fred Rose at gunpoint of $200 after he left his work in Lancaster, Calif.

Rose, a father of three, was found on Jan. 23, 1992, by a runner who spotted his body next to railroad tracks in North Hollywood with a gunshot wound to his head.

In a February court filing, Deputy DA Shelan Joseph wrote that Collins is a “model prisoner” who was only 21 years old at the time of the offense. She added that Collins “experienced hardship as a child,” including the death of his father, and that he had multiple learning disabilities that were “never adequately treated in school.”

Collins was transferred out of death row and into a voluntary program at a correctional facility in Tehachapi, Calif., for inmates who have shown good behavior, Joseph wrote in the motion.

Scott said her family were only notified by the DA’s Office about the resentencing motion as a formality. However, documents signed by Joseph on February 15 — and obtained by The Post — say prosecutors wanted to proceed with Collins’ resentencing without a hearing, leaving Scott and her family with no opportunity to object in person.

That’s when Scott reached out to former Deputy DA Kathy Cady, who agreed to represent the family, along with former LA DA Steve Cooley. With their attorneys, the family filed an opposition to resentence Collins without a hearing.

“Frankly, it’s absolutely scandalous,” Cady said. “(Joseph) has gone in what appears to be a systematic way to try to undo every death sentence based on (Gascón’s) policy. Policy does not mean that the law has changed when there is no legal mechanism to do what you want to do. That’s not how the law works.”

In an order filed March 10 asking for further briefing, LA Superior Court Judge William C. Ryan said, “Although the statute does permit such resentencing, in the court’s view, that appears to run contrary to the rights that victims and their family have in addressing the court and giving a victim impact statement.”

Scott, along with her husband and her mother, Sharon, appeared in court on June 22 and provided their statement to the judge. Sharon Rose asked the judge to take into consideration her wishes and deny Gascón’s motion.

“Anything short of denying the motion to resentence would be to victimize my family again,” she wrote in her statement. “In the end, a jury and a judge handed down the correct verdict and chose a sentence, which is still to this day a legal sentence in California. The voicemail I received promised ‘nothing will change.’ What the current DA is doing changes everything. It changes our entire judicial system and the faith we can place in verdicts and sentences today.”

LA County DA officials told The Post on Friday that they continue to reach out to victims and their families.

“We have made every effort to reach out to the victim’s next of kin in these cases,” said Greg Risling, spokesperson for the DA’s Office. “We center the needs of the victim and have a licensed social worker available to support them if they wish to consult with her. While we understand that some victims may not wish for the defendant to be resentenced, we must evaluate each case individually and on the merits of the legal issues presented.”

Gascón, however, faced more criticism after he announced about two weeks ago that he was scrapping the critical “Lifer Unit” and reassigned prosecutors who alerted victims of their assailants’ parole hearings.

Jane Bouffard, whose elderly father and mother, Elmer and Gladys Benson, were slain in their home in South Gate, Calif., in 1996, said she and many other families feel the DA’s Office has turned its back on them.

Bouffard also got a call from the DA’s Office to inform her that Gascón has filed a motion to resentence her parents’ killer, Samuel Zamudio.

Her dad, Elmer Benson, 79, was found lying on the living room floor next to his wheelchair on Feb. 11, 1996, having been stabbed multiple times. Mom Gladys, 74, was found on the kitchen floor, also with multiple stab wounds, police said.

During the trial, prosecutors said Zamudio was the couple’s neighbor and had borrowed money from the Bensons.

In their motion, the DA’s Office said proceeding with Zamudio’s death sentence would be unconstitutional because of his intellectual disabilities. The judge, however, did not accept the DA’s disability claim and set an evidentiary hearing in the case for August.

During that hearing, the judge will hear testimony from a court-appointed expert who has been hired to observe Zamudio. Meanwhile, Bouffard said prosecutors have repeatedly blocked her attempts to obtain pertinent records regarding Zamudio.

“The opinion that he had a disability was never mentioned in the trial as far as I know, but now they are also saying we can’t read any of his records that proves this,” Bouffard told The Post.

“What really bothers me is that in these proceedings, there is no consideration given to my parents whatsoever … about who they were and anything they did in their lives,” she added. “They are never mentioned. It’s all about getting him (Zamudio) off death row and back into the general population.”

Last week, Gascón also filed a motion to reverse the 1996 sentence of Raymond Oscar Butler, who has been housed at San Quentin State Prison’s death row since he was found guilty of murdering two Marymount College students, Takuma Ito and Go Matsuura.

Ito and Matsuura, both aspiring filmmakers from Japan, decided to stop at a Ralph’s supermarket on March 25, 1995, when Butler approached their vehicle and shot them.

Butler took off with the car and was arrested a few days later. The brutal shooting was a subject of a documentary called “Lives Interrupted.”

In a 264-page resentencing recommendation filed on July 11, Joseph argued Butler was only 18 at the time he committed the murders and that he had suffered brain damage as a child. She added that Butler, now 47, had “significant” cognitive impairment at the time he committed the crime and that he had an “incredibly chaotic” life filled with family dysfunction.

The DA’s Office would not say whether prosecutors have reached out to Ito and Matsuura’s families, but told the Daily Breeze that they are “not seeking Butler’s release from prison.”

“District Attorney Gascón remains committed to ending the death penalty in Los Angeles because it is racist in its application, morally untenable, irreversible, expensive and it has never been shown to deter crime,” Risling said.

Cooley, who was the LA County DA from 2000 to 2012, said Gascón, who defeated incumbent DA Jackie Lacey in November 2019, is using his own policies to “manipulate” families who continue to suffer.

“They are lying to the victims’ next of kin and they are making a conscientious effort to deceive the courts,” Cooley said. “Joseph, who worked for the Public Defender’s Office before working for Gascón, is 100 percent committed to undoing the death penalty verdicts achieved over the years by many predecessors of the DA’s Office. It’s a scheme and a scam.”

Scott said Gascón’s policies provide no comfort that her father’s killer will remain in prison.

“Not only did my dad lose his life, but we grew up without him. And even to hear things like, ‘Oh, (Collins) had ADHD or he grew up without a father,’” she told The Post. “Well, I have been diagnosed with post-traumatic stress disorder because of the violent way that he was killed. I grew also up without a dad.

“I don’t think that’s an excuse to have a sentence reduced when you take someone else’s life.”