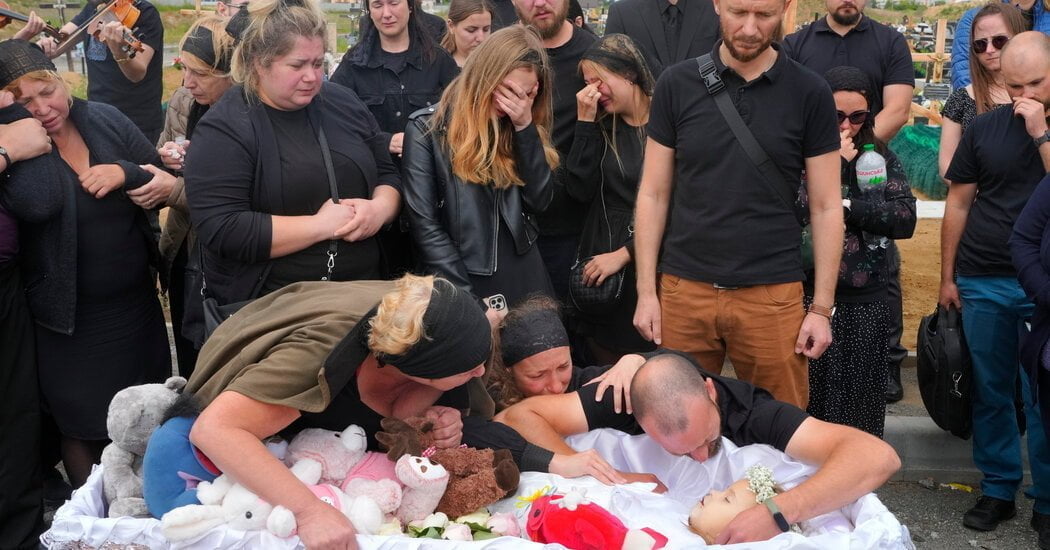 The family and friends of Liza Dmytriyeva brushed away tears on Sunday as four men carried her coffin into the cathedral, where a photo of the smiling girl was nestled between roses and teddy bears three days after she was killed by a Russian cruise missile strike.

The death of Liza, a 4-year-old with Down syndrome whose family nicknamed her Sunny Flower, encapsulated the brutality of Russia’s invasion of Ukraine.

She had been on a walk with her mother, pushing her own baby carriage through a park on Thursday when a flash of fire and metallic shrapnel erupted near them in Vinnytsia, a central Ukrainian town far from the front lines where some sense of normalcy had still seemed possible.

On Sunday, the family of Liza, who had just learned her first words and took pride in organizing toys, looked on as the coffin made its way into the cathedral, according to video from The Associated Press.

As the priest, Vitalii Holoskevych, began to speak, he held a cross in one hand and wiped tears from his cheek with the other.

“Elizaveta,” he began, “stands and looks near God.” His voice broke as he looked toward the coffin holding the body of the girl whose portrait showed her in pigtails long enough to touch her fuzzy purple coat.

Photos of Liza’s body, slumped beside the overturned carriage and her mother’s severed foot, have swirled around the world since they were shared online by Ukraine’s State Emergency Service. The visceral nature of the images punched through the too-familiar stream of daily violence directed against civilians by the Russian military.

On Sunday, the men carrying Liza’s coffin to the cemetery wore pink armbands, as her father, Artem Dmitriev, staggered behind them, his eyes closed as two men held him up by the shoulders.

By her grave, dozens gathered around the open coffin, where Liza’s plush toys lay in her lap: a white bunny, a gray bear, a crisscrossed moose. Mr. Dmitriev knelt, and cried.

As a string band played music, Liza’s grandmother, Larysa Dmytryshyna, cried out to her granddaughter: The song, she said, was playing “for you to hear it.”

Then the workers closed the coffin and lowered it into the grave.

Liza’s family cupped dirt in their hands and scattered the earth over her. 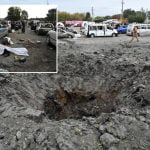