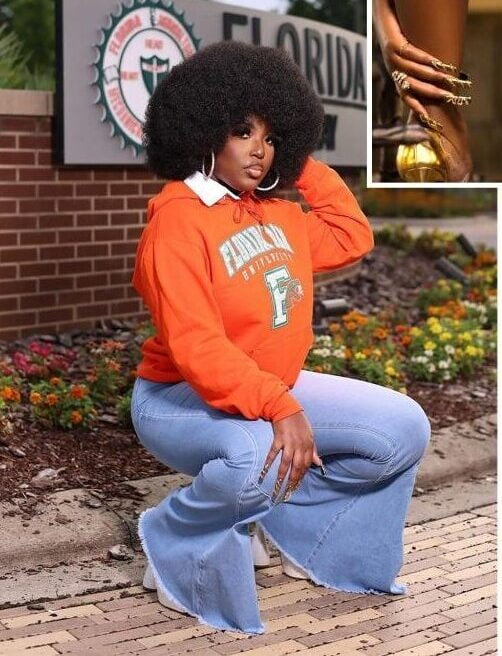 She tossed her cap — and her gown, too.

A student who recently earned her Master’s in Counselor Education from Florida A&M University (FAMU) is receiving backlash after posing fully nude on the Tallahassee campus for graduation photos, according to a report.

“If you want FAMU to withhold my degree, then you’re the real snakes,” Terica Williams wrote on social media.

“As I’m standing here with my Masters Degree at the tender age of 24, I am the living proof that clothes do not define you.” she wrote. “I encouraged every body to embrace their bodies and step outside social norms.”

Her post on July 30 — with photos showing her wearing nothing but a medusa-inspired wig and Christian Louboutins heels in front of a statue of the school’s snake mascot, “Rattler” — has since racked up nearly 48,000 likes on Instagram.

But many commenters were turned off by the nudist HBCU grad revealing her goodies, blasting her approach of body positivity.

“I wish you could’ve thought of other ways to represent body positivity. Maybe a sheet? A snake cover up? Anything but being booty ball naked on campus,” one user wrote.

Another bashed the photoshoot as “crazy & classless,” writing, “Why are you on campus naked bent over?”

“Highlight your education, beauty, and your accomplishments NOT your naked body in front of a prestigious University,” one critic said.

Some even questioned if the graduate should have her degree revoked for supposedly disrespecting the rattlesnake statue.

“This isn’t okay! Cause now you working backwards wanting your degree revoked I’m so confused !?!” commented one disappointed user.

William Hudson Jr., the vice president of student affairs for FAMU, said the school was investigating.

“The university is aware of the picture taken and is currently investigating the incident,” Hudson wrote in a statement shared on Twitter.

In order to prevent more nude graduation photos on campus, the university announced there will be 24/7 surveillance where the statue is located, according to WCTV.

Williams, who calls herself “Ms. Venom,” shared that despite maintaining a 3.8 GPA, “Many people questioned my capabilities and intelligence solely based on how I choose to dress.”

“How the people from the highest of seven hills praying on my downfall?! My degree was earned, not given. They cannot take it away.” she wrote on Instagram this week.