Florida dog groomer accused of hitting, pulling hair of pets in his care 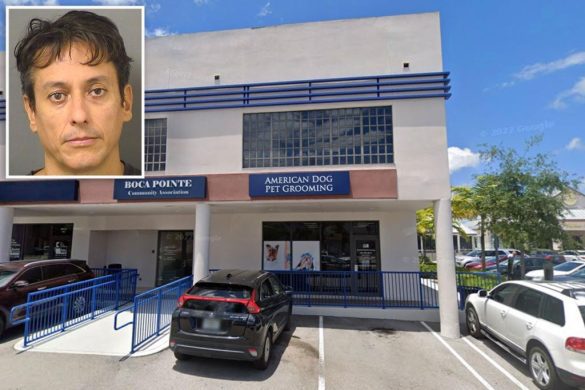 An owner of a South Florida dog grooming business has allegedly been caught on camera abusing the pets under his care, according to authorities.

De Camargo’s alleged abuse was exposed after an employee tipped off the Palm Beach County Sheriff’s Office and caught de Camargo in the act in five videos, according to WPBF-TV.

The television station obtained the arrest report that outlined the alleged abuse that resulted in de Camargo’s arrest Friday.

De Camargo, 47, “intentionally tormented two dogs in his care by punching and striking the dogs multiple times, while pulling the dogs hair in a cruel and inhumane manner,” detectives wrote on the report.

The employee told authorities her boss “abuses dogs on a daily basis by hitting them with his hand, a brush, a nail file, clipper or other grooming items,” the report states, adding the employee believes de Camargo “gets frustrated when dogs misbehave and hits them so they will stop moving.”

One video shows a man striking a small tan dog twice before the pup “yelps and cries, and appears to be in pain from the man hitting it,” according to detectives.

The videos capture the same man pulling or twisting the hair of dogs, even picking one dog up by the hair, according to the arrest report.

The employee identified the man in the video as de Camargo, the report indicates.

There was a previous tip to the Palm Beach County Animal Care and Control that a dog was abused at the business and later died at the vet, but investigators lacked enough evidence to keep the probe open, WPBF reported.

Authorities were told the co-owner would cover up their partner’s alleged abuse by telling the owners of hurt dogs their pets “had a difficult time being groomed” and they should take them to the vet, the report states.

He reportedly could face a year in jail if convicted.

How to Prepare for the Time Change

A favor de las relaciones que se quedan 10 por...
3 mins ago
Latvia probes into exiled Russian TV over help to Moscow...
34 mins ago
A Water Spill Can Break Your Audi
1 hour ago