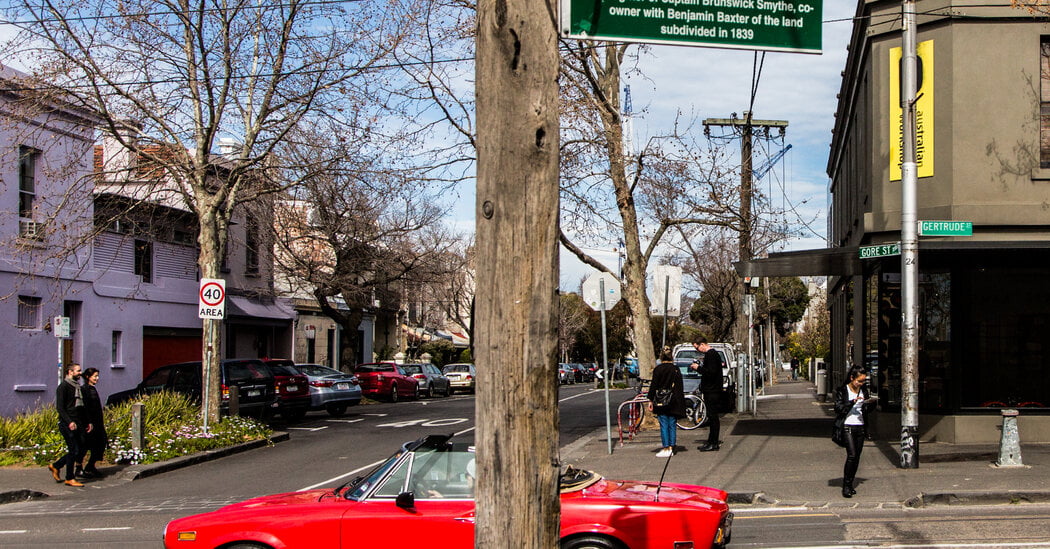 The Australia Letter is a weekly newsletter from our Australia bureau. Sign up to get it by email.

For the past few months, the British American comedian John Oliver has been locked in talks with the Yarra City Council, in Melbourne, in what has become a labyrinthine negotiation involving public art, vandalism, koala chlamydia, a polystyrene recycling machine, three disturbing giant metal frogs and a bucket full of cursed baby dolls. This past week, the negotiations reached what (I hope) will become a tipping point, because I really want those frogs to be part of my daily life.

The situation is not easy to summarize, but let’s give it a whirl: In late 2021, the council unveiled a sculpture titled “Fallen Fruit” by the artist Adam Stone on a street corner in the neighborhood of Fitzroy. The Melbourne area, and Fitzroy in particular, has a long history of supporting public art, but this statue had another purpose as well: to help slow down traffic.

Alas, many locals did not appreciate Mr. Stone’s work. A kind of mash-up of Skeletor from “He-Man and the Masters of the Universe,” the Martians from 1996’s “Mars Attacks” and — let’s face it — the absolute worst fruit, the sculpture was later vandalized when someone tried to decapitate it. The city removed the sculpture in order to — well, actually, we have no idea. They won’t say what they’re doing with it, whether it’s been repaired and if it will ever see the streets of Melbourne again.

When Mr. Oliver heard about the situation, he proposed a solution: He would buy the sculpture for 10 Australian dollars; make a $10,000 donation to a Melbourne food bank and a $5,000 donation to the John Oliver Koala Chlamydia Ward at the Australia Zoo Wildlife Hospital in Queensland (another story, which you can read about here); and send Melbourne, as a replacement, a statue of a giant alligator making an impolite hand gesture.

Mr. Oliver has been in similar negotiations with Texas, albeit with a much more straightforward outcome. The beaches of southern Texas have been experiencing a strange phenomenon: multiple baby dolls washing up on shore. These scribbled-upon dolls can be fairly described as nightmare material, partly thanks to their time in the ocean. Judge for yourself. Mr. Oliver offered $10,000 to a local sea turtle rescue organization if the dolls were turned over to him.

He now has the dolls.

Which brings us to this week. Mr. Oliver’s HBO show “Last Week Tonight” (watchable in Australia on the online platform Binge) generally focuses on one issue per episode, and this week it was about inflation. As a prop to explain inflation, Mr. Oliver purchased three giant bronze frog statues. The frogs were doing something with their legs that is not exactly lewd, but not OK, either. While perhaps less disturbing that the banana or the baby dolls, there’s something about these frogs that is both joyful and upsetting. In other words, they are perfect.

Yarra’s mayor, Sophie Wade, rejected Mr. Oliver’s proposal to buy the banana, but she suggested an alternative: he sends the alligator statue, and the city will name its polystyrene recycling machine after Mr. Oliver.

Mr. Oliver has now made yet another counteroffer. While he is no longer willing to part with his alligator statue, he will throw in the three giant frogs, plus the original donations to the food bank and the koala chlamydia ward. The only thing Yarra needs to do in return is name the polystyrene recycling machine after him and then take the bucket of cursed baby dolls and run them through the machine so as to “destroy them forever.”

Seems like a good deal, right? The only problem: the dolls are not made of polystyrene. They may damage the machine.

I reached out to the Yarra City Council and Mayor Wade to find out if my assumptions were correct, and to ask her what the negotiating has been like. Unfortunately, she is on vacation and her office was hesitant to reveal anything at all — even whether or not you can put cursed baby dolls through a polystyrene recycling machine.

But I am holding out hope that a deal can be struck, not least because the corner where this all started is three blocks from my house. I walk past it almost every day. I would love to have these frogs decorate the neighborhood, in no small part because they are so very silly and Fitzroy is so very trendy (for those not familiar, this is a neighborhood that I once described as putting Williamsburg and Silver Lake, Calif., to shame on the hipster scale), and there is no way that anyone could ever look at those frogs and see anything but ridiculousness.

And now, this (week’s stories):