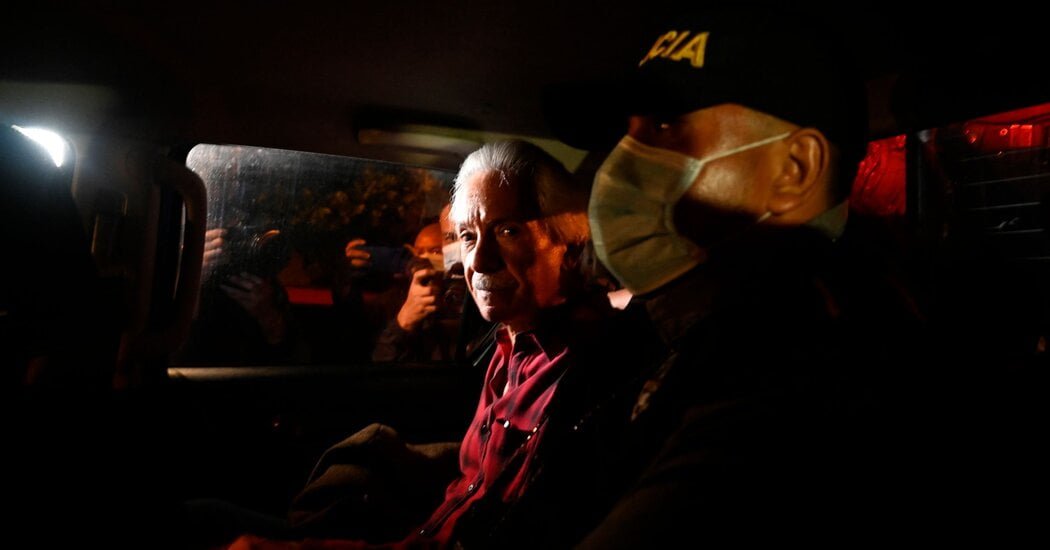 In another sign of growing political repression in Guatemala, the authorities have arrested an award-winning journalist who was critical of the government and raided the offices of the newspaper he founded.

José Rubén Zamora, president of the El Periódico newspaper, was arrested at his home in Guatemala City on Friday night on charges including possible money laundering, blackmail and influence peddling, according to the Guatemalan attorney general’s office.

“There must be a conspiracy, a persecution,” Mr. Zamora told reporters outside his home as he was being held by the police. “If that’s the case, we must pay for the love of Guatemala with jail time.”

Mr. Zamora’s arrest is the latest move by Guatemalan authorities to stifle political dissent and crush attempts to expose graft in the government of president Alejandro Giammattei, which has become an increasing challenge for the Biden administration and its goal of stamping out corruption in Central America.

In May, the State Department announced sanctions against the country’s attorney general, María Consuelo Porras, accusing her of involvement in “significant corruption” and of attempting to derail investigations into graft, by firing of prosecutors and more.

“During her tenure, Porras repeatedly obstructed and undermined anti-corruption investigations in Guatemala to protect her political allies and gain undue political favor,” Secretary of State Antony Blinken said in a statement.

The sanctions appeared to have little effect.

Earlier this month, Ms. Porras ousted eight prosecutors in a matter of weeks, according to Human Rights Watch, including Hilda Pineda, who had taken former president Efraín Ríos Montt to court for crimes including genocide.

As well as arresting Mr. Zamora, authorities detained an assistant prosecutor in the special prosecutor’s office against impunity, Samari Carolina Gómez Díaz, for “revealing confidential information,” Rafael Curruchiche, who leads the anti-impunity office, said in a video message on Twitter.

Earlier this month, Mr. Curruchiche was placed on a State Department list of people from Central America accused of having “knowingly engaged in acts that threaten democratic processes or institutions, engaged in significant corruption, or obstructed investigations,” barring them from entry into the U.S.

In the video statement, Mr. Carruchiche repeatedly insisted that Mr. Zamora’s arrest “has no relation to his work as a journalist” but was instead related to “his position as a businessman.”

Under Mr. Zamora’s leadership, elPeriodico had reported on several allegations of corruption within the Giammattei administration, including within the prosecutor’s office, and his sudden arrest was widely criticized by human rights groups.

“This case could be a breaking point for the guarantees of freedom of expression in Guatemala,” said Juan Pappier, senior Americas researcher at Human Rights Watch, in an email. “If this continues like this, there will soon be no one who can effectively expose and curb corruption and abuse of power in the country.”

Beyond arresting Mr. Zamora, the Guatemalan authorities also raided elPeriodico’s offices on Friday evening, forcing some 30 employees out of the building, while several others were held inside the offices all night with their phones taken away, the newspaper reported.

The Association of Guatemalan Journalists said in a statement that the raid was carried out “to censor the Saturday print edition of elPeriodico.”

“The accusations against Zamora and elPeriodico are part of a campaign of persecution, criminalization and censorship,” the statement read, “against media outlets and journalists that do not bow to the interests of state authorities.”

Mr. Zamora has been internationally recognized for his work in Guatemala, with honors including the Maria Moors Cabot Prize from Columbia University and an International Press Freedom Award from the Committee to Protect Journalists.

In a video posted on social media on Saturday, Mr. Zamora spoke from behind bars, saying he would begin a hunger strike in protest of his arrest.

“Let me die if necessary,” he said. “But let there be justice.”