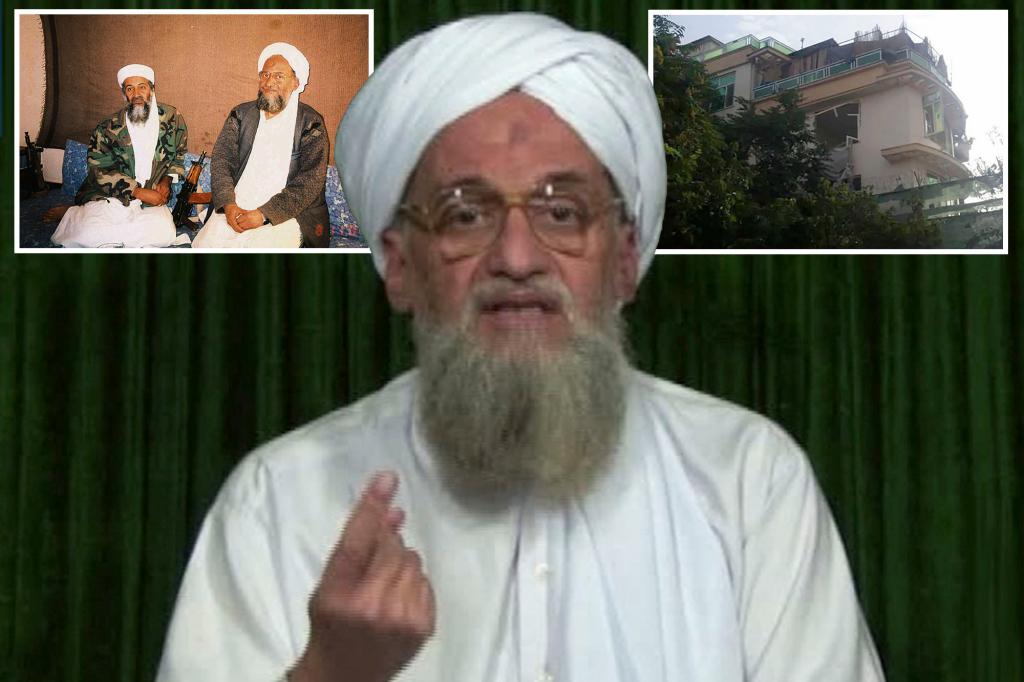 US intelligence had hunted Al Qaeda leader Ayman al-Zawahiri for decades — then spent several months meticulously planning his death once they traced him to Afghanistan, where he was put up as a guest of the ruling Taliban following the disastrous US withdrawal last year.

The coward who co-planner the Sept. 11 attacks had become the world’s most wanted terrorist soon after his cohort, Osama bin Laden, was killed in a daring US raid in May 2011 — with a $25 million bounty on his head.

Under four presidents, US intelligence operatives hunted al-Zawahri, who was rumored variously to be in Pakistan’s tribal area or inside Afghanistan.

The CIA came tantalizingly close to possibly capturing al-Zawahri in 2003, and then killing him in 2004.

The agency thought it finally had him in its sights in 2009, only to be tricked by a double agent who blew himself up, killing seven agency employees and wounding six more in Khost, Afghanistan.

He was finally pinpointed earlier this year in Afghanistan’s capital, Kabul, staying with his wife, his daughter and her children in a safe house supported by the Haqqani Taliban network, officials said.

“We were able to build a pattern of life through multiple independent sources of information to inform the operation,” a senior administration official told reporters Monday.

Throughout that time, the terrorist appeared to never leave the safe house — but was spotted on “multiple occasions, for sustained periods of time” on the balcony where he would ultimately be pulverized Sunday.

Through May and June, a small circle of officials across the government worked to vet the intelligence and devise options for Biden, the officials said.

Biden was then briefed on the proposed strike by his national security aides on July 1, after returning from a five-day trip to Europe.

Officials had painstakingly constructed “a pattern of life” to pin down al-Zawahri’s movements, even building a scale model of the safe house that was shown to Biden in the White House Situation Room.

The president received a final briefing on July 25, as he remained isolated in the White House residence with COVID-19, the insiders said.

Biden — who had tried to halt then-President Barack Obama’s deadly strike on bin Laden — this time gave the sign-off for “a precise tailored air strike” as soon as the opportunity arose, officials said.

That opportunity came early Sunday — late Saturday in Washington — after what Biden described as “clear and convincing” that they could kill him in a way to “minimize the risk of harm to other civilians.”

A further 36 hours of intelligence analysis would follow before U.S. officials began sharing that al-Zawahri was dead.

The Haqqani Taliban network was seen restricting access to the safe house and relocating the dead al-Qaida leader’s family — which officials interpreted as the country’s rulers trying to conceal the fact that they had harbored the world’s most wanted terrorist.

“Justice has been delivered and this terrorist leader is no more,” Biden finally told the nation Monday.

“Now we make it clear again tonight, that no matter how long it takes, no matter where you hide: if you are a threat to our people, the United States will find you and take you out,” he said.

Ayman al-Zawahiri was just 15 when he was known to have sought to overthrow Egypt’s “infidel” regime, ultimately serving three years in prison in connection to the 1981 assassination of Egyptian President Anwar Sadat.

It was after his release in 1984 that he first courted bin Laden — who was wowed by his soon-to-be right-hand man’s lifelong devotion to jihad.

He was impressed that Al-Zawahri “spent time in an Egyptian prison, he was tortured. He was a jihadi from the time he was a teenager.”

The pair were high on the intelligence radar for decades before Sept. 11., with al-Zawahri assumed to lead Al Qaeda’s tactics and organizational skills while his supposed leader supplied charisma and cash.

“For decades, he was the mastermind behind the attacks against Americans,” President Biden said Monday as he declared that “justice has been delivered” with Al-Zawahri’s death.

As the commander-in-chief noted, the terrorist “played a key role, a key role in the bombing of US embassies in Kenya and Tanzania, killing 224 and wounding over 4,500 others” in 1998.

He was then behind “the USS Cole in 2000, which killed 17 American sailors and wounded dozens more,” Biden stressed.

“He carved a trail of murder and violence against American citizens, American service members, American diplomats and American interests,” he said.

When the US invaded Afghanistan after the 9/11 attacks in 2001, al-Zawahri and bin Laden fled to Pakistan — as a US airstrike killed al-Zawahri’s wife and at least two of their six children.

He was named Al Qaeda’s leader less than two months after bin Laden was killed in a US raid on his compound in Abbottabad, Pakistan, leading the global network from isolation.

By the time Al-Zawahiri was finally pulverized by two US Hellfire missiles Sunday, he had devoted nearly all of his 71 years to terrorism.

White House national security spokesman John Kirby said Tuesday the US had no DNA confirmation on his death, but had verified his identity through other sources.

“We do not have DNA confirmation. We’re not going to get that confirmation. Quite frankly, based on based on multiple sources and methods that we’ve gathered information from, we don’t need it,” Kirby told CNN.