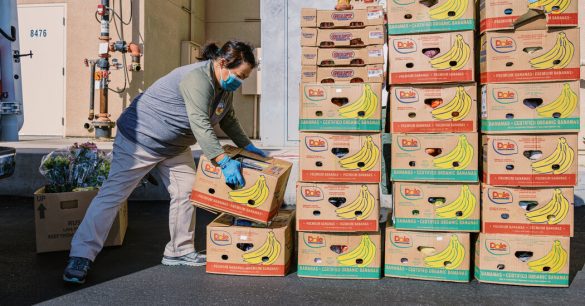 In Seoul, garbage cans automatically weigh how much food gets tossed in the trash. In London, grocers have stopped putting date labels on fruits and vegetables to reduce confusion about what is still edible. California now requires supermarkets to give away — not throw away — food that is unsold but fine to eat.

Around the world, a broad array of efforts are being launched to tackle two pressing global problems: hunger and climate change.

Food waste, when it rots in a landfill, produces methane gas, which quickly heats up the planet. But it’s a surprisingly tough problem to solve.

Which is where Vue Vang, wrangler of excess, comes in. On a bright Monday morning recently, she pulled up behind a supermarket in Fresno, Calif., hopped off her truck and set out to rescue as much food as she could under the state’s new law — helping store managers comply with rules that many were still unaware of.

Laid out for her was a shopping cart of about-to-expire hamburger buns and cookies. She knew there must be more. Within minutes, she had persuaded the staff members to give her several crates of milk marked “best by” the next day, as well as buttermilk and boxes of brussels sprouts, kale, cilantro, cut melons and corn. She nudged them: Are there eggs?

“So much. So much goes to waste,” whispered Ms. Vang, who works with a local charity, Fresno Metro Ministry, to give food to people in need.

In the United States, the single largest volume of material sent to landfills and incinerators comes from food waste. Worldwide, food waste accounts for 8 to 10 percent of global greenhouse gas emissions, at least double that of emissions from aviation. According to estimates from the Food and Agriculture Organization of the United Nations, that is enough food to feed more than a billion people.

Amid the growing urgency to slow global warming, governments and entrepreneurs are coming up with different ways to waste less food. In the United States, one start-up makes it easier for people to buy misshapen produce that grocery stores don’t want, and another has developed an invisible, plant-based coating to make fruits last longer. A Kenyan entrepreneur has built solar-powered refrigerators to help farmers store produce longer.

In Asia, Europe and the United States, several new mobile apps offer discounts on restaurant food that’s about to be thrown out. Last year, China’s top leader, Xi Jinping, began a “clean plate” campaign, calling for an end to the “shocking and distressing” squandering of food, even cracking down on video bloggers who eat excessive amounts of food on camera.

All these different efforts point to a disconnect in the modern global food system: A lot of food is produced but not eaten, even as people go hungry.

California’s law is the most ambitious in the United States. Grocery stores are required to donate to groups like Ms. Vang’s “the maximum amount of edible food that would otherwise be disposed,” or soon face fines. In addition, every city and county must reduce the organic waste that goes into landfills by 75 percent by 2025, and compost it instead.

Fresno County, where Ms. Vang works, is home to dairy farms and almond groves, and has one of the highest rates of hunger in California. Twenty-three percent of children in the county don’t always have enough food.

Just as Ms. Vang was leaving the store that day, a store manager was stuffing garbage bags with gallon bottles of milk. “All these are going to the trash?” she asked. They were. They had just expired.

Throwing away crops that have been planted, watered, harvested, packaged and shipped is a relatively new problem in human history. For centuries, people used everything they could: the stalk of a banana tree, vegetable peels, a carrot that grew twisted underground.

Today, 31 percent of food that is grown, shipped or sold is wasted.

The problem of food waste isn’t just one problem, but many. Sometimes it’s a refrigeration issue (milk spoils in a blackout) or stringent supermarket standards (no gnarly carrots) or poor human planning (forgotten salad greens that turn to slime in the fridge) or giant portions at restaurants. Seventy percent of discarded restaurant food in the United States comes from food that’s paid for, but uneaten, according to ReFED, a nonprofit focused on reducing food waste.

Overall, one-third of the U.S. food supply goes uneaten, according to the Environmental Protection Agency.

ReFED estimates that food waste emissions, from farm to fork to landfill, are equivalent to that of 72 coal-burning power plants.

Like California, several American states are trying to tackle one piece of the problem with mandatory composting measures. If California succeeds, it could reduce emissions by an amount equivalent to taking three million cars off the road, according to CalRecycle, the state agency that handles waste. Compost is extremely useful for improving soil, and there is a market for compost in a state reeling from drought.

“It is a huge deal,” Rachel Machi Wagoner, the director of CalRecycle, said in an interview. “We are trying to turn waste into a resource.”

But that solves only a small part of the problem. It’s fine to compost orange peels and eggshells. But it doesn’t solve the problem of the quarter sandwich left on a plate, or the tomato that gets tossed because there are too many left on the supermarket shelves. That, as Dana Gunders, the executive director of ReFED, pointed out, is a significant waste of water, land, fertilizers, diesel and refrigerants, along with hard manual labor.

“It’s better not to produce it if you know it won’t be eaten,” she said. “To do that requires redesigning systems. It’s not as easy as throwing something in the compost bin.”

Yes to doggy bags; no to date labels

Supermarket chains in Britain started removing date labels on produce after research showed that including them led people to trash perfectly good food. Elsewhere in Europe, France now requires supermarkets and large caterers to donate food that is still safe to eat, and in Spain, a proposed law would require restaurants to offer what’s relatively uncommon: doggy bags for uneaten food.

Then there is South Korea, where a campaign against throwing food away was born nearly 20 years ago out of necessity. The country’s narrow, mountainous land mass was running out of space for landfills. No more food waste in landfills, the government decreed.

Today, almost all organic waste is turned into animal feed and compost and, more recently, into biogas. There is also a price on waste. Koreans pay for what they toss.

In the latest experiment, the government has rolled out trash bins equipped with radio-frequency identification sensors that weigh exactly how much food waste each household tosses each month. If people don’t have the sensor-equipped trash cans, they must buy separate, biodegradable food-waste bags, which end up costing even more.

One Sunday afternoon, in the trash room of an upper middle class neighborhood in Seoul, the sensors went to work. One man opened a bin with the swipe of a card, emptied his bucket of slop and returned home. A woman said the high-tech bins saved her the hassle of having to buy the special food-waste bags.

Suyeol Hong, who lives in the complex and is also one of the country’s most prominent food waste campaigners, said the new bins had made the trash room cleaner, less smelly. But while South Korea’s policy to divert food waste from landfills had reduced methane emissions, he noted, it hadn’t really changed habits. A lot of food is still wasted, particularly at restaurants, where banchan — an assortment of side dishes served at no extra cost — is often left at the table at the end of a meal, he said. Efforts to make people pay for banchan have not been popular.

“I don’t think it’s easy to reduce food waste in Korea,” Mr. Hong said. Even when his own family cleans out the fridge, he added, there is inevitably an extra rice cake from a holiday long ago, bound for the compost bin.

Still, South Korea has made improvements. Food waste declined from nearly 3,400 tons a day in 2010 to around 2,800 tons a day in 2019, according to Ko Un Kim of the Seoul Institute, a research group affiliated with the city government.

Detour from the dump

In addition to composting, California’s food waste law is unusual in the United States for pushing retailers to donate edible but unsold food. (Washington has a similar law that takes effect in 2025.) Food waste campaigners are lobbying Congress to include money in the U.S. farm bill next year to help state and local governments enact similar food rescue measures.

The challenges are already playing out across California.

Many cities don’t yet offer compost bins to households. Many people who have compost bins don’t know what belongs in there and what doesn’t. Chicken bones are fine. Dog poop bags are not — not even when the poop is in so-called compostable bags, which aren’t always compostable.

“It drives me crazy,” Ms. Wagoner of CalRecycle said.

Many more composting facilities will have to be built, which is hard in urban areas. And composting can sometimes have a counterintuitive effect. One behavioral science study found that when people know their food waste will be composted, they are more likely to waste it.

Ms. Vang, the lead driver for Fresno Metro Ministry’s food share program, is barely 5-foot-2. But in the back rooms of supermarkets, she is a large presence.

She began rescuing food nearly five years ago, when a farmer phoned the ministry and said he had tomatoes he couldn’t sell. Soon, a landfill manager called after a garbage truck showed up with perfectly fine bananas.

It was only when Ms. Vang saw those mountains of food did she begin to understand how much was being squandered. It hit her hard, she said, because so many of her neighbors could not afford the very things that were being dumped. “We are a big agricultural town, but a lot of people lack healthy eating,” she said.

Needs have sharply risen. First because of the coronavirus. Then inflation. Sometimes people stop her when they see her food rescue truck driving by. College students. Farmworkers. Regular people who could use a hand.

She gets it. She is a mother of four. “I know,” Ms. Vang said. “Grocery shopping is hard.”

John Yoon contributed from Seoul and Vivian Wang from Beijing.

What Is Mushroom Compost Is It Good For Gardening? 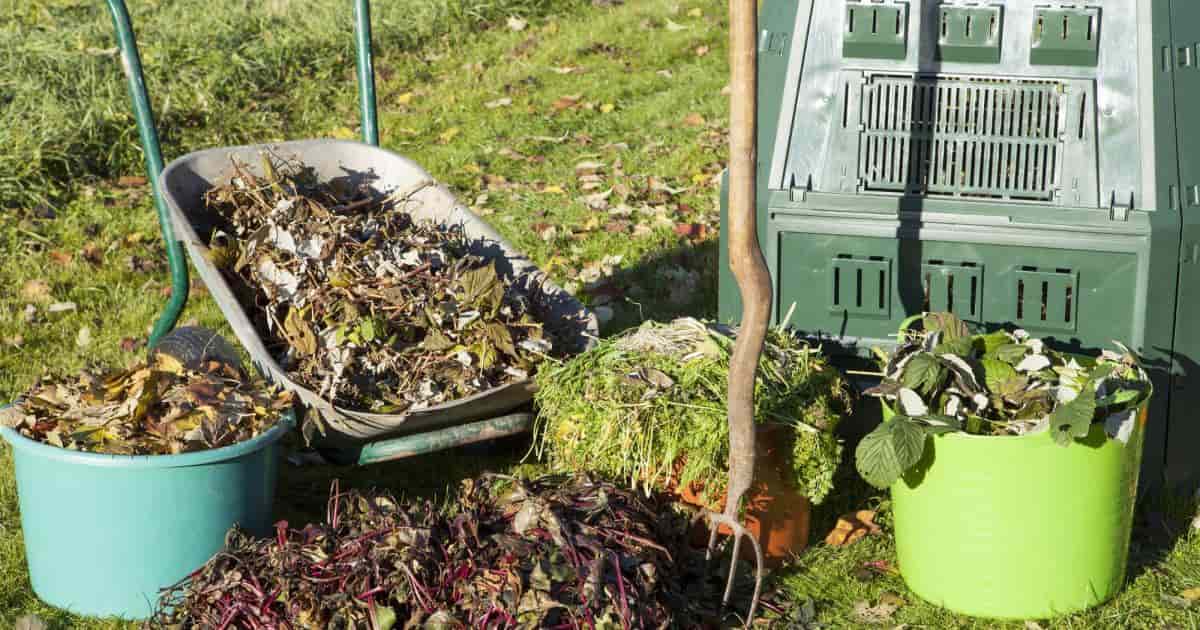 How Do You Know When Compost Is Ready 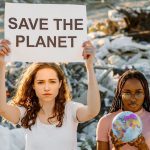 What You Can and Can’t Dispose Of
Share 0 FacebookTwitterPinterestLinkedinRedditEmail

What Is The Best Pot For Snake Plants?