Home » Israel is between governments (again). Will Biden’s visit help the interim leader get elected?
News

Israel is between governments (again). Will Biden’s visit help the interim leader get elected? 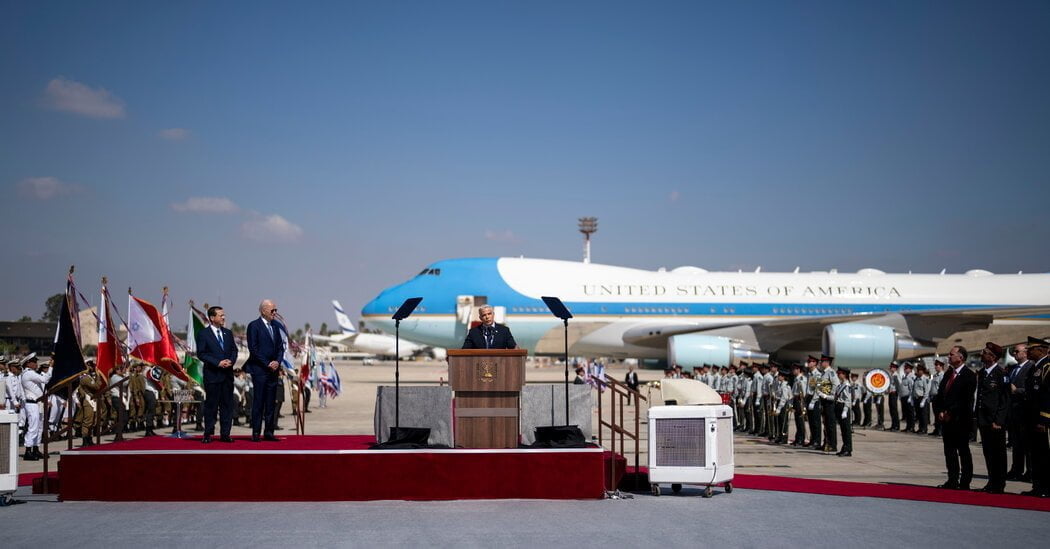 JERUSALEM — President Biden, who prides himself on having known every Israeli prime minister over half a century, is meeting on Thursday with a new one: Yair Lapid, the leader of a caretaker government.

Unusually for a presidential visit, Mr. Biden has arrived in Israel amid an election campaign, as Israelis prepare to head back to the ballot box on Nov. 1. Yet given the country’s long political impasse and government instability, American officials would have been hard pressed to find a time when Israel was not in campaign mode.

The last governing coalition, an unwieldy alliance of eight ideologically disparate parties led by Naftali Bennett, lost its razor-thin parliamentary majority in June and collapsed just a year after being sworn in. This will be Israel’s fifth election in under four years.

While protocol demands that Mr. Biden avoid being drawn into domestic politics, his very presence could provide a boost to Mr. Lapid, who is running for the premiership and is polling second after Israel’s longest-serving prime minister, Benjamin Netanyahu. Still, a presidential visit is no guarantee of success for an incumbent.

President Bill Clinton famously came to Israel for a 22-hour visit in March 1996, four months after the assassination of Prime Minister Yitzhak Rabin by a Jewish extremist who opposed the peace process with the Palestinians and about 10 weeks before a highly charged national election. Shimon Peres was prime minister at the time, but a wave of deadly Palestinian suicide bombings that killed more than 60 civilians had damaged his national standing.

Mr. Clinton had clearly come to try to bolster the prime minister’s chances, and to try to revive Israeli faith in the peace process. Nevertheless, Mr. Peres lost to Mr. Netanyahu, who served for three years until 1999, then returned to office a decade later.

Mr. Lapid, 58, the leader of the centrist Yesh Atid, has already served in government as a minister of finance, strategic affairs and foreign affairs, and as an alternate prime minister, along with a stint as the leader of the opposition. But he also suffers from a lack of security credentials in the eyes of many Israelis. Discussing weighty issues such as the Iranian nuclear threat with Mr. Biden could help burnish his image as a statesman.

“In Israeli history, the people who naturally entered the prime minister’s office had a security background,” Nahum Barnea, a veteran political commentator for the popular Yediot Ahronot newspaper, said in a recent interview, citing decorated generals who went on to become prime minister, such as Mr. Rabin, Ehud Barak and Ariel Sharon.

“It used to be a prerequisite,” Mr. Barnea added, noting that Mr. Lapid had spent most of his obligatory army service as a writer for a military magazine.

In remarks broadcast at the start of the weekly cabinet meeting on Sunday, Mr. Lapid said that Mr. Biden’s visit would deal with “both challenges and opportunities,” with the discussion of the challenges focusing first and foremost on the issue of Iran, its enrichment of uranium, and Israel’s efforts to thwart Iran’s nuclear program.

“Israel will not stand idly by while Iran tries to attack us,” Mr. Lapid said, echoing the tough messages of his predecessors. “Our security services know how to reach anyone, anywhere — and they will do just that. We will discuss with the president and his team expanding security cooperation against all threats.”

After arriving in the country on Wednesday, Mr. Biden greeted Mr. Lapid warmly and draped an arm over his shoulder as if they were longtime friends. At a welcome ceremony moments later, Mr. Lapid called the American leader “a great Zionist and one of the best friends Israel has ever known.”

Beirut’s collapsing silos and the fading memory of a tragedy