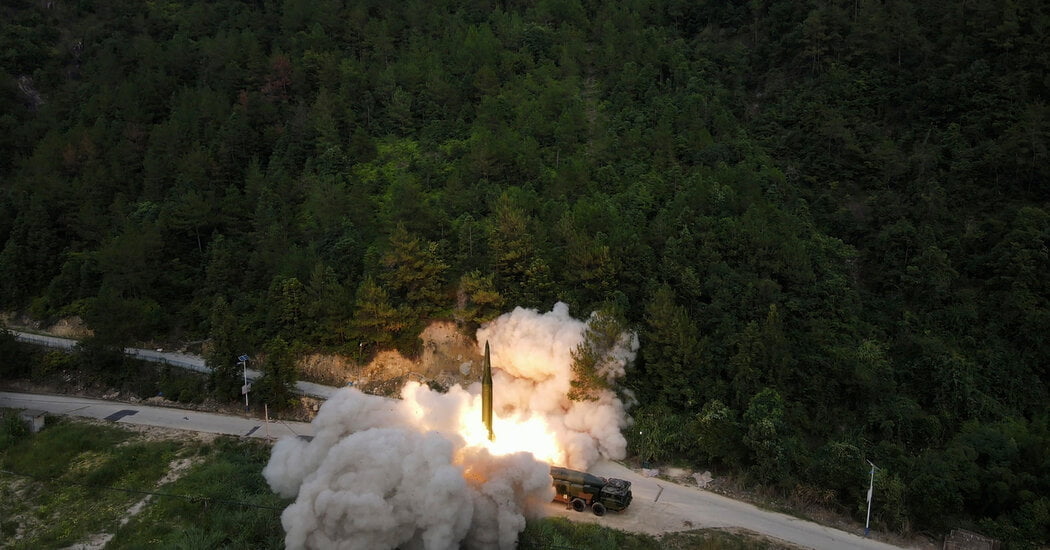 Japan’s leader on Friday called for China to stop its military exercises around Taiwan, a day after five of the Chinese missiles launched during the drills landed in waters claimed by Japan for its exclusive economic use.

Prime Minister Fumio Kishida called for “an immediate halt” to the exercises, which he said were having “a serious impact on the peace and stability of the region and the world,” Kyodo News reported. He spoke to reporters after meeting with Speaker Nancy Pelosi, whose high-profile visit to Taiwan this week infuriated China and led to the military drills.

Ms. Pelosi said that China “may try to keep Taiwan from visiting or participating in other places but they will not isolate Taiwan.”

At least 11 Chinese missiles landed in waters to the north, south and east of Taiwan on Thursday, the first day of the exercises, which are scheduled to end on Sunday. The People’s Liberation Army of China said they had “all precisely hit their targets.” Japan said five of them had fallen into its exclusive economic zone, outside its territorial waters.

Besides demonstrating Beijing’s displeasure with her visit, the drills — scheduled to be held in six zones encircling Taiwan — appear to have been designed as a trial run for sealing off the island as part of a potential invasion. China’s leaders, including the current one, Xi Jinping, have long said that Taiwan must eventually be brought under Beijing’s control, by force if necessary.

The drills have put the United States in a delicate position. While the Pentagon wants to protect strength in the region, it is also sensitive to the risk that a military miscalculation near the island could set off an unintended escalation.

John Kirby, a national security spokesman, said on Thursday that the Pentagon had ordered the U.S.S. Ronald Reagan to “remain on station” in the region, but some distance from the entrance to the Taiwan Strait. That represents a more cautious move than one made during a crisis over Taiwan in 1996, when President Bill Clinton moved aircraft carriers closer to the strait.

The United States will resume “standard air and maritime transits through the Taiwan Strait in the next few weeks,” Mr. Kirby added, an indication that the White House wants the Chinese exercises to end first.

On Friday morning, the United States Navy’s 7th Fleet posted photos on Twitter of fighter jets on the deck of U.S.S. Ronald Reagan during what it said were “flight operations” in the Philippine Sea, southeast of Taiwan.

It was unclear early Friday how the rest of China’s exercises would play out. China’s Eastern Theater Command, which encompasses Taiwan, has said that it was mobilizing more than 100 fighter planes, bombers and other aircraft, as well as more than 10 destroyers and frigates, according to Reuters.