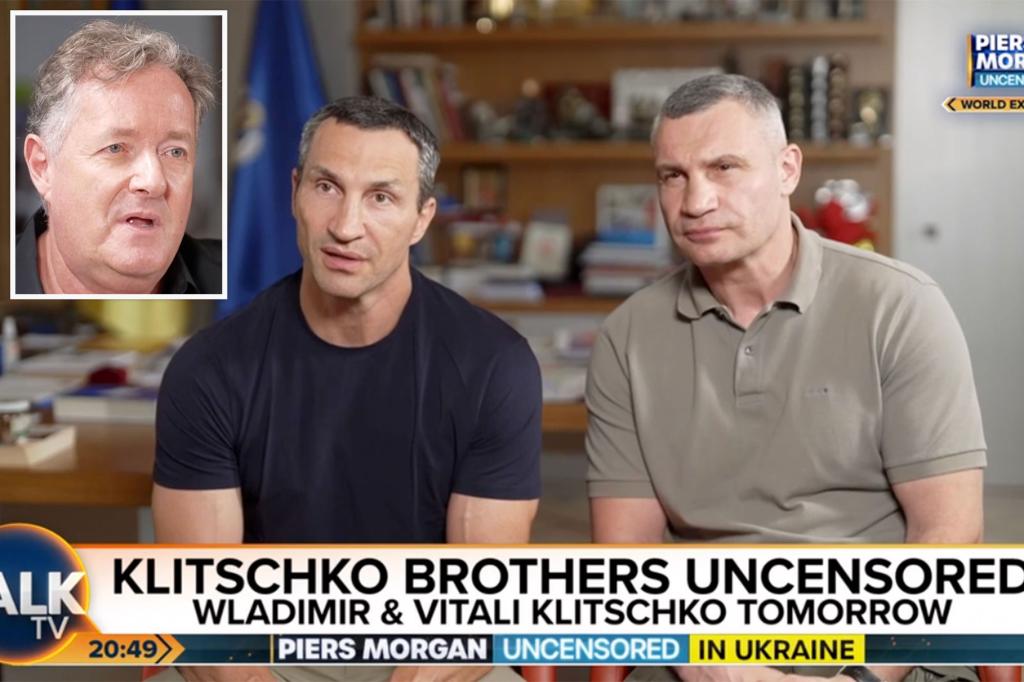 The brothers, both former world heavyweight champions who enlisted in the Ukrainian army to defend the country from Russia, said the images they see while on patrol are “horrifying,” according to a clip of the interview set to air Tuesday on “Piers Morgan Uncensored.”

“Yesterday, we could hear the sounds of artillery explosions, see the death, see the destruction. See buildings — residential buildings — on fire,” Olympic gold medalist Wladimir Klitschko said. “Civilians, children, teenagers, tortured, dead. I can tell you those images are horrifying.”

He said he has also stumbled across cars with bodies inside flattened by Russian tanks.

“The simplest thing you can do — die for [your] country,” Wladimir Klitschko said. “You know what’s the most complicated? Live for your country. That means fight.”

His brother, Vitali Klitschko, the mayor of Kyiv, described a tragic result of the war when he met a young boy who was crying for his parents shortly after Russia invaded Ukraine.

“One woman come to me and, not so loud, tell me, ‘sorry this child don’t know he’s alone,” he said. “His parents [had been] killed.”

The local mayor, however, warned that the war will not just affect Ukrainians.

Thinking the war won’t touch people outside the country is the “biggest mistake,” he said.

“This war can touch everyone in Europe,” Vitali Klitschko said.

Piers Morgan is reporting and broadcasting from Ukraine all this week to shed light on the devastation the country has experienced since Russia invaded five months ago.

He also interviewed Ukrainian President Volodymyr Zelensky and First Lady Olena Zelenska during the week of dispatches. In a tease for the interview, the leading couple said the war and its challenges has strengthened their marriage.

Since Russia invaded Ukraine on Feb. 24, at least 5,237 Ukrainian civilians — including hundreds of children — have been killed and another 7,035 have been injured by Russian troops, according to the latest United Nations count Monday.

Most of the civilian casualties were caused by shelling, rockets, missiles and air strikes.

When You Should Take the Miles for a Canceled Flight

UK to host 2023 Eurovision Song Contest instead of Ukraine