Latvia and Estonia say they have left a Chinese-backed forum aimed at boosting relations with Eastern European countries, in what appears to be a new setback for China’s increasingly assertive diplomacy.

The move follows China’s boosting of its relations with Russia, whose invasion of Ukraine is seen as a possible first step in a series of moves against countries that were once part of the Soviet Union. China has refused to criticise Russia and has condemned punishing economic sanctions imposed on Moscow by the West.

Weeks before the invasion, President and Communist Party leader Xi Jinping hosted Russian President Vladimir Putin in Beijing and declared their bilateral relations had “no limits” in a joint statement.

The move also comes after Beijing launched economic and diplomatic retaliation against another Baltic state, Lithuania, in retaliation for its expanded ties with the self-governing island democracy of Taiwan, which China claims as its own territory and threatens to annex by force. China’s increasing assertiveness and recent threatening military exercises near Taiwan have brought a sharp backlash from the US, the EU, Japan, Australia and others.

“In view of the current priorities of Latvian foreign and trade policy, Latvia has decided to cease its participation in the cooperation framework of Central and Eastern European Countries and China,” Latvia’s Foreign Ministry said in a statement Thursday.

The country “will continue to strive for constructive and pragmatic relations with China both bilaterally, as well as through EU-China cooperation based on mutual benefit, respect for international law, human rights and the international rules-based order,” the statement said.

Estonia issued a similar statement, saying it would “continue to work towards constructive and pragmatic relations with China, which includes advancing EU-China relations in line with the rules-based international order and values such as human rights.”

“Estonia participated in the cooperation format of Central and Eastern Europe and China from 2012. Estonia has not attended any of the meetings of the format after the summit last February,” the statement said.

China set up the forum to strengthen relations with members of the EU as well as Serbia and others, partly to further Xi’s signature Belt and Road campaign to build bridges, railways, power plants and other infrastructure across the Eurasian continent.

China originally styled the forum as a “17 plus one” arrangement, but the number of European partners has now fallen to 14. Critics say the forum was an attempt to exploit differences among those states as part of a larger campaign to join with Russia in undermining the current rules-based international order dominated by the US and its allies.

Along with its stance on Ukraine, China has come under strong criticism for firing missiles and sending ships and warplanes off the coast of Taiwan in response to a visit there by U.S. House Speaker Nancy Pelosi. China strongly opposes all government-to-government contacts between Taiwan and countries which, like the US, maintain only informal ties with the island in deference to Beijing.

Britain summoned China’s ambassador to register its concern over the “increasingly aggressive behavior and rhetoric from Beijing in recent months, which threaten peace and stability in the region,” Foreign Secretary Liz Truss was quoted as saying. “The United Kingdom urges China to resolve any differences by peaceful means, without the threat or use of force or coercion.”

Beijing’s threats against Taiwan are a major contributing factor in the deterioration of US-China relations to their lowest level in decades. China has also engaged in a lengthy feud with Australia and its firing of missiles last week drew condemnation from Japan, whose exclusive economic zone includes waters where the projectiles landed.

In another rejection, South Korea on Wednesday said it will make its own decisions about strengthening its defenses against North Korean threats amid Chinese calls that it continue the policies of Seoul’s previous government that refrained from adding more US anti-missile batteries, which are strongly opposed by Beijing.

Asked about the developments, US State Department spokesperson Vedant Patel said “we respect and support Estonia and Latvia’s sovereign decision to no longer participate.”

“Estonia and Latvia are important and valued NATO allies and key US partners across a number of issues, including through our strong defense ties, our strong economic ties, as well as the promotion of democracy and human rights,” Patel told reporters.

“Over the past year, we’ve seen countries around the world express deep concern about the PRC’s strategic alignment with Russia as well as Beijing’s support for Moscow’s war against Ukraine,” Patel said. “There is a growing convergence about the need to approach relations with Beijing with more realism,” he said, citing previous comments from Secretary of State Antony Blinken.

Concluding a five-day visit to Taipei on Thursday, Lithuanian Deputy Minister of Transport and Communications Agne Vaiciukeviciute emphasized the importance of economic ties with Taiwan and endorsed a statement issued by the Group of Seven industrialised nations criticising the Chinese military exercises surrounding Taiwan. The European Union issued a similar statement, prompting China to summon the group’s ambassadors to register a protest.

“Lithuania is a democracy. Taiwan is our very close friend, and Taiwan is a booming economy,” Vaiciukeviciute said. 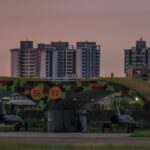 Russia Fortifies Defenses in Southern Ukraine, Analysts Say
14 mins ago
How to Master the Stoic Mindset for Self-Care and Happiness
32 mins ago
Ireland and France launch new combined ferry and train ticket
44 mins ago