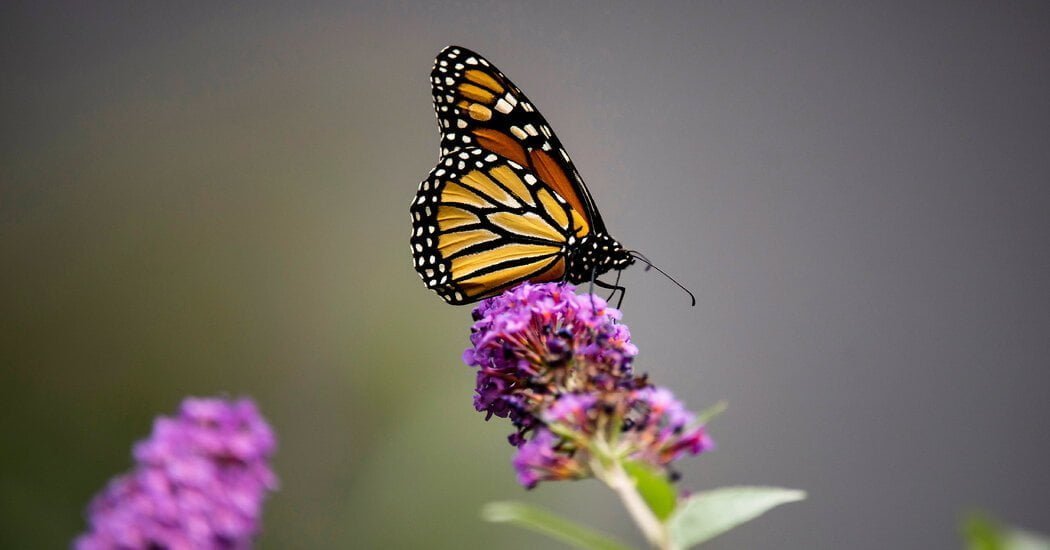 North America’s monarch butterfly, whose showy looks and extraordinary migration have made it one of the continent’s most beloved insects, has been classified as endangered by the International Union for Conservation of Nature, the world’s most comprehensive scientific authority on the status of species.

The decision comes after decades of falling populations driven by losses in the plants they need as caterpillars and in the forests where adults spend the winter, combined with climate change, the assessment found. The authors reviewed about 100 studies, interviewed experts and applied criteria from the group’s Red List of Threatened Species to come up with their decision.

“It’s been so sad to watch their numbers decline so much, so anything that might help them makes me happy, and I think that this designation might help them,” said Karen Oberhauser, a conservation biologist at the University of Wisconsin who has studied monarchs for more than 35 years and contributed to the assessment. “Although it’s sad that they need that help, that they’ve reached the point where this designation is warranted.”

The numbers of Western monarchs, which live west of the Rocky Mountains, plummeted by an estimated 99.9 percent between the 1980s and 2021. While they rebounded somewhat this year, they remain in great peril. Eastern monarchs, which make up most of the population in North America, dropped by 84 percent from 1996 to 2014. The new designation of endangered covers both populations.

In 2020, U.S. wildlife officials found that monarchs were threatened with extinction but declined to add them to the endangered species list because they said conservation of other species took priority.

Extreme heat in Europe. Scientists say that heat waves in Europe are increasing in frequency and intensity at a faster rate than in almost any other part of the planet, including the Western United States. Global warming is one of several factors that may make Europe a heat wave hot spot.

A relentless pattern in Australia. With recent storms bringing 30 inches of rain to areas near Sydney — and with climate change intensifying extreme weather events — Australians are grappling with the prospect that an exhausting cycle of flooding, evacuation, return and months of cleanup will become the new normal.

Coal plants’ new life. Across the United States, defunct coal-burning power plants are getting new lives as renewable energy projects, partly because they have a decades-old feature that has become increasingly valuable: They are already wired into the power grid.

Monarch caterpillars depend on milkweed, the only plants they can eat. After leaving their overwintering grounds, which for most monarchs are concentrated in just a few hectares of forest in central Mexico, females deposit eggs on milkweed plants from Texas to as far north as Canada in a multigenerational journey.

Habitat destruction in those Mexican forests was an early threat, said Anna Walker, an entomologist with the New Mexico BioPark Society who led the assessment. The Mexican government stepped in, creating a reserve in 1986 and expanding it in 2000. While concerns remain over illegal logging and disease, that conservation work has helped, she said, stemming the loss of overwintering habitat quite effectively.

But a new problem came along, the assessment noted: American farmers turned to crops that were genetically modified to withstand glyphosate, a herbicide that is used in the weed killer Roundup.

“Glyphosate was suddenly sprayed over vast acreage of farm in the Midwest,” Ms. Walker said. “That took out a lot of the milkweed plants that the monarch caterpillars rely on.”

Then there’s climate change, which worsens storms, droughts and other such events that can be catastrophic for the already vulnerable populations. Hot dry spring seasons in the south are of special concern to monarch experts. Add to that broader questions about climate change disrupting ancient cycles, such as when plants sprout.

“We’re starting to see this kind of mismatch between when insects are ready to start the spring and when plants are ready,” Ms. Walker said. “There are a ton of unknowns.”

A recent study complicated the picture, finding that summer monarch abundance had declined in some areas while increasing in others, perhaps in part because warmer weather in northern areas were actually helping monarchs thrive in those regions. But even those authors indicated that any silver lining could be short-lived, warning that “accelerating climate change may bring growing threats.”

The Red List decision limits the endangered listing to migratory monarchs, which applies to those in North America. It came out of the group’s first assessment of these butterflies. The broader species includes a nonmigratory variety in the Caribbean and from southern Mexico into northern South America.

The North American monarchs’ migration is considered one of the natural world’s wonders: tiny insects flying thousands of miles north over the course of a few generations and back in just one generation, with single butterflies flying perhaps more than 2,500 miles.

Monarch experts are eager to enlist the public’s help in saving the species. Their message: Plant milkweed that’s native to your region, which probably means avoiding tropical milkweed (it can do more harm than good, especially in the South). Swamp milkweed is an attractive, easy-to-grow variety native to all but the most western areas of the contiguous United States. That’s for the egg-laying and caterpillars. The butterflies need nectar, so plant native flowers that bloom when monarchs are in your area.

“We’re holding our own at a number that’s not quite sustainable,” she said. “But if we didn’t have all of these efforts on the part of a lot of different organizations and individuals, I think the numbers would be even lower.”

The latest I.U.C.N. Red List update also held bad news for sturgeons: All surviving species are now at risk of extinction, up from 85 percent of species in 2009. The Yangtze sturgeon, a fish from China, has gone from critically endangered to extinct in the wild.

Tiger numbers, on the other hand, showed a 40 percent increase since the previous assessment, which the organization attributes to better counting combined with stabilized or increasing numbers.

LIPSTICK IN A SHOE💄 Fantastic Shoe Crafts You Will Love

My Boyfriend’s Ex Moved Across the Street From Us. Again. Should We Move?