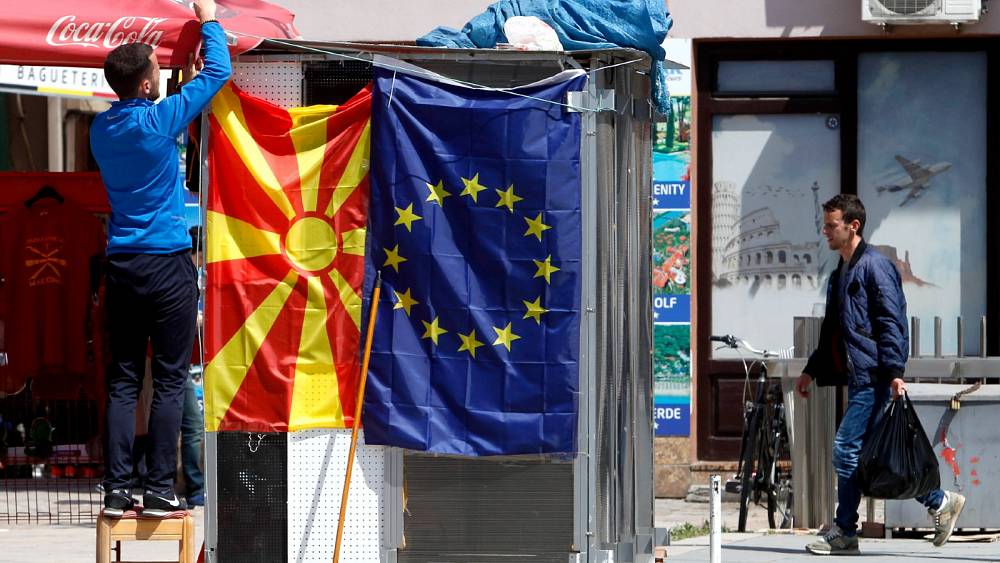 Ursula von der Leyen on Thursday visited Skopje to urge Macedonian lawmakers to back a proposal that would allow the country to start EU accession negotiations.

The president of the European Commission told the North Macedonia parliament during an address that the proposal by the French presidency of the EU — which ended on June 30 — is “of historic importance”.

“Honourable members, many of you will be understandably frustrated that your country has not yet begun accession negotiations. Let me tell you: I am too,” she added.

She told MPs that if they backed the proposal  “we – the Commission – will then start, immediately, the process of screening the acquis. This is the first step in the negotiation process,” and emphasised that accession negotiations start “as soon as next week”

“We are convinced that this is of historic importance. But the decision is yours to take and yours alone,” she said.

North Macedonia first became a candidate country for EU membership in 2005 with the European Commission recommending in 2009 that accession negotiations be opened but these have been stalled for years due to multiple vetoes.

Greece blocked their attempt over a name dispute which was resolved in 2018 through the Prespa Agreement under which Skopje accepted to add “North” to its name. Bulgaria then said it could not approve opening accession negotiations over historical and cultural ties as well as the rights of ethnic Bulgarians in the country.

Sofia lifted its veto on June 24 following a proposal from the French EU presidency which provided that North Macedonia formally acknowledge a Bulgarian minority in its constitution. An earlier version of the proposal also required North Macedonia to formally recognise its language has Bulgarian roots, but this proved too contentious.

The Macedonian government also backs the proposal but protests, called by the main opposition VMRO-DPMNE party, have been ongoing since the beginning of the month.

In her address to MPs, which was interrupted at several points, von der Leyen made a case for the proposal, which she said, “protects your interests and addresses the concerns of all sides. Be reassured that the Commission, that has always stood beside this country, continues to do so today and will continue to be there with you tomorrow and the day after.”

She also underlined that “there can be no doubt that the Macedonian language is your language. We fully respect that,” she added, triggering a round of applause and cheers from the room.

“That’s why the revised proposal refers to the Macedonian language, without qualification by the EU. The proposal also respects your national identity,” she went on.

She praised the country for the work it has undertaken to crack down on corruption, enhance the rule of law, protect human rights and the rights of all communities. She also said that “benefits will accrue”, in terms of foreign investments, and trade links, if lawmakers agreed to “opening this door” to accession negotiations.

BRILLIANT CAMPING HACKS FOR YOUR NEXT TRIP

Losing the Race, but Winning Each Other

Salman Rushdie ‘talking and joking’ a day after brutal attack