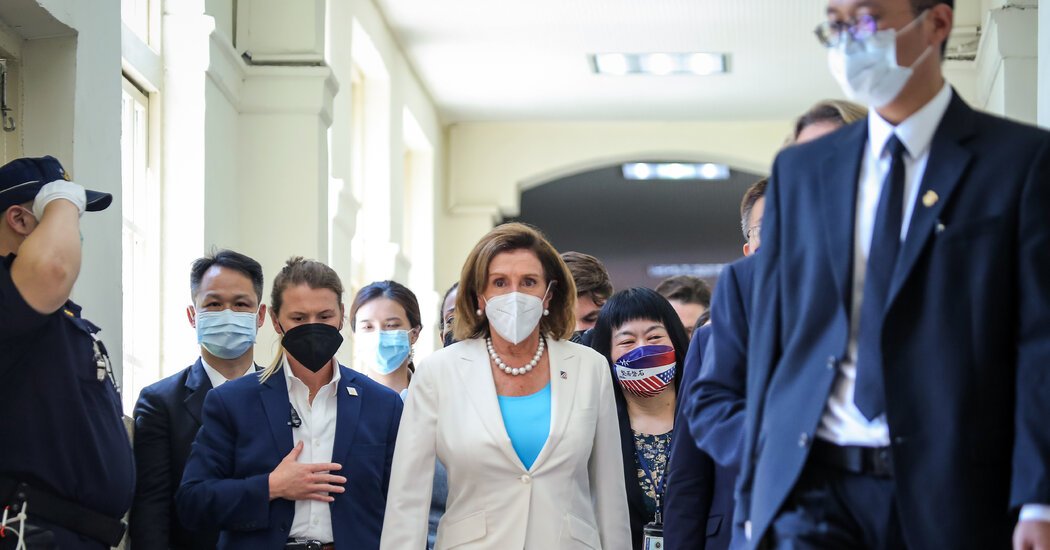 The Biden administration has spent months building an economic and diplomatic strategy in Asia to counter China, shoring up its alliances and assuring friendly countries that the United States is in the region for the long haul.

The president has sent top military officials to seal new partnerships, and paid attention to a tiny nation in the Pacific, the Solomon Islands. He has launched a plan to arm Australia with nuclear-powered submarines and initiated a regional economic pact. He visited South Korea and Japan in May, and for the first time invited the two countries to a NATO meeting, to reinforce that Asia wasn’t forgotten as war raged in Ukraine.

The visit to Taiwan by Speaker Nancy Pelosi now threatens to undermine the push by the White House, leaving allies to wonder what damage had been done to the president’s united front in Asia.

The fear is that the trip, which will also include stops this week in South Korea and Japan, is an unnecessary provocation that distracts from the allies’ efforts to counter China’s military might and economic clout.

While U.S. allies have largely remained mum on the visit so far, there’s a sense among America’s friends that they were left out in the cold to watch as China threatened the United States and Taiwan, the self-governed island that China claims as its own.

The handling of Ms. Pelosi’s visit was worrisome because, intentionally or not, it showed China’s power and diminished the role of the allies, said Seong-Hyon Lee, a South Korean fellow at the Fairbank Center for Chinese Studies at Harvard University.

“The very fact that China’s potential response becomes a heated debate in Washington reveals China’s rise in status,” Mr. Lee said. “Washington’s hesitance has been already widely read in the region. This is a very poor signaling diplomacy coming from Washington to its allies and partners in the region.”

Despite its short-term economic issues, Beijing has invested deeply, financially and diplomatically, in long-term plans to dominate the region.

China keeps telling its Asian neighbors that it is their natural partner by geographic location and cultural commonality. It is trying to persuade them that the United States is a distant and declining power, with a broken political system, bound to lose its influence in Asia.

Read More on the Relations Between Asia and the U.S.

The Chinese Navy has steadily increased its patrols and military exercises in the South China Sea, sending more sophisticated ships. Its military aircraft have harassed warplanes of American allies in recent months. In May, Australia complained that a Chinese fighter jet dangerously intercepted one of its surveillance aircraft.

Given China’s economic and military might, allies want consultation with Washington, something they didn’t appear to get on Ms. Pelosi’s foray to Taiwan.

The foreign minister of Australia, Penny Wong, suggested this on Wednesday when she called on all sides, not only China, to back off.

“All parties should consider how they best contribute to de-escalating the current tensions, and we all want peace and stability in the Taiwan Strait,” Ms. Wong said.

Mr. Biden’s assurances on Asia in recent months had been comforting to nations facing China’s ire.

A favorite expression of that ire has been trade boycotts for what China considers bad behavior. Just hours after Ms. Pelosi’s arrival in Taiwan, China imposed economic measures on the island in retaliation.

Over the past two years, China has banned Australia’s exports of wine, lobsters and coal, after its government called for an international investigation into the origins of Covid-19, which first surfaced in China. The Chinese government still maintains economic sanctions on South Korea for allowing the United States in 2017 to deploy a missile defense system known as THAAD.

When the new South Korean leader, Yoon Suk-yeol, said recently that he might consider a second installment of the system, China threatened more sanctions.

The economic bans and China’s growing authoritarianism have hurt its standing in South Korea, where a record high of 80 percent of the population now holds negative views of the country, according to a recent study conducted by the Pew Research Center.

“China ranks first among South Korea’s most disliked countries,” said a retired general, Shin Won-sik, who is now a member of the National Assembly. “Around a decade ago, South Koreans had similar opinions toward China as they did the U.S.”

In response to the China threat, he said, South Korea and Japan, which have historically had frosty relations, have agreed for the first time to join with the United States to start trilateral military exercises.

Japan, one of the most enthusiastic supporters of Washington’s China strategy, has increased coordination with the United States on Taiwan. The defense ministry in Japan has also moved troops, antiaircraft artillery and surface-to-ship missile defense batteries to the country’s southern islands, some of which are close to Taiwan.

Public opinion in Japan has shifted decisively against China, and support for Taiwan has grown, presenting an opportunity for Washington to capitalize on closer relations between Japan and Taiwan. But Japan also wants to avoid any unnecessary new friction between the United States and China.

The trip was “totally not a strategic benefit for us,” said Ryo Sahashi, an associate professor at the University of Tokyo. “We strongly support Taiwan democracy and also we really appreciate U.S. efforts for Taiwan’s defense, including arms sales to Taiwan.”

“But this is totally different,” he added. “What we really want to see is a more quiet environment which really enables us, Japan and the United States, to enhance our security partnership with Taipei.”

Across the region, the United States has made strategic efforts to embrace the allies in a more cohesive coalition, with military and diplomatic underpinnings.

A year ago, Australia agreed to a landmark defense pact, known as AUKUS, with the United States and Britain, to acquire nuclear propulsion technology for the planned submarines.

In a visit last month to Australia, the chairman of the Joint Chiefs of Staff, Gen. Mark A. Milley, confirmed Washington’s policy of fortifying Australia with new weapons. “The Chinese military activity is noticeably and statistically more aggressive than in previous years,” Mr. Milley said during his visit.

Together with the United States, Australia is spending money and diplomatic capital to help counter growing Chinese influence in the Pacific islands, a strategically important area in the event of war with China.

It’s a complicated position to navigate. The economies of many of America’s allies in the region, including Japan, South Korea and Australia, depend heavily on China. About one-third of Australia’s exports go to China.

Despite bad diplomatic relations, Australia’s sales of iron ore, a main raw material for China’s industry, gained last year. Now, wine and coal exporters are trying to get their products back into the Chinese market.

There has been a flurry of high-level discussions to try to repair relations. The new Australian defense minister, Richard Marles, met with his Chinese counterpart, Wei Fenghe, in Singapore last month.

Ms. Wong met with Wang Yi, her Chinese counterpart, in Bali, ending a two-year diplomatic freeze. She has gone out of her way to say that China and Australia are not enemies.

As countries now brace for the fallout from Ms. Pelosi’s visit, the increased tensions between the two superpowers have ultimately raised questions about the authority of the American president.

“It doesn’t say much about Biden’s clout that he can’t prevail on the speaker from his own party,” said Alan Dupont, a former defense intelligence analyst for the Australian government, noting that the president had said the military did not think the visit was a good idea.

A previous speaker of the House, Newt Gingrich, visited Taiwan 25 years ago. But Mr. Gingrich was a Republican and President Bill Clinton was a Democrat, a political situation that made the trip more defensible. Mr. Gingrich visited China and met with its leader at the time, Jiang Zemin, before going to Taiwan, via Japan, an unthinkable schedule today.

China’s military was also far weaker back then, and was only beginning to modernize its forces, which now include a far stronger array of missiles and a vastly expanded navy.

Even in Australia, a democratic country with raucous politics, where people knew that Ms. Pelosi was a powerful figure, it was unfathomable that Mr. Biden did not persuade her to cancel, Mr. Dupont said.

“An unnecessary crisis,” he said. “An own goal, the U.S. put itself in this position.”

Asus recalls 10,000 Z690 Hero motherboards because of a backward capacitor
August 19, 2022
Live a Happier and Healthier Life With These 8 Leap Fitness Apps
August 19, 2022
The Easiest Ways to Make Your Home More Wheelchair-Accessible
August 19, 2022