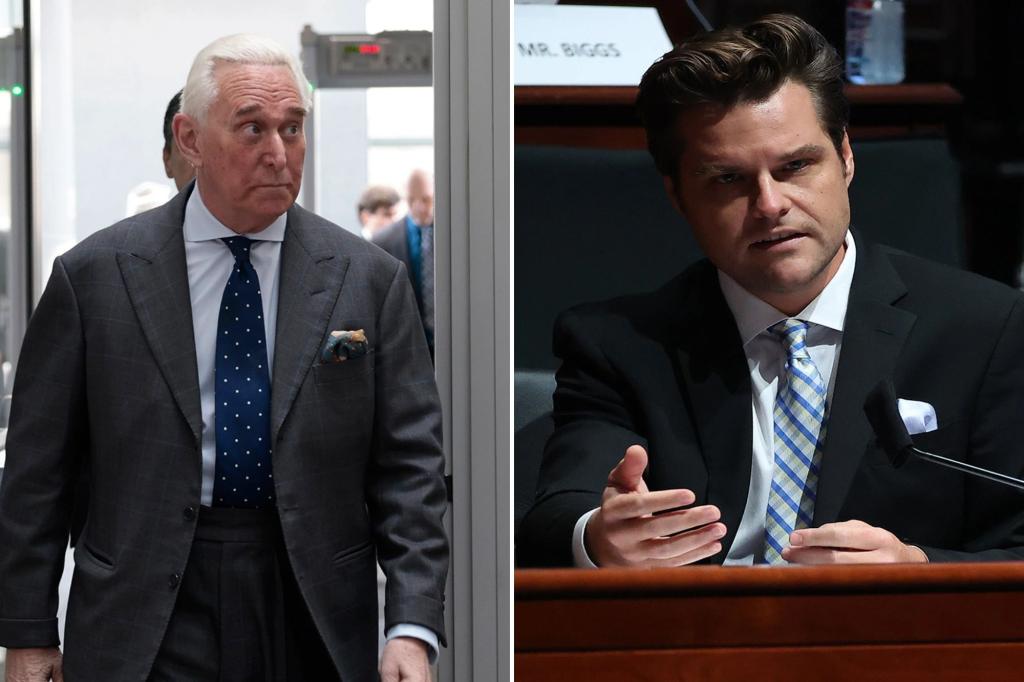 Rep. Matt Gaetz was caught on a hot mic telling Donald Trump adviser Roger Stone that the former president would pardon him if convicted for lying to Congress about Russian collusion.

The Florida Republican made the comments to Stone at Trump’s Doral Golf Course in October 2019 before his trial, according to audio obtained by The Washington Post.

“The boss still has a very favorable view of you,” Gaetz said, according to the recording. “I don’t think the big guy can let you go down for this.”

Stone was convicted of obstruction, making false statements, and witness tampering after being found to have lied about talking to WikiLeaks founder Julian Assange about emails from the Hillary Clinton campaign.

The emails were hacked by Russia before they were published in 2016. Trump and Stone said they didn’t have prior knowledge of the leaks, but were contradicted by other aides.

Stone was sentenced to three years in prison and subsequently granted clemency by Trump, who had commuted the bid before it began.

When Gaetz made the remarks to Stone, he was reportedly apparently unaware that they were being followed by a camera crew filming a documentary on the self-proclaimed “dirty trickster,” who cut his teeth working as an operative for former President Richard Nixon.

Gaetz did show restraint backstage at the event, which was being recorded for an online broadcast, according to the report.

“Since there are many, many recording devices around right now, I do not feel in a position to speak freely about the work I’ve already done on that subject,” he reportedly said of the potential pardon.

Gaetz also warned that special prosecutor Robert Mueller mentioned Stone “a lot” in his report on Russian interference in the 2016 contest, which he had special authority to preview as a member of the House Judiciary Committee, according to the outlet.

“They’re going to do you, because you’re not going to have a defense,” Gaetz said, according to the Washington Post.

Gaetz’s office told the newspaper that the congressman was not speaking for Trump when he made the comments and said the exchange was “illegally recorded” under Florida law, which says both parties have to consent to being recorded if they have a reasonable expectation of privacy.

The Danish director of the film countered that, saying “there is nothing illegal” about the recording and noting Gaetz’s comments about being surrounded by recording devices showed he didn’t have an expectation of privacy.

How to Locate All the Large Files on Your Windows PC