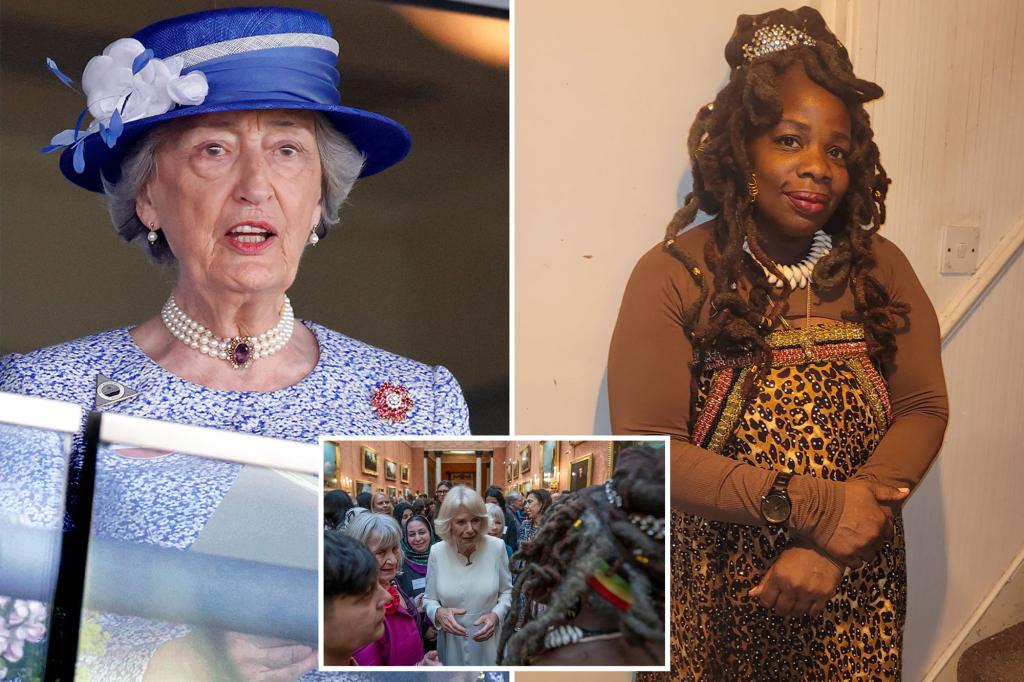 Lady Susan Hussey, 83, made the eyebrow-raising remarks to Ngozi Fulani, 61, during an event Tuesday to raise raise awareness about violence for women, according to The Sunday Times’ royal editor Roya Nikkah.

Fulani, who was attending the event on behalf of the charity Sistah Space, said Hussey — who was made lady of the household by King Charles III — approached her and questioned her about where she came from.

When she replied she was from Hackney, the royal aide allegedly continued to pester her, asking, “No, but what nationality are you?”

“I am born here and am British,” Fulani said she insisted again, recounting the conversation on Twitter.

But Hussey continued to probe, Fulani said, asking, “No but where do you really come from, where do your people come from?”

“Lady! I’m a British national, my parents came here in the 50s when…” Fulani said she replied, before Hussey interjected, “Oh, I knew we’d get there in the end, you’re Caribbean.”

“No, lady, I am of African heritage, Caribbean descent and British nationality,” Fulani said she shot back.

Hussey’s resignation came a few hours after Fulani, founder of Sistah Space, a London non-profit that provides domestic abuse services to women of African and Caribbean heritage, tweeted the alleged conversation and said she had “mixed feelings” about the event.

The activist only identified the staffer as “Lady SH” in the social media post.

Sistah Space later reaffirmed that it did not wish to “name and shame” the staffer in question, however, The Times confirmed it was Hussey.

“Some very serious questions for Buckingham Palace today,” he wrote.

Ship followed up his initial tweet to note that while Fulani said the event was “good” and that she met “awesome people,” it was marred by the “insulting conversation.”

A Buckingham Palace spokesperson acknowledged to The Times that “unacceptable and deeply regrettable comments” had been made.

“We have reached out to Ngozi Fulani on this matter, and are inviting her to discuss all elements of her experience in person if she wishes,” the spokesperson told the outlet.

“In the meantime, the individual concerned would like to express her profound apologies for the hurt caused and has stepped aside from her honorary role with immediate effect. All members of the household are being reminded of the diversity and inclusivity policies which they are required to uphold at all times.”

Buckingham Palace did not immediately respond to The Post’s request for a comment.

But the exchange could now overshadow Prince William’s arrival in Boston today, where he is expected to present the Earthshot Prize alongside wife Kate Middleton on Friday.

Also known as Baroness Hussey of North Bradley, Hussey, 83, is a longtime member of the royal household.

As Woman of the Bedchamber to the late Queen Elizabeth II, she accompanied the elderly royal to the funeral of Prince Philip in 2021.

She made headlines earlier this year, when journalist Tom Bower’s book “Revenge: Meghan, Harry and the War between the Windsors” claimed she predicted Prince Harry and Meghan Markle’s relationship would “all end in tears.”

Hussey is also a godmother of Prince William, now the Prince of Wales.

During the interview, Meghan, who is biracial, said she faced regular racist abuse from both the royal family and the press.

Among the bombshell claims, was that an unnamed “senior royal” questioned the skin color of their then-unborn first child, Archie.