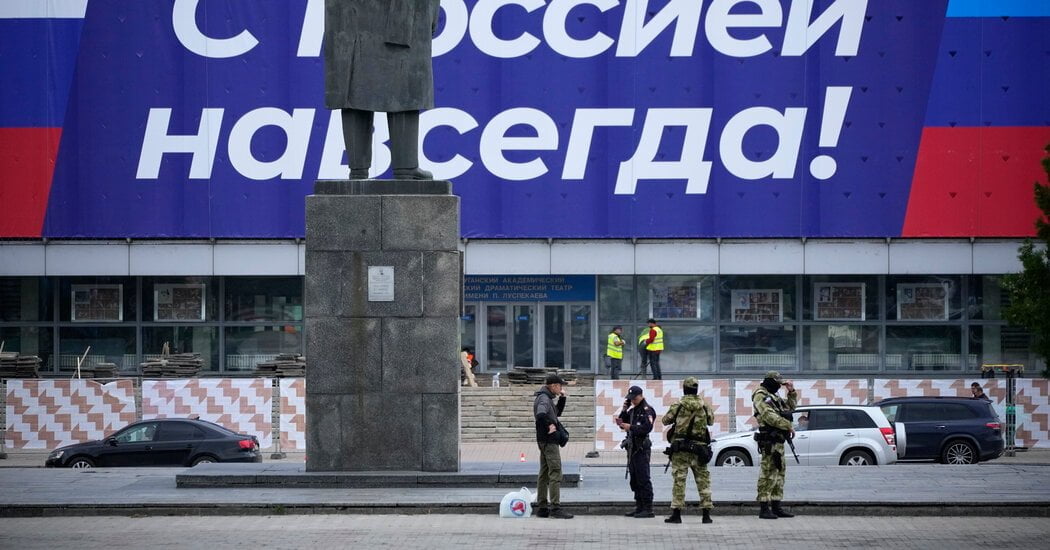 KYIV, Ukraine — In a display of pageantry intended to give Moscow’s land grab a veneer of legitimacy, Russian proxy officials in occupied areas of Ukraine appealed to President Vladimir V. Putin on Wednesday to annex the regions.

The annexation requests had an air of order and formality at odds with the chaos Russia’s leaders are facing both on the battlefield, where they continue to suffer losses, and at home, where tens of thousands of Russians are fleeing the country to avoid a military draft.

The requests from the Russian proxies followed sham referendums that ended on Tuesday in four regions in Ukraine and that, to no one’s surprise, purported to put voters’ stamp of approval on joining Russia. Many of the ballots were cast at the point of a gun, witnesses said.

One resident of the town of Berislav, in the Kherson region, scoffed at the notion of wanting to join Russia.

“When they first came to our town, they beat me up and took both of my cars,” the man, Pavlo, said of Russian soldiers. “And now they threatened that if I don’t vote they will evict me and my family from our apartment.”

Because of the threats, said Pavlo — who insisted that his surname not be made public for fear of retaliation — he voted in support of joining Russia.

The annexation push occurred as the European Union moved to impose new sanctions aimed at punishing Russia over its latest actions. The draft measures include an oil price cap, trade restrictions and blacklisting several individuals responsible for the referendums.

On Feb. 24, Russian forces rolled across the border and began laying waste to Ukrainian cities. But when it comes to annexation, Russian officials appear to want at least a patina of legality — even as most of the world condemns the referendums as patently unlawful.

As a practical matter, much of the territory Russia is moving to claim is not under its control, and the Ukrainian military is whittling away even more.

On Wednesday, Ukraine continued to reclaim more towns and villages in the east while pounding Russian positions in the south. Destroyed Russian tanks and the bodies of Russian soldiers littered the roadside outside the village of Oskil as Ukrainian soldiers pushed toward the strategically important city of Lyman.

But at least 200,000 Russians have left the country since Mr. Putin announced the partial military mobilization, according to figures provided by Russia’s neighbors.

Amid the setbacks on the battlefield, the Russian proxy officials in Ukraine, with the ostensible results of the referendums in hand, moved quickly to have Moscow incorporate the territories into Russia.

In two of the four provinces where voting was staged, Donetsk and Luhansk in the east, Moscow had established client states eight years ago. It was the leaders of those entities, whose legitimacy is not recognized by much of the world, who made the annexation requests.

Denis Pushilin, the leader of the Donetsk People’s Republic, said he would leave for Moscow with a document signed by members of an electoral commission showing results for use in the annexation process, according to Tass, the Russian news agency.

The leader of the Luhansk People’s Republic, Leonid Pasechnik, was also reported to be on his way to Moscow, and he posted a video online asking Mr. Putin to accept what he called the election results.

In the other two, Zaporizhzhia and Kherson in the south, puppet leaders declared independence from Ukraine in what they said was a first step toward being absorbed into Russia.

In Kherson, Volodymyr Saldo, the leader put in office by the occupying Russian Army last spring, appealed to Mr. Putin on Telegram, the messaging application, to accept the region as part of Russia.

If Russia follows the template laid down when it annexed the Crimean Peninsula from Ukraine in 2014, the Kremlin is expected to portray the local leaders installed by Russia’s military as independent representatives of Ukrainians there, and a choreographed process would follow.

The aim this time appears to be to declare parts of Ukraine as Russian territory and then assert that the Ukrainian Army is attacking Russia. Annexation would also provide a pretext for drafting Ukrainian men in occupied areas and forcing them to fight other Ukrainians.

By Wednesday evening, the process had advanced, Tass reported. The Russian-installed leaders of Donetsk and Luhansk had sent Mr. Putin formal requests to merge with Russia, the news agency said.

Mr. Putin could at any stage pause the process, possibly to open prospects for negotiation with the threat of annexation clearly on the table. If he does not, a next step would be submitting the appeals from the Russian proxy leaders for approval by both chambers of the Russian Parliament. There would be few surprises: Both houses consist entirely of members loyal to Mr. Putin.

So far, Mr. Putin has been coy about his plans. His spokesman, Dmitri S. Peskov, said the Russian leader traveled from the Black Sea resort of Sochi to Moscow on Wednesday but planned no public comment on the referendums.

Ukraine and its Western allies have dismissed Moscow’s moves as political theater and said they remained determined to drive Russian forces back over the internationally recognized borders of Ukraine.

“None of Russia’s criminal actions will change anything for Ukraine,” President Volodymyr Zelensky of Ukraine said in an address to the nation.

“The E.U. does not and will never recognize these illegal ‘referenda’ and their falsified outcome, nor any decision taken on the basis of this outcome, and urges all members of the United Nations to do the same,” the bloc said in a statement Wednesday.

In the two weeks since Ukraine drove Russia from towns and cities across the northeast Kharkiv region, its forces have steadily advanced farther south, breaking through the Russian defensive lines on the Oskil River.

Ukrainian units are making “slow advances on at least two axes east from the line of the Oskil and Seversky Donets River,” the British military intelligence agency said on Wednesday.

But even in retreat, Russian forces continued to unleash a furious barrage of artillery and missiles in towns and cities recently freed from occupation in the Kharkiv region.

A Russian cruise missile slammed into residential and commercial buildings in the city of Pervomaysk late Monday, killing eight, including a 15-year-old girl, according to Ukrainian officials.

Now you can get a really round Oura smart ring