Russian Troops in Belarus Spur Debate Over the Threat to Ukraine 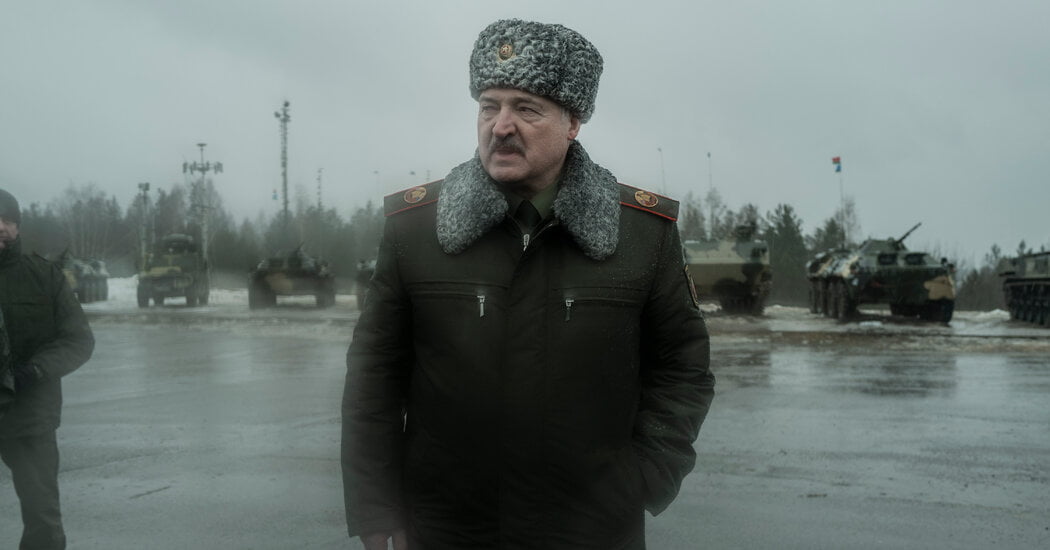 RIGA, Latvia — Russia is massing thousands of troops in its western neighbor Belarus, raising fears that Moscow might plan to open a new front in its war against Ukraine, but officials from Kyiv to Washington are casting doubt on whether the military buildup represents a serious threat.

With Russia already struggling to defend territory in eastern and southern Ukraine, it can ill afford to pick a new fight on a third front in the north on the border with Belarus, officials and analysts say.

“We have to be cautious, but I doubt that Russians are at this moment capable of opening another front line against Ukraine, at least not a successful front,” Latvia’s defense minister, Artis Pabriks said on Friday. He said some 10,000 of the Kremlin’s forces were gathering in Belarus, possibly to try to disrupt the flow of Western weapons into Ukraine from Poland.

“They might be able to disrupt something, but it would not be like in February” at the start of Russia’s military onslaught, said Mr. Pabriks, whose country is a NATO member bordering both Belarus and Russia, in an interview in Riga, the Latvian capital. “They are too weak now in my view.”

Britain’s Defense Ministry said in an intelligence assessment on Friday that the flurry of military activity in Belarus is “likely an attempt to demonstrate Russian-Belarussian solidarity and to convince Ukraine to divert forces to guard the northern border.”

Some Western officials say the Russian move is probably just a feint or a training mission, while others say it could be preparation for an attack, though likely not a very effective one, but their views come with a heavy dose of uncertainty.

Those who think a new offensive is possible say it probably would be aimed not at Kyiv, Ukraine’s capital — which the Russians failed to capture with a thrust out of Belarus at the outset of the invasion — but far to the west, near the border with Poland, to disrupt Western shipments of arms and other supplies.

But plunging into western Ukraine near the Polish border would be “very, very risky” for both Aleksandr G. Lukashenko, the strongman leader of Belarus, and for the Kremlin because the region is the traditional “heartland of Ukrainian nationalism,” said Valery Kavaleuski, a former Belarusian diplomat and now a foreign affairs adviser to his country’s exiled opposition movement. “It would be suicidal, a very bad idea but who knows what they might do,” he added.

Ukrainian forces, armed by the United States and others, have been on the offensive since early September, retaking ground the Russians had seized early in the war. Within the NATO alliance, which has closely monitored the ebb and flow of Moscow’s forces, many officials doubt that President Vladimir V. Putin’s military, battered and demoralized by nearly eight months of war, has the will or the means to open a new front.

On Friday there was heavy fighting in Luhansk Province in the east, and there have been signs that the Kremlin may abandon parts of Kherson Province in the south, which would mean the surrender of territory seized at the start of the war and which Mr. Putin last week declared part of the Russian Federation.

Also on Friday, the U.S. defense secretary, Lloyd J. Austin III, and his Russian counterpart, Sergei K. Shoigu, spoke with each other by phone for the first time since May and only the second time since the war began. Their respective offices confirmed in statements that the call took place and dealt with Ukraine, but did not offer any specifics or say whether Belarus was discussed.

Mr. Lukashenko, Belarus’s increasingly Moscow-dependent president, announced last week that his country and Russia were forming a new joint military force, with 70,000 Belarusian troops and up to 15,000 Russians, putatively to guard against NATO.

A Ukrainian general, Oleksiy Gromov, said on Thursday that the threat of a possible invasion from Belarus was growing. But Ukraine’s military intelligence agency does not see an immediate danger, a spokesman, Vadym Skibitsky, said in an interview on Friday.

Several thousand newly mobilized Russian soldiers are deployed in Belarus at training sites, Mr. Skibitsky said, but they are not accompanied by the tanks, artillery or fuel trucks and other logistical support they would need to invade and face Ukraine’s battle-hardened troops.

“We see these elements now moving into Belarus, but we do not see the movement of equipment,” he said.

Mr. Putin used the territory of Belarus, his closest military and political ally, as a staging ground for his February invasion and his forces have since launched missiles and drones into Ukraine from there. But Mr. Lukashenko has resisted Russian pressure to get more involved in the war.

But Michael R. Carpenter, the United States ambassador to the Organization for Security and Cooperation in Europe in Vienna, cautioned in a telephone interview that Russia and Belarus had both shrouded the purpose of their new joint force in an opaque fog that makes it “hard to say whether there is some sort of operation being prepared from Belarus or this is just an attempt to pin down Ukrainian troops.”

The British assessment said it was unlikely that Russia had actually deployed significant forces and added that Belarus “maintains minimal capability to undertake a complex operation.”

Air Force Brig. Gen. Patrick S. Ryder, a Pentagon spokesman, also played down the likelihood of a Russian invasion from Belarus: “We don’t currently have any indications of a potential imminent military action on that front,” he told a briefing Thursday.

Many Western and Ukrainian officials believe that Belarus’s primary role will be to help Russia train new draftees, many of whom have no military experience, before sending them to Ukraine.

Russia’s own training facilities have been stretched to the breaking point since Mr. Putin last month ordered the conscription of as many as 300,000 troops to prop up his faltering war effort. Some draftees have been dispatched to the front lines with minimal preparation; some have already been killed.

Mr. Lukashenko has held power for 28 years thanks to support from Moscow, while fending off a yearslong push by Mr. Putin to, in effect, merge their countries, ending Belarus’s independence.

“Lukashenko is trying to maneuver in an increasingly narrow space. Obviously Putin is trying to bring Belarus more into his war against Ukraine, but Lukashenko understands that would be the end of his time if he did this,” Mr. Pabriks said.

Mr. Lukashenko, he added, had become so dependent on Russia for his own political survival that “Russia controls his country and we should assume probably that there will be more involvement from the Belarusian side against the Ukrainians, but I very much doubt that this would bring large benefits to Russia.”

On a visit Thursday to the western region of Brest, near the border with Poland, Mr. Lukashenko inspected Belarusian-made drones and other military equipment, declaring that it would be “undesirable” for such equipment to be used in Ukraine, the state news agency Belta reported. He referred to Ukrainians as “our own people,” echoing Mr. Putin’s line that the people of Russia, Ukraine and Belarus are one Slavic nation divided by the machinations of the West.

Mr. Lukashenko, according to Belta, also said that Belarusians must ignore what he described as “wailing” about his government starting a clandestine mobilization drive, adding that it was necessary for troops to train “but no war today. We don’t need one.”

He made a similar statement in February just days before Russia invaded Ukraine from his territory.

On Friday, Ukraine’s armed forces said in a statement that if the country were attacked it would “respond as fiercely as we respond to all occupiers.” It also said that, in the event that troops from Belarus were ordered to attack, they should disobey their leaders and surrender.

Reporting was contributed by Andrew E. Kramer in Kyiv, Cassandra Vinograd in London and Tomas Dapkus in Vilnius, Lithuania.

Why Is My Fiddle Leaf Fig Have Yellowing Leaves?