Home » The Hunt Is On for ‘War Trophies’ in Ukraine
News

The Hunt Is On for ‘War Trophies’ in Ukraine 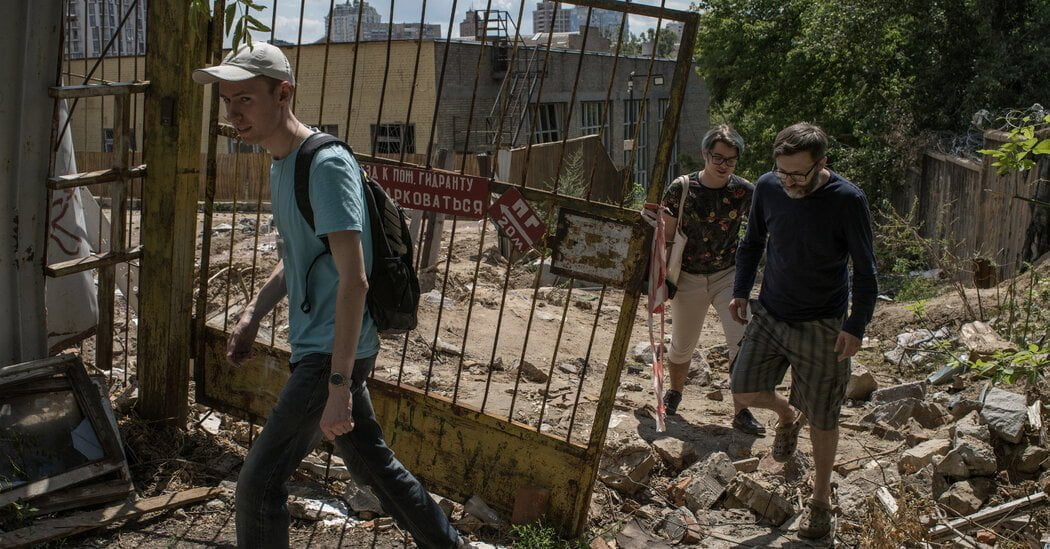 KYIV — When Ihor Sumliennyi, a young environmental activist, arrived at the site of a recent missile strike, the rubble had barely stopped smoking.

Police officers guarded the street. People who had lived in the smashed apartment building stared in disbelief, some making the sign of the cross next to him. He started poking around.

And then, bam! His eyes lit up. Right in front of him, lying near the sidewalk, was exactly what he was looking for: a mangled chunk of shrapnel, a piece of the actual Russian cruise missile that had slammed into the building.

He scooped it up, pricking himself in the process on the jagged steel edges, stuffed it in his backpack and briskly walked the hour home — “I didn’t want the police to stop me and think I was a terrorist.”

That ugly chunk of steel has now become the star of his “war trophies” collection, which spans everything from ammunition tins and a used rocket-propelled grenade shaft to a pair of black Russian boots he found in the battered city of Bucha.

“Those have really bad energy,” he said.

It might seem eccentric, even macabre, to collect war debris like this. But Mr. Sumliennyi isn’t the only one. Across Ukraine, many civilians and soldiers are foraging for shrapnel pieces, mortar fins, spent bullet casings and bits of bombs.

Ukrainian artists are weaving them into their work. Auction houses are moving discarded pieces of weapons and other battlefield finds, raising thousands of dollars for Ukrainian soldiers. One woman is even making sculptures from the uniforms of dead Russians.

It clearly speaks to something bigger. So many Ukrainians want to be on the front lines — or to somehow feel connected to the cause even if they are far from the fighting or don’t see themselves as cut out for combat. With patriotism cresting and their country’s existence at stake, they are seeking out something tangible they can hold in their hands that represents this enormous, overwhelming moment. They crave their own little piece of history.

“Each piece has a story,” said Serhii Petrov, a well-known artist working in Lviv. He’s now incorporating spent bullet cartridges into the masks he makes.

As he handled one, he mused, “Maybe it was someone’s last bullet.”

At a charity auction in Lviv on Sunday, Valentyn Lapotkov, a computer programmer, paid more than $500 for an empty missile tube that had been used, the auctioneers said, to blow up a Russian armored personnel carrier. He said that when he touched it he felt “close to our heroes.”

Memorializing the war, even when it’s likely far from over, is a way to show solidarity with the soldiers and those who have suffered. One of Kyiv’s biggest museums recently staged an exhibition of war artifacts collected since the Russians invaded in February. The rooms are full of gas masks, missile tubes and charred debris. The message is clear: See, this is what real war really looks like.

On a personal level, Mr. Sumliennyi is doing something similar. Thirty-one years old, he’s an auditor by training but a climate justice activist by heart. From Kyiv, he works with Greta Thunberg’s Fridays for Future movement, organizing social media campaigns against fossil fuels, and during the hundreds of video calls he makes, he shows off his war trophies. He also sends some out of the country with female activists to “go on tour” (he can’t travel himself, because of Ukraine’s ban on military-age men leaving the country).

“It’s very interesting,” explained Mr. Sumliennyi, who is tall and lean and lives in a tiny apartment with his mother. “You don’t feel the war through television or the news. But if you show people these pieces, they feel it.”

That’s exactly what one young Polish woman said after Mr. Sumliennyi leaned out of the frame during a video call and returned with his trophies.

“It was mind-blowing,” said the woman, Dominika Lasota, a climate justice activist from Warsaw. “I automatically started to laugh at it, in shock, but then realized how dystopian this moment was.”

“Ihor seemed to be all chill about it,” she added of Mr. Sumliennyi. “He actually showed that piece of the bomb with pride — he was smiling.”

It’s a coping mechanism, he explained. “Without black humor, we can’t live in the war,” he said. “It’s a protection reaction for the organism.”

Still, he and his friends handle the war objects carefully, almost as solemnly as soldiers would fold a flag for a fallen comrade.

“When I touch this,” he said of the missile piece he recovered in April, “I feel really bad energy in my fingers.”

He said he had spoken to weapons experts and determined the five-pound chunk was part of the tail of a Russian Kalibr cruise missile.

In Lviv, Tetiana Okhten helps run the UAID foundation, a volunteer network that, among the many things it’s doing, has sold more than 15 pieces of war debris, including several missile and rocket tubes used by the Ukrainian military that are big hits. All told, the war debris has netted more than $4,000, which the foundation spends on protective vests, medicine and other supplies for Ukrainian troops.

“We are taking things used to kill people to now save lives,” she said.

She said that one young Ukrainian soldier fighting in the Donbas region has been a huge help in finding things from the front lines. He has jumped out of trenches even as Russian shells were exploding around him and fellow soldiers were yelling at him to take cover. But, she said, he’s close to a bunch of volunteers and yells back, “I have to go. My friends need this stuff!”

In frontline areas, some shellshocked residents were surprised to learn that pieces of war debris were becoming collectors’ items.

“That’s crazy,” said Vova Hurzhyi, who lives in a Donbas town that the Russians keep attacking. “This stuff is coming here to kill you.”

Still, Mr. Sumliennyi keeps hunting. A few weeks ago, he and some environmentalist friends drove to Bucha, a Kyiv suburb where Russian troops slaughtered hundreds of civilians, to take photos for a social media campaign about the connection between fossil fuels and Russia’s war machine.

Just by chance, they stumbled into a backyard where they found a Russian military jacket and the pair of black boots (size 10). They remain among his prized items.

“We didn’t go to Bucha looking for this,” he said. “We just got lucky.”

Facebook reports drop in revenue for the first time

Love Island: Unwind With the Under-Eye Gels From the Show