The Spread of Book Banning 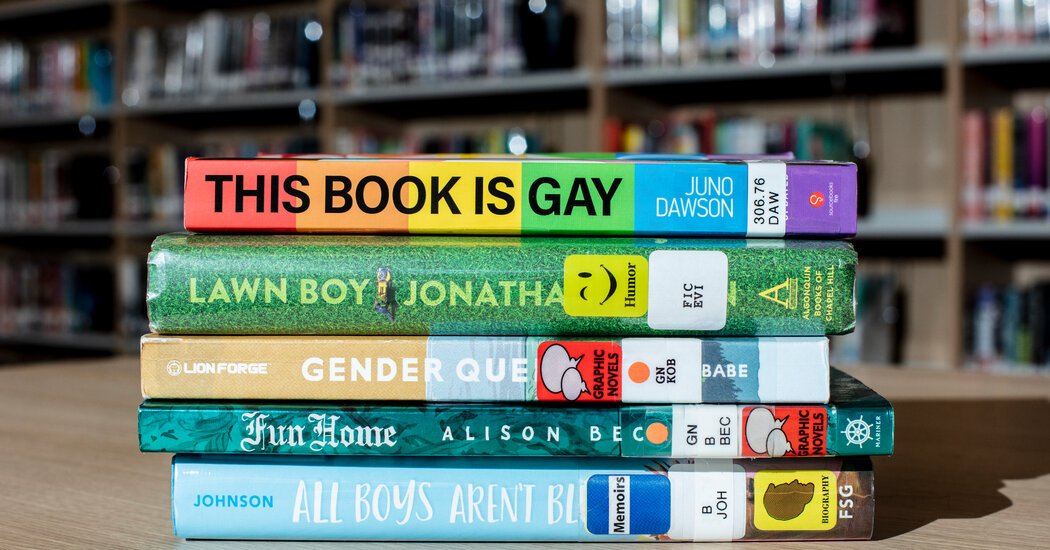 Book-banning attempts have grown in the U.S. over the past few years from relatively isolated battles to a broader effort aimed at works about sexual and racial identity. Alexandra Alter and Elizabeth Harris cover the publishing industry. I spoke to them about what’s behind this trend.

Claire: How did book-banning efforts become so widespread?

Alexandra: We’ve seen this going from a school or community issue to a really polarizing political issue. Before, parents might hear about a book because their child brought a copy home; now, complaints on social media about inappropriate material go viral, and that leads to more complaints in schools and libraries across the country.

Elected officials are also turning book banning into another wedge issue in the culture wars. Last fall, a Republican representative in Texas put together a list of 850 books that he argued were inappropriate material in schools and included books about sexuality, racism and American history. In Virginia, Gov. Glenn Youngkin campaigned on the issue by arguing that parents, not schools, should control what their children read. Democrats have also seized on the issue through congressional hearings about rising book bans.

And, sometimes, the disputes have spilled into something more menacing. The Proud Boys, the far-right group with a history of street fighting, showed up at a drag-queen-hosted story hour for families in a library in San Lorenzo, Calif.

Why do parents and conservatives want these bans?

Alexandra: For some parents, it’s about preventing kids from reading certain things. Others want to introduce certain topics — like L.G.B.T. rights or race — to their children themselves.

A lot of the people I’ve spoken to say they don’t consider the bans they want to be racist or bigoted. They say the books contain specific content that they feel isn’t appropriate for children, and they’ll sometimes point to explicit passages. But librarians we speak to say that the most challenged books around the country are basically all about Black or brown or L.G.B.T. characters.

In Texas, residents sued a library after a library official took books off the shelves based on a list from an elected official. They weren’t all children’s books; the list included Ta-Nehisi Coates’s “Between the World and Me” and “How to Be an Antiracist” by Ibram X. Kendi.

It’s hard to disentangle the banning surge from other conservative efforts to use the government to limit expression, including what critics call Florida’s “Don’t Say Gay” law. Those are all movements that have overlapped and spurred book-banning debates.

Elizabeth: Book banning is part of a wider political context right now, of extreme polarization, of heightened political tensions and the amplification of certain messages by the kinds of media — social or otherwise — that people consume.

Has any banning effort stood out to you?

Elizabeth: In Virginia Beach, a local politician sued Barnes & Noble over two books, “Gender Queer,” a memoir by Maia Kobabe, and “A Court of Mist and Fury,” a fantasy novel. This lawmaker wants Barnes & Noble to stop selling these titles to minors. The suit probably won’t succeed. But it’s an escalation: The issue went from people thinking their children shouldn’t read certain books to trying to stop other people’s children from reading certain books.

I understand why some of the fights over school reading are so intense: By definition, teachers are making choices about which books children are — and are not — going to read, and parents may not always agree. The efforts to take books from libraries feels different, yes?

Elizabeth: When people are trying to push a book out of the library, they’re making a decision for everyone, that nobody has access to a particular book. But librarians are trained to present a range of viewpoints. For them, it’s a matter of professional ethics to make sure that the point of view of one person or one group isn’t dictating what everyone reads.

Elizabeth: Book banning can also be damaging to kids who identify with story lines in books that are banned in their communities. The question for the child becomes, “What’s wrong with me?”

How are librarians responding?

Alexandra: It’s heartbreaking for them. Librarians say they got into this field because of a love of reading and talking to people about books. Some have left their jobs; some have been fired for refusing to remove books. Others quit after being subject to a barrage of insults on social media.

A librarian in Texas quit after 18 years because she was harassed online. She moved out of state and took a job in tech.

Elizabeth: The movement is not going away as long as the midterms are ahead of us. And the school year will start just as election season is really heating up, so both could add fuel to this fire.

The Sunday question: Should the U.S. agree to a prisoner swap with Russia?

Exchanging the notorious Russian weapons dealer Viktor Bout for the pro basketball star Brittney Griner would be an act of compassion, Douglas Farah argues in Politico. But swapping Bout for Griner and Paul Whelan, another American held in Russia, would encourage U.S. adversaries to kidnap other Americans abroad, Rob “Zach” Zachariasiewicz writes in USA Today.

Khloé Kardashian REACTS to Tristan Thompson PDA With Another Woman