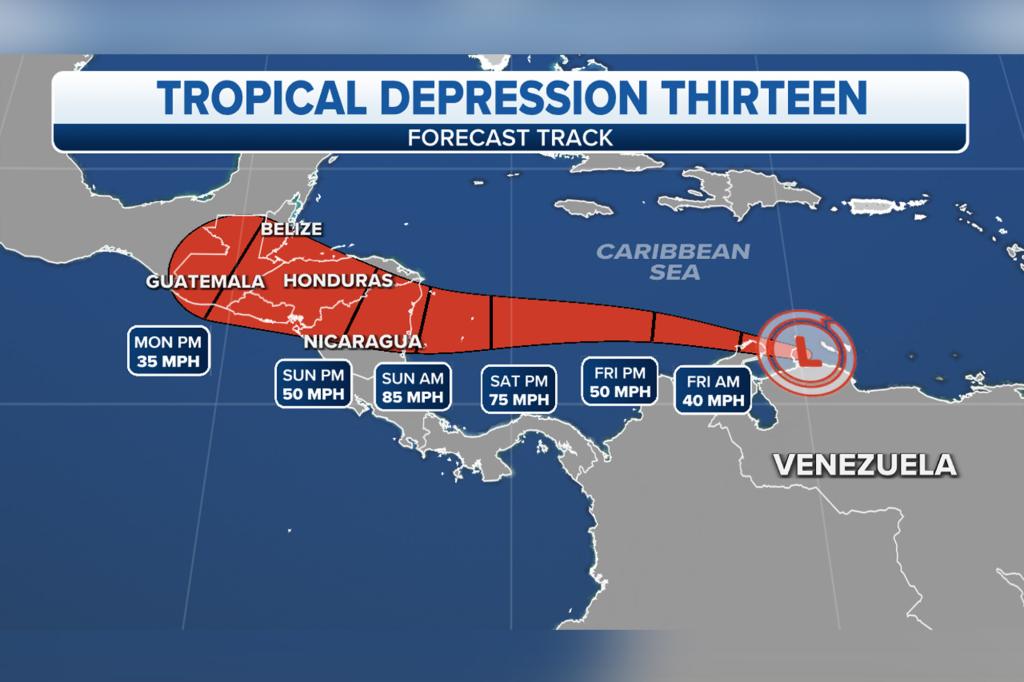 Hurricane watches have been issued for small islands off the coast of Nicaragua as Tropical Depression 13 in the southern Caribbean Sea near the coast of South America looks to gain strength in the coming days and eventually threaten Central America with hurricane-force winds.

Tropical Depression 13 is expected to organize into a tropical storm on Friday and then a hurricane over the weekend as it heads towards the coast of Nicaragua and Honduras.

Once this system’s winds reach at least 39 mph, it will be named Tropical Storm Julia, making it the 10th named tropical cyclone in the Atlantic basin this season. It will then become a hurricane if its winds reach at least 74 mph, which the NHC expects to happen by Sunday as it approaches Central America.

Where is Tropical Depression 13?

Tropical Depression 13 is centered about 60 miles south-southeast of Curaçao in the so-called ABC island chain.

This system still has maximum sustained winds of 35 mph and is moving westward at about 15 mph.

What is the forecast for Tropical Depression 13?

Tropical Depression 13 is forecast to organize into a tropical storm on Friday and a hurricane by Sunday as it approaches the coast of Nicaragua. It will be called “Julia” once the NHC officially declares it a tropical storm.

A tropical storm is a tropical cyclone with maximum sustained winds between 39 and 73 mph. The NHC assigns names to tropical storms using the official name list for that season developed by the World Meteorological Organization.

According to the FOX Forecast Center, the system is expected to move near the so-called ABC island chain of Aruba, Bonaire and Curaçao, the coast of northwestern Venezuela and the Guajira Peninsula of Colombia through Friday morning. The system is then predicted to move across the southwestern Caribbean Sea and approach the coast of Nicaragua on Sunday.

“By Sunday morning, we could be tracking our next hurricane in the Caribbean. That would then slam into places like Nicaragua, over toward places like Costa Rica,” FOX Weather meteorologist Michael Estime said. “Keep in mind, if it takes a more southerly trajectory, Costa Rica would certainly be in line for this, and then, of course, Honduras.”

Where are watches and warnings in effect?

The government of Colombia has issued a Hurricane Watch for San Andres, Providencia and the Santa Catalina Islands. Meanwhile, Tropical Storm Warnings are in effect for the coast of Colombia from the Colombia/Venezuela border westward to Riohacha, a city in northern Colombia where the Ranchería River meets the Caribbean Sea.

A Hurricane Watch means hurricane-force winds (74-mph plus) are possible in the area within the next 48 hours.

A Tropical Storm Warning means that tropical-storm-force winds (39-plus mph) are expected somewhere in the warning area – in this case, within the next 24 hours.

Interests in the Colombian islands of San Andres and Providencia and along the coasts of Nicaragua and Honduras should monitor the progress of Potential Tropical Cyclone Thirteen. Additional watches or warnings will likely be issued later Thursday or on Friday.

What are the impacts from the system?

The cyclone is expected to bring tropical-storm-force winds (39-plus mph) to the coast of Colombia within the Tropical Storm Warning area by early Friday.

Additionally, between 3 and 6 inches of rain is predicted along the northern coast of Venezuela, the ABC island chain, the Guajira Peninsula of Colombia and central Nicaragua. Isolated amounts as high as 10 inches are possible.

As much as 6 to 12 inches of rain is forecast on the Colombian islands of San Andres and Providencia. Between 6 and 10 inches is possible in eastern Nicaragua, with localized totals up to 16 inches in some areas.

Will Tropical Depression 13 threaten the US?

A blocking high-pressure system is forecast to remain in place north of the cyclone as it tracks across the Caribbean.

Therefore, the FOX Forecast Center believes the system will keep heading west into the south-central and southwestern Caribbean Sea rather than turn north toward the US, sending it on a path through Central America late this weekend and into early next week.

The computer forecast model tracks for Potential Tropical Cyclone Thirteen are shown on the map below. 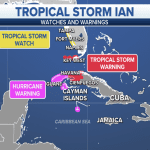 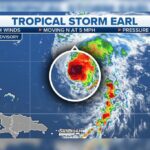 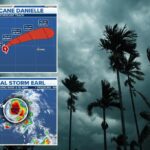 GPOD on the Road: Garden Tour With Cherry

Chinese state TV cuts shots of mask-free World Cup fans
4 mins ago
What to Do When Your Kid Starts Tattling That Santa...
13 mins ago
Russia Fortifies Defenses in Southern Ukraine, Analysts Say
1 hour ago