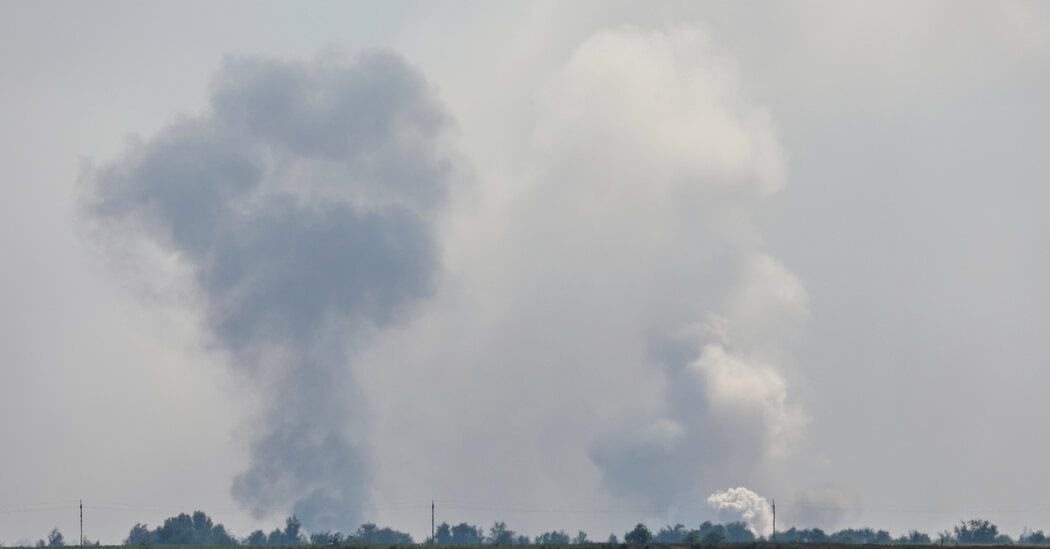 ODESA, Ukraine — Russian warships patrol Crimea’s coasts and Russian warplanes fly from its territory, transformed by eight years of occupation into a fortress. President Vladimir V. Putin has called Crimea a “sacred place,” Russia’s “holy land,” and one of his top advisers has warned that if the peninsula were attacked, Ukraine would face “Judgment Day.”

But lately, Ukraine has been calling the Kremlin’s bluff. Huge explosions rocked a temporary Russian ammunition depot in Crimea on Tuesday, in the latest in a series of clandestine Ukrainian assaults against the Black Sea peninsula that Mr. Putin illegally annexed in 2014, and that is now being used as a vital staging ground for Russia’s invasion.

A senior Ukrainian official, speaking on the condition of anonymity to discuss the operation, said that an elite Ukrainian military unit operating behind enemy lines was responsible for the blasts. Russia’s Defense Ministry said in a statement that the episode was an “act of sabotage,” a significant acknowledgment that the war is spreading to what the Kremlin considers Russian territory.

The attacks in Crimea underscore Ukraine’s increasingly aggressive military tactics, as the government in Kyiv leans on long-range Western weapons and special forces to strike deep behind the front, disrupt Russian supply lines and counter Russia’s advantages in matériel. They also represent a growing challenge to Mr. Putin, with Crimea’s security key to Russia’s military effort — and to Mr. Putin’s political standing at home.

No single action that Mr. Putin has taken in his 22-year rule provoked as much pro-Kremlin euphoria among Russians as his largely bloodless annexation of Crimea, an action that cemented his image as a leader resurrecting Russia as a great power.

And in the run-up to the full-scale invasion last winter, it was Crimea that Mr. Putin repeatedly cited as the locus of what he called an existential security threat posed by Ukraine, warning that a Western-backed Ukrainian effort to retake the peninsula by force could trigger a direct war between Russia and NATO.

Until this month, Crimea appeared well protected from Ukrainian attacks. Even Ukraine’s most advanced weapons systems do not have the range to hit military targets there, and its planes are incapable of penetrating Russian air defenses on the peninsula.

But in recent weeks, explosions have erupted on the peninsula repeatedly. And on July 31, Russia canceled its Navy Day celebrations in the Crimean port city of Sevastopol after an attack by a makeshift drone injured six.

Last week, a series of blasts at a military airfield in southern Crimea wiped out a good portion of the air power and munitions stores of the Black Sea fleet’s 43rd naval aviation regiment, and sent beachgoers rushing for cover. That attack, according to a Ukrainian official, was carried out in part by special forces officers working with local partisan fighters.

In the attack on Tuesday, at least two civilians were wounded, and power lines, railroad tracks and homes were damaged in multiple detonations, in the village of Mayskoye, Russian officials said. As many as 3,000 people were evacuated from the area, and local residents in Crimea said that the authorities there had introduced a “yellow level terrorist threat” alert, searching people as they entered parks and public buildings.

An analysis by The New York Times of several photos and videos shows a large fire burning west of Mayske, on Tuesday, and a satellite image shows smoke rising from the same site. Videos taken by passers-by before the explosions and verified by The Times show military vehicles parked in the nearby village, including what appear to be mobile multiple rocket launchers emblazoned with the ‘Z’ Russia uses to identify its forces.

About 11 miles from the location of the explosions, a transformer substation in the town of Dzhankoi was also on fire. The cause was not evident, but it is near another site where hundreds of Russian military vehicles were filmed in the weeks before.

Even before those explosions, there were signs that people on the peninsula, a popular vacation spot, were either being moved or were feeling unsettled enough to leave. A record 38,000 cars on Monday drove in both directions across the 12-mile bridge linking Crimea and Russia, the state news agency Tass reported.

“The queue these days to leave Crimea for Russia across the bridge proves that the absolute majority of citizens of the terrorist state already understand or at least feel that Crimea is not a place for them,” President Volodymyr Zelensky of Ukraine said in his nightly address.

Ukraine’s leaders have not publicly claimed responsibility for any of the recent blasts, holding to a policy of official ambiguity about attacks far behind the front lines. But Mr. Zelensky and one of his advisers, Mykhailo Podolyak, appeared to hint at Ukrainian involvement.

“A reminder: Crimea of normal country is about the Black Sea, mountains, recreation and tourism, but Crimea occupied by Russians is about warehouses explosions and high risk of death for invaders and thieves,” Mr. Podolyak wrote on Twitter. “Demilitarization in action.”

Mr. Zelensky praised those helping Ukraine’s intelligence services and special forces, and warned civilians in Russian-held territory to stay away from Russian military installations. “The reasons for the explosions in the occupied territory can be different, very different,” he said, but they all result in damage to Russia’s military.

After Mr. Putin launched his full-scale invasion of Ukraine on Feb. 24, Russian forces lunged north from Crimea and quickly captured a large swath of territory in southern Ukraine, including the Kherson region, which Russian forces almost fully control. Russia is now using Crimea to funnel troops and supplies, and provide air and logistics support to its forces in Kherson and the neighboring Zaporizka region, where Ukraine has been attacking Russian supply lines and threatening a major counteroffensive.

Pavel Luzin, an independent Russian military analyst, said that “Russia’s possibilities on the battlefield are being limited” by Ukraine’s attacks in Crimea.

“It cannot seize the initiative, because there are not enough resources,” he said of the Russian military. “Crimea is the only way to support the grouping of troops in the Kherson and Zaporizka regions. Otherwise, this grouping of troops does not exist.”

Now the question is how Russia responds to the attacks. In April, Russia’s Defense Ministry warned that it would retaliate against future Ukrainian strikes on Russian territory by targeting “decision-making centers” in the capital, Kyiv.

In July, Dmitri A. Medvedev, the vice chairman of Mr. Putin’s security council and former president, said that in the event of an attack from Ukraine against Crimea, “Judgment Day will come for all of them over there at the same time.”

After Tuesday’s blasts, some pro-Kremlin commentators were calling on the military to make good on those threats. Andrei Klishas, a senior lawmaker from Mr. Putin’s United Russia party, said in a social media post that “Russia’s retaliatory strikes must be very convincing.”

“This is about protecting our sovereignty,” he wrote.

But Mr. Putin, who addressed a security conference in Moscow by video link on Tuesday a few hours after the early-morning blasts in Crimea, made no mention of the attack. He said Russia was prepared for a lengthy war, even if many more Ukrainians would die, repeating his frequent argument that a Western-allied Ukraine was an existential threat to Russia. The West, he claimed in his speech, was using Ukrainians as “cannon fodder” in its conflict with Russia.

“The situation in Ukraine shows that the United States is trying to draw out this conflict,” he said.

With little movement on the battlefield in the last month, the Kremlin has tried to cement its control over occupied territories, attempting to repeat the illegal annexation process it performed in Crimea in 2014, according to Western analysts. Russian forces and their proxies have arrested hundreds, doled out Russian passports, replaced the currency with rubles and rerouted the internet through Russian servers — putting pressure on Ukraine to disrupt that work.

Two explosions in the occupied city of Melitopol knocked out pro-Kremlin television broadcasts on Tuesday, according to the city’s deposed Ukrainian mayor, Ivan Federov. Details about the blasts could not be independently confirmed, and it was not immediately clear who was responsible. But Mr. Federov said the episode emphasized that opposition to the Russian-installed authorities would continue.

“The people of Melitopol are holding out and the resistance forces are neutralizing everything” that the Kremlin-backed regime has imposed, he said.

In addition to reinforcing and defending their positions in southern Ukraine, Russian forces have continued to barrage Ukrainian towns, cities and defensive positions across hundreds of miles in northern and eastern Ukraine.

In the northeastern city of Kharkiv, Russian shells exploded on roads, hit infrastructure and destroyed other buildings in five of the city’s nine districts, according to Ihor Terekhov, the city’s mayor.

He said it had been “a long time” since Russian forces had hit so many different parts of the city at once. The number of casualties was still being assessed. 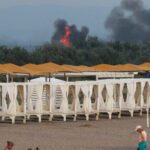