Home » ‘We Survived Another Night’: In Ruined Suburb, Solace in a Small Community
News

‘We Survived Another Night’: In Ruined Suburb, Solace in a Small Community 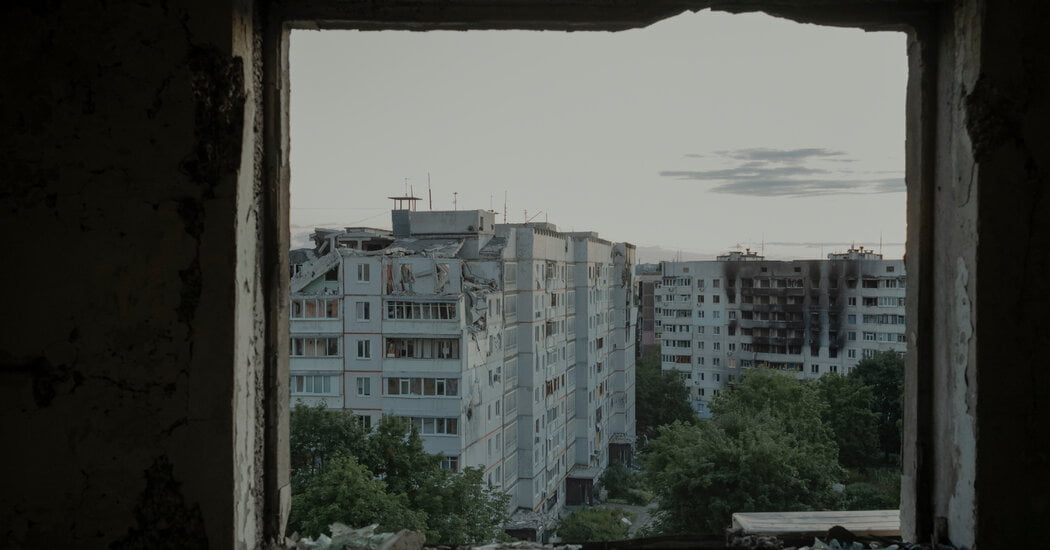 SALTIVKA, Ukraine — On a recent Saturday morning, Yevhenia Botiyeva weeded the flower bed outside her apartment building, a routine she has taken on since she returned home in late spring.

She worked methodically, seemingly unbothered by the apocalyptic landscape of burned buildings, shattered windows and the occasional thud of artillery that surrounded her.

Her husband, Nikolai Kucher, who had survived Covid-19 and a heart attack and now had cancer, would emerge soon from their first-floor apartment to build a wood fire to heat water in a blackened kettle for coffee. But for now it was just Ms. Botiyeva, 82, tending to the overgrown lilies.

It was an oddly cozy scene for a war zone — a testament to how even the threatening and surreal starts to feel normal given enough time.

“Tea or coffee?” Ms. Botiyeva offered, pouring hot water from a plastic thermos as she sat at a folding kitchen table placed outside the building. A vase filled with orange lilies and deep yellow heliopsis paid homage to a picture of the Virgin Mary affixed to a nearby wall by the building’s entrance.

“The mother of God protects us,” she said serenely, urging her guests to try their “wartime sweets” — salty crackers topped with creamy honey spooned from a jar.

Planned in the 1960s as a bedroom community on the outskirts of Kharkiv, Ukraine’s second-biggest city, Saltivka was once a district of half a million people. Now in largely abandoned apartment blocks which once held thousands of people, there are merely dozens.

Ms. Botiyeva, a retired ophthalmologist and her husband, a retired engineer, said they preferred to endure the hardship rather than join the millions of displaced Ukrainians relying on the kindness of strangers while they wait out the war. In the process, they have created a community with the others who have stayed behind.

Every visible building has scorched walls and shattered windows. The shops that are still standing have been boarded up. Nearby, an apron and other pieces of clothing hang from the upper branches of a tree, swept there by an explosion, according to the residents.

The playgrounds are deserted — families with children have fled.

There is no running water, no heat and no safety from continuing Russian attacks.

But few residents leave the apartment complex since most of the suburb is so heavily damaged and there are no buses running — and the nearest grocery store is now an hour’s walk away.

A message scrawled on an abandoned van blocking part of the road to the apartment complexes warns there is no civilian access to the area. That security ban, imposed during the worst of the shelling, has now been lifted. For the most part, however, only security forces and volunteers delivering food come here.

“We survived another night,” Halyna Zakusova, a neighbor, said while hugging Ms. Botiyeva after emerging from the sixth-floor apartment she shares with her son.

Ms. Zakusova, 65, sat at the outdoor table and stroked a black and white cat, Musa, that had jumped into her arms.

The two women, casual acquaintances before the war, have become friends. Ms. Zakusova, a retired city employee, moved into the building 31 years ago in the chaotic collapse of the Soviet Union.

Because their apartment building — number 25 — is on the edge of the complex, the police and volunteers drop donated food nearby and the residents distribute it to neighboring buildings.

“We take what we need and we give the rest to other people. When we don’t have something, we can go to them,” Ms. Botiyeva said. “Life is like a boomerang: how you want to be treated you should treat other people, even people you don’t know.”

The two women meet every day for coffee, Ms. Botiyeva said, and when they make something nice, they share it. A few days ago, Ms. Botiyeva made cherry vareniki: dumplings filled with sour cherries gathered from a nearby tree, cooked over a hot plate.

Outside the next apartment block, another woman, Larysa, sat at a battered wooden table pitting cherries to add sugar to and freeze for the winter. “They have vitamin C,” Larysa said. Suspicious of foreign visitors, she did not want to give her last name.

“Some of our neighbors left for abroad, some went to western Ukraine and some went to other regions,” said Lyudmyla, 67, a retired accountant sitting next to her. “Those who had no money stayed here.”

Lyudmyla showed off the fruit trees she planted when she first moved into the building in 1991. She also declined to give her last name for privacy reasons but handed out handful after handful of tart cherries.

Nearby the cherry trees, there are apricot, walnut and apple trees.

There are also flowers “for the soul,” said Mr. Kucher, Ms. Botiyeva’s husband.

In addition to packaged food, the police drop off donated dog and cat food for abandoned pets. Outside Building 25, a few minutes after a stray tabby cat finished eating from a bowl of dried food, two pigeons stepped up to finish off the rest.

Every other day, Ms. Zakusova’s son, Oleksandr Ihnatenko, 37, trudges out to the edge of the complex with a bucket of grain to feed dozens of racing pigeons in a two-story pigeon coop for an absent neighbor.

Ukrainian artillery aimed at Russian forces thuds in the background. After Russia failed to capture Kharkiv in the invasion in February, Ukrainian forces pushed them back — in some places back to the Russian border. But Ukraine’s second biggest city is of such strategic importance that Russia is expected to eventually launch another all-out assault for it.

After the terror of the early days when they huddled in the basement, the remaining residents have become experts at recognizing frightening noises, Ms. Botiyeva said.

“At first you’re scared, you’re confused, you cannot accept the situation,” she said. “Now we understand what is outgoing, what is incoming. We are not afraid of every sound. Now we have experience. But it is better not to have this experience.”

Mr. Kucher said they wore out their welcome. His wife gave a more ethereal reason for coming back.

Ms. Zakusova and her son stayed through the winter despite the subzero temperatures. She said they poured boiling water into hot-water bottles and burrowed under piles of blankets to keep warm.

As the summer goes on, and with what might be a bigger Russian offensive looming, peace seems elusive.

“We thought we would be a generation that would not know war,” Ms. Zakusova said. Her mother, 88, survived World War II but is now trapped in a village in the Russian-occupied Kherson region.

“We can’t reach her by phone, we can’t go there,” she said. “We have no idea what’s going on. Does she have food? Does she have medicine?”

Ms. Zakusova said if the war was still raging when winter came, she planned to go find her mother and stay with her. Her son would remain behind.

“He will survive, but my mother won’t,” she said.

“It will be all right,” she said, not just with conviction but also with a remarkable serenity considering all the hardships she had faced and were likely still to come. “We will be all right.”