Home » Your Monday Briefing: Civilians in Donetsk Are Urged to Evacuate
News

Your Monday Briefing: Civilians in Donetsk Are Urged to Evacuate 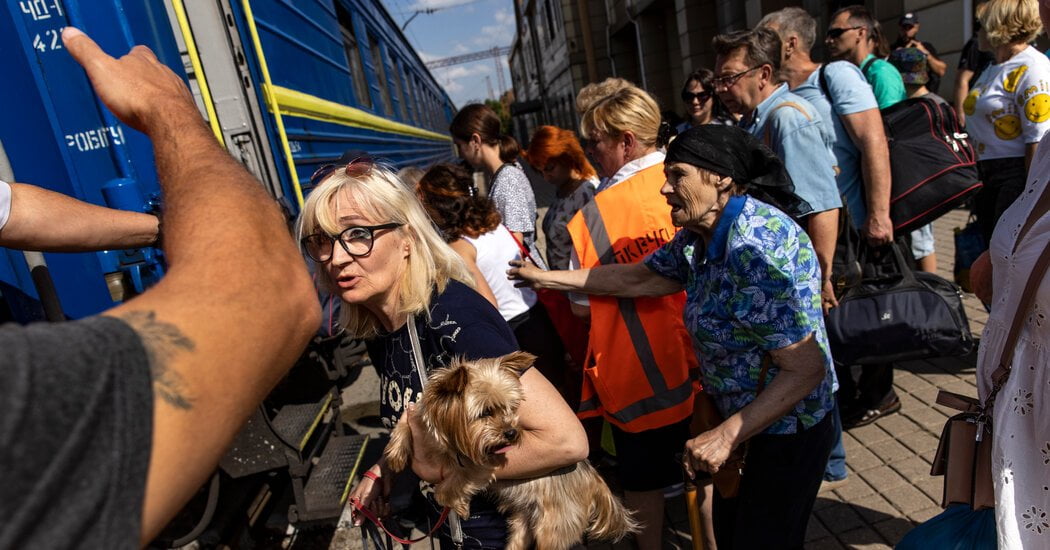 Zelensky urges civilians in the east to evacuate

President Volodymyr Zelensky of Ukraine ordered hundreds of thousands of civilians living in Donetsk province to evacuate their homes after months of relentless Russian bombardment.

The call to leave, as Russian shelling continues to kill civilians, is the first time the Ukrainian government has issued such a broad directive. By doing so before winter, it was seeking to give people time to move and to prevent an unmanageable crisis later.

“The sooner it is done, the more people leave Donetsk region now, the fewer people the Russian Army will have time to kill,” he said of evacuation.

Russia’s plan: In Russian-occupied regions of Ukraine, local leaders are forcing civilians to accept Russian rule and arresting those who resist. Next comes President Vladimir Putin’s 21st-century version of a war of conquest: the grass roots “referendum.”

Victims of the war: One of Ukraine’s richest businessmen, Oleksiy Vadaturskyi, and his wife were killed during shelling of the port city of Mykolaiv.

House Speaker Nancy Pelosi is expected to attend a cocktail reception in Singapore later today. It was an opening stop on her closely watched tour of Asia that has jangled nerves in both Washington and Beijing over the possibility of a stop in Taiwan.

Plans during Pelosi’s trip have remained almost entirely secret. But on Sunday she confirmed that she would be accompanied by a small congressional delegation on visits to Singapore, Malaysia, South Korea and Japan to “focus on mutual security, economic partnership and democratic governance in the Indo-Pacific region.” Her office said nothing, however, about any plans to visit Taiwan.

While it remains unclear exactly how China would react to such a stop, the Chinese military announced that it would conduct drills on Saturday with live ammunition in the waters off southeastern Fujian province, about 80 miles from Taiwan. On Sunday, a spokesman for the Chinese air force said that the country’s fighter jets flew around Taiwan to enhance the ability to defend territorial integrity.

Quotable: Asked recently by reporters about a potential Pelosi visit to Taiwan, President Biden said that “the military thinks it’s not a good idea right now.”

Backdrop: Taiwan is the biggest flashpoint in U.S.-China relations. In June, Beijing raised the stakes by declaring jurisdiction over the Taiwan Strait. Here’s a look at the issues around Pelosi’s proposed trip.

Beginning in 2018 with the election of Andrés Manuel López Obrador in Mexico, Latin American politics have been hurtling to the left. Soon, each of the region’s six largest economies could be run by leaders elected on leftist platforms.

But those leaders — often thrust into power by anti-incumbent fervor and anger over chronic poverty — face bleak global conditions that could upend their campaign pledges. A European war has sent the cost of everyday goods soaring, making life more painful for already suffering constituents and evaporating much of the good will presidents once enjoyed.

In Argentina, where Alberto Fernández took the reins from a right-wing president in late 2019, protesters have taken to the streets amid rising prices. Chile’s Gabriel Boric, who took office in March, has seen his approval ratings plummet, as the country recorded its highest inflation in more than a generation.

In the region: Guatemalan authorities arrested an award-winning journalist and raided the offices of the newspaper he founded, the latest sign of growing political repression against attempts to expose graft in Guatemala’s government.

The Rev. Tomasz Kancelarczyk tries to dissuade Polish women from abortion, which has been banned in the country for nearly 30 years but remains common. He says his most effective tool is something the state has mostly neglected: helping single mothers by providing shelter, food vouchers and lawyers to go after violent partners.

Lives Lived: Fidel Ramos, a former president of the Philippines, was considered a ruthless henchman of Ferdinand Marcos until he broke with the dictator and led the country through an economic boom. He died Sunday in Manila at 94.

It’s all on television

In South Korea, where taboos about seeking mental health treatment have deep roots, the psychiatrist Dr. Oh Eun-young has destigmatized therapy and become famous by taking an unusual path: She broadcasts her appointments on television.

The latest iteration of her show, “My Golden Kids,” launched in 2020 and is now one of the most popular reality programs in South Korea. The show’s success — along with a portfolio of books, videos and lectures over the last two decades — has earned Dr. Oh the nickname the “god of parenting.”

In South Korea, only one in 55 adults received treatment in 2021, compared with one in five in America. South Koreans attest to Dr. Oh’s role in destigmatizing psychiatric treatment, and the fact that some are willing to share their struggles on her shows is a watershed cultural moment. Practitioners say that persuading South Koreans to get therapy or take medication is becoming easier.

“She is the mother that you wish that you would have had in your childhood,” said Dr. Yesie Yoon, a Korean American psychiatrist.

Get a Lifetime Microsoft Windows 10 License for $14, Office for $26