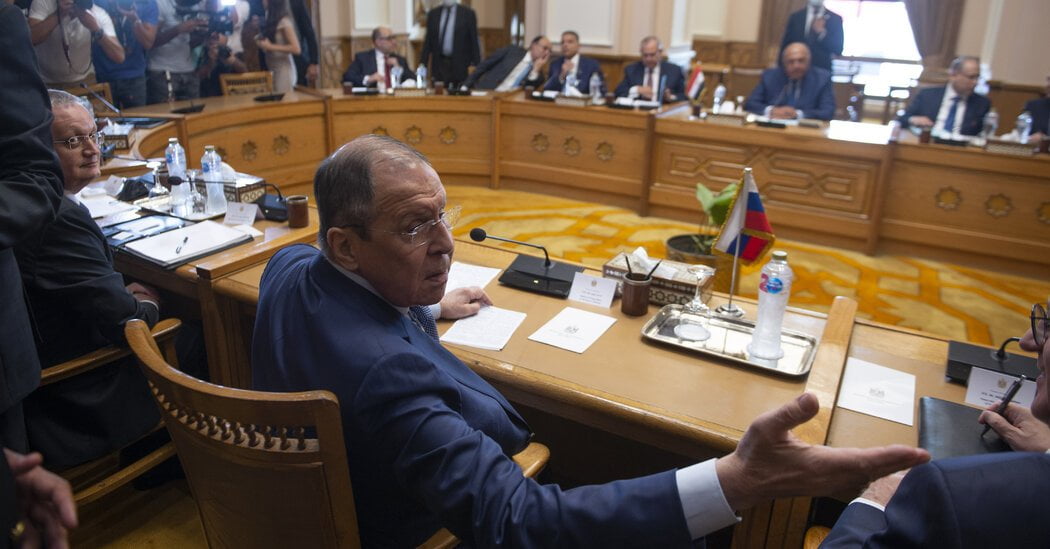 We’re covering Russia’s campaign to garner support in Africa and the W.H.O.’s decision to declare monkeypox a global emergency.

Russia’s top diplomat, Sergey Lavrov, set off on a tour of four African countries — Egypt, Ethiopia, Uganda and the Republic of Congo — seeking to place blame on the West for war-related grain shortages that have sparked fears of famine.

He is likely to find a receptive audience in a region that has sought to maintain access to Russian exports despite pressure from the West. Seeing no gain in alienating either side, several African countries have tried to simply stay out of the conflict.

The global grain shortage caused by the war appeared likely to ease on Friday when Russia agreed to a deal brokered by the U.N. and Turkey allowing Ukraine to export its grain. The next morning, however, Russian missiles hit Ukraine’s port of Odesa, raising questions about Moscow’s intention to stick to the agreement.

News from the war in Ukraine:

The World Health Organization over the weekend labeled monkeypox — which has spread in just a few weeks to 75 countries and infected more than 16,000 people — a global health emergency.

Dr. Tedros Adhanom Ghebreyesus, the W.H.O.’s director general, overruled a panel of advisers, who could not come to a consensus, to declare a “public health emergency of international concern.” That distinction, which has been used seven times in the last 15 years, is currently used to describe two other diseases: Covid-19 and polio. Monkeypox has been a concern for years in some African countries and has only recently spread worldwide.

Nearly all the infections outside Africa have occurred among men who have sex with men. Many in the L.G.B.T.Q. community have charged that monkeypox has not received the attention it deserves, reminiscent of the early days of the H.I.V. epidemic.

What it means: The W.H.O.’s declaration signals the need for a coordinated international response, such as investing significant resources in controlling an outbreak and encouraging nations to share vaccines, treatments and other key resources.

A Chinese rocket will fall to earth. No one knows where.

China launched a massive Long March 5B rocket into space on Sunday afternoon carrying new modules to its space station.

Now, for the next week or so, the 10-story, 23-ton rocket booster that was needed to launch the heavy load will draw the interest of space watchers as it falls back down to earth. Unless China secretly changed the design of the rocket, there will be nothing controlling where its debris will land.

The few tons of metal that are expected to survive all the way to the ground could end up anywhere along the booster’s path, which includes Los Angeles, New York, Cairo and Sydney. The chance that it will strike any humans is low but significantly higher than what many space experts consider acceptable.

Background: Space has immense prestige for the Chinese government, which is the only country other than the U.S. to land and operate a rover on Mars. “China is not and has not done anything the U.S. has not already done in space,” said Joan Johnson-Freese, a professor at the U.S. Naval War College. “But it is reaching technical parity, which is of great concern to the U.S.”

Mohamed Mbougar Sarr last year became the first writer from sub-Saharan Africa to win France’s top literary prize. A subject of his novel was the French literary establishment, which he describes with a mix of harshness, ridicule and affection. Now he wonders whether the prizes are an endorsement or “a way to silence me.”

The film “One Second” — directed by celebrated Chinese filmmaker Zhang Yimou — follows a prisoner who escapes from a labor camp. The plot mirrors the 2011 novel “The Criminal Lu Yanshi,” written by Geling Yan.

But when the movie was released in 2020, Yan’s name was neither in the credits nor the promotional materials. She and her husband have begun asking companies in Asia, Europe and North America to add her name but have so far received a muted response.

In the fall of 2018, a literary adviser to Mr. Zhang told Ms. Yan over WeChat that “One Second” could not credit “The Criminal Lu Yanshi,” according to screenshots of their correspondence. The adviser said that doing so could create a legal problem for the director because he had been having an unrelated copyright dispute with a Chinese production company.

Yan, who has publicly criticized the Chinese government’s response to the coronavirus pandemic, said that she was not surprised to see her name removed. Still, she said, she thought that the companies distributing and promoting the film outside China could perhaps agree to credit her in some way.