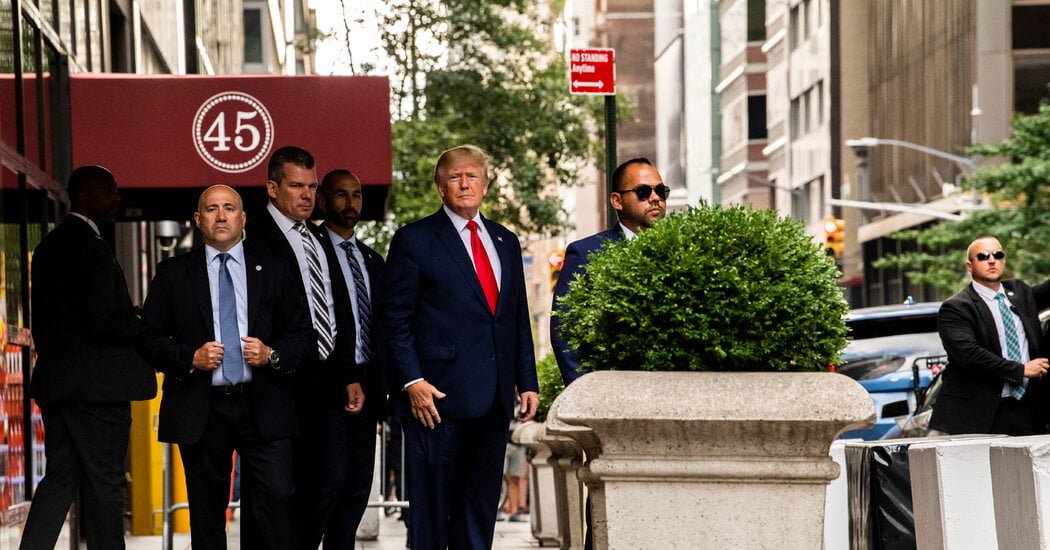 Good morning. We’re covering Donald Trump’s decision not to answer questions in a civil inquiry and details about the victims of Seoul’s floods.

Donald Trump declined to answer questions in a civil inquiry into his company’s business practices yesterday, invoking his Fifth Amendment right against self-incrimination.

He made the surprising gamble in a high-stakes legal interview with the New York attorney general’s office. His strategy is likely to determine the course of the investigation.

Trump’s office released a statement shortly after the questioning began yesterday, explaining that he “declined to answer the questions under the rights and privileges afforded to every citizen under the United States Constitution.” Here are live updates.

The damage at a Russian air base in Crimea appears to be worse than the Kremlin initially claimed.

After a series of explosions on Tuesday, Crimea’s leader declared a state of emergency and said that more than 250 people had to evacuate from their homes. Officials on the Russian-occupied peninsula said at least one person was killed and dozens more were wounded.

Ukraine has not officially taken responsibility for the explosions. But a senior military official said Ukraine’s special forces and partisan resistance fighters were behind the blast. Here are live updates.

Analysis: The blasts could be important, because any Ukrainian attack on Russian forces in the Crimean Peninsula would be a significant expansion of Ukraine’s offensive efforts. Until now, Ukraine has focused on pushing Russians back from territories occupied after the invasion began.

Nuclear plant: Russian missiles killed 13 people near a Russian-held nuclear plant in the south, a Ukrainian official said. Russia may try to divert its electricity to Crimea, which could intensify military competition for the plant and heighten the risk of an accident.

Press: Russian investigators detained a former state television journalist yesterday, months after she staged a rare on-air protest against the war in Ukraine.

Their deaths highlight the predicament of South Korea’s urban poor, who often live in such homes, called banjiha. (“Parasite,” which won the Academy Award for Best Film ​in 2020, dramatically depicted their flood hazard.)

South Korea faces a growing housing crisis and hundreds of thousands of people in the Seoul area live in similar damp, musty quarters. They fear floods each monsoon season, but stay to find jobs, save money and educate their children in hopes of overcoming South Korea’s growing inequality.

Details: The family knew the low-lying district was prone to flooding. But it was cheap and close to a welfare center where the girl’s aunt, who had Down syndrome, could get help.

Quotable: “When I returned home from work, I found my banjiha under water,” one resident wrote on the web portal Naver. “It felt as if heaven had crashed down on me.”

Asia and the Pacific

Ferdinand Marcos Jr. was elected president of the Philippines this year. Now, a new film paints a sympathetic portrait of his family. Instead of focusing on the torture, excess and martial law that characterized his father’s dictatorship, the film portrays the elder Marcos and his wife Imelda as victims of a political vendetta.

In so doing, historians and artists say, the movie opens up a new front in the battle against misinformation in the Philippines, bringing a popular myth that circulated online during the recent election into a new, more credible domain.

There have always been monuments to commemorate the loss of life from calamitous events: wars, genocides, terrorist attacks.

But Covid-19 poses a unique challenge. Millions of people have died, but not in a singular event or in a single location. Now, as the death toll continues to rise, communities are building new monuments and updating existing memorials, trying to keep up with their mounting grief.

“These are kind of odd memorials in that names are being added,” said Erika Doss, who studies how Americans use memorials. “They are kind of fluid. They are timeless.”

90 Day Fiancé: Ariela EXPLODES On Biniyam for Training With a Woman

Yes, The Polio Vaccine is Still Critical For Kids