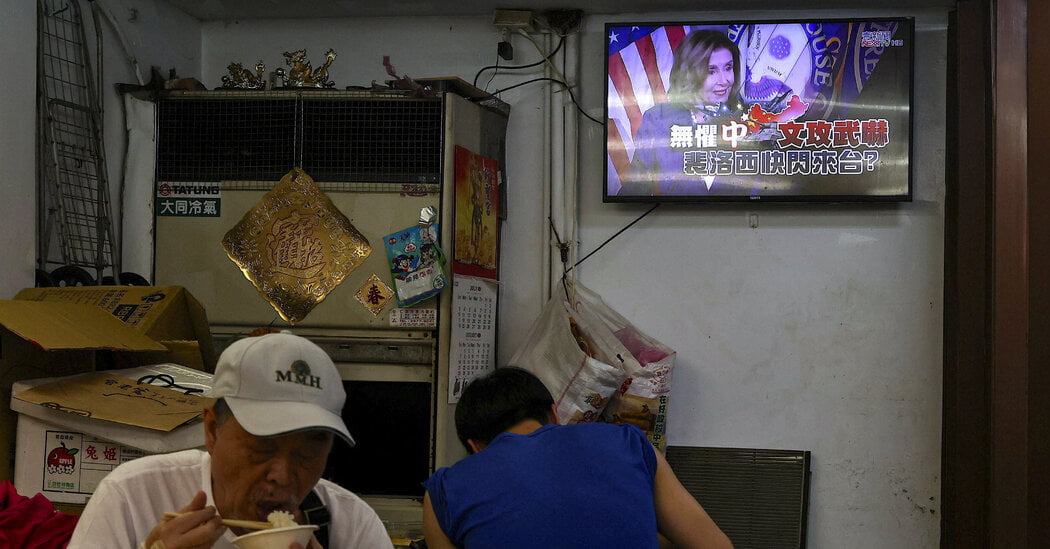 The Chinese military has warned of its readiness to defend its claims over Taiwan ahead of an expected visit from Nancy Pelosi, the U.S. House speaker.

However, China’s leader, Xi Jinping, is also confronting a brittle economic and political moment at home, and careening into a crisis over Taiwan could damage his standing even as he rallies nationalist support.

Xi, who is likely to secure his Communist Party’s backing later this year, is intent on remaining in power. But Pelosi’s potential meeting with Taiwanese leaders could further challenge his public support as China’s growth falters under Covid outbreaks and shutdowns. If Pelosi follows through, experts say Xi is likely to use displays of military might to convey Beijing’s anger while trying to avoid a volatile standoff that would spook markets and drag down China’s economy.

When Xi warned President Biden in a call last week not to “play with fire” and risk self-immolation over Taiwan, his comment was viewed as political positioning rather than a threat.

Quotable: “This is really midlevel warning rhetoric, not high-level warning rhetoric signaling an appetite for war-level risks,” said David Gitter, a China researcher. “It doesn’t suggest that they’re about to do something very crazy — like directly threaten the speaker’s safety.”

What’s next: Taiwanese media reported that Pelosi had plans to arrive in Taiwan on Tuesday night, according to The Associated Press. President Biden’s aides also said they expected Pelosi to proceed with what would be the highest-level visit to the island by an American official in 25 years.

U.S. response: A spokesman for the National Security Council, warning China not to turn the visit into “some sort of crisis,” said the Biden administration was concerned that China would potentially fire missiles into the Taiwan Strait, send warplanes into Taiwan’s air defense zone or stage activities that cross the Strait’s median line.

U.N. peacekeepers opened fire at a border crossing on Sunday in the Democratic Republic of Congo, killing two people and injuring 15 others amid escalating protests demanding the agency’s forces to leave the region.

The gunmen were arrested, the country’s top U.N. official said, adding that he was “deeply shocked and dismayed” by the “unexplained” shooting. The killings came just days after at least 19 people, including three U.N. peacekeepers, were killed and 60 others injured in demonstrations against peacekeeping missions.

Protesters said that the U.N. soldiers had failed to protect civilians against a surge of violence carried out by an array of militant groups. Since late last year, hundreds have been killed or injured and more than 160,000 people have been displaced.

American approach: U.S. Secretary of State Antony Blinken will travel to Congo next week and meet with senior officials to discuss a number of issues, including peace in eastern Congo and the wider Great Lakes region.

Singapore is trying to find solutions to combat urban heat

In Singapore, where temperatures are rising at twice the global average, there is a real fear that extreme heat could make the affluent city-state uninhabitable.

That urgency has led to a government push for solutions. With the help of high-tech developments, including a mobile cart that measures radiation, researchers on the island are now trying to address urban heat through a program that the government said could be a model for other countries.

The program is aiming to build a computer model of Singapore, which would allow policymakers to analyze the effectiveness of heat mitigation measures.

Researchers say Singapore’s geographical position in Southeast Asia makes it a good model for others, particularly nations in the tropics. Situated near the Equator, the island has an average of 84 percent humidity and year-round temperatures that hover around 88 degrees Fahrenheit.

Data: A climate change study predicted that Singapore’s daily average temperature could rise between 35 degrees and 40 degrees Fahrenheit toward the end of this century.

What’s next: Singapore has planted 388,000 trees toward a goal of one million trees by 2030. “The prevailing hypothesis now is that the presence or absence of shade in a place like Singapore is the critical determinant in adjusting to heat exposure,” Winston Chow, a climate researcher, said.

The War in Ukraine

After more than a year of fragile stability, Libya is tipping toward the chaos that gripped it after rebels overthrew Col. Muammar el-Qaddafi, the dictator of more than 40 years. Few places feel the upheaval more than Tarhuna, where seven murderous brothers reigned for years.

A growing number of Koreans who were adopted to the U.S. in the 1970s and ’80s and raised by American families are exploring their heritage in the kitchen.

To reflect on their American upbringings and Korean heritage, these adoptee chefs — most of them now in their 30s and 40s — describe their cooking in a number of ways, including Korean-style, Koreanique and even “kinda Korean.” In the process, the chefs are finding fulfillment and sometimes attracting criticism from other Korean Americans that their cooking isn’t Korean enough.

But despite not growing up with the flavors, they are making delicious, thoughtfully researched food. And many of them view cooking as the ultimate reclamation of their Koreanness — and an act that pushes the cuisine to exciting places.