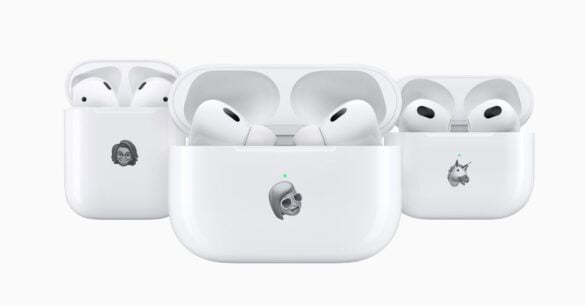 At its “Far Out” event on Wednesday, Apple introduced a new pair of AirPods Pro alongside the upcoming iPhone 14 lineup and long-rumored Apple Watch Ultra. The second-gen AirPods Pro are set to arrive on September 23rd, bringing with them a new H2 chip that Apple claims should cancel “up to twice as much noise” as its predecessor, as well as swipe-based controls and a number of other features.

The second-gen AirPods Pro offer a number of improvements over their predecessor, but are they worth the $249 sticker price? With such a wide range of AirPods available at various price points, that’s a tough question to answer. Lucky for you, we’ve compared each AirPods model below to help you decide which might be the best fit for you. We have yet to review the new AirPods Pro, however, we have published our initial hands-on take on the earbuds, which you can check out here.

In contrast to the plastic AirPods, the AirPods Max are a large pair of over-ear headphones that offers stainless steel earcups with a curvy mesh headband. Thus, naturally, they’re the heaviest and biggest in the lineup. They also offer more color options; the earbuds only come in white, but you can buy the Max in silver, space grey, blue, pink, and green.

Apple sells two cases with its earbuds: a wired charging case that charges via a standard Lightning cable and a MagSafe-compatible model that can also charge via Lightning. All of the MagSafe charging cases are compatible with Apple’s MagSafe technology, as well as other Qi-compatible wireless chargers.

The first-gen AirPods Pro came with a Lightning-only charging case when they launched in 2019, but it’s become harder to find that model in stock. Now both generations of the AirPods Pro come with a MagSafe charging case, though, the case for the newer model differs from its predecessor and the third-gen AirPods in that it features a built-in speaker and Find My support, which allows you to keep tabs on it more easily. Apple also outfitted it with a built-in loop, allowing you to attach the case to a lanyard.

As for the AirPods Max, they come with their own Smart Case, which is designed to preserve battery life by putting the headphones into a very low power state. Sadly, as noted in our AirPods Max review, Apple’s Smart Case is not particularly great, mainly because it does a bad job of protecting your headphones. The case also gets dirty too easily and has too many slits, which makes it easy for the ear cups to get scratched. Unlike Apple’s latest MagSafe Charging Case, it’s also not water-resistant.

When it comes to sound quality, we can safely say that all of Apple’s AirPods — with the exception of the second-gen AirPods Pro, which we have yet to test — do a great job. Yet each model offers a different set of features, some of which make for a better listening experience.

If you’re looking for a pair of noise-canceling earbuds, you’ll want to check out the AirPods Max or either generation of the AirPods Pro. All three offer active noise cancellation, which silences background noise so you can better focus on what you’re listening to. They also offer a helpful transparency mode, so you can hear ambient sounds around you while listening to music and other audio content.

With the exception of the entry-level AirPods, each pair of AirPods offer personalized spatial audio support with dynamic head tracking across all Apple devices. As a result, the more recent AirPods models offer a more immersive, theater-like sound quality experience than the second-gen model, which lacks said feature. The second-gen model also lacks adaptive EQ, which supposedly adjusts output based on your ear shape, and custom high-excursion Apple drivers, which deliver more powerful bass. All except for the AirPods Max also include a custom high dynamic range amplifier that offers clear sound and lengthens battery life.

All of Apple’s in-ear AirPods offer two beamforming mics in each ear cup, with technology that should reduce outside noise and help better focus on your voice. However, unlike the other earbuds, the second-gen AirPods lack inward-facing microphones, so they’re unable to listen inside of your ear to reduce internal sounds. The AirPods Max, meanwhile, feature nine microphones: eight for active noise cancellation and three for voice pickup.

The AirPods Max are, unsurprisingly, the clear winner in terms of battery life. Apple says they offer up to 20 hours of listening time on a single charge with active noise cancellation or the transparency mode on. With spatial audio enabled, the AirPods Max offer up to 20 hours of video playback on a single charge. Moreover, Apple claims a mere five minutes of charging can provide around 1.5 hours of listening time.

The second-gen AirPods Pro are Apple’s first earbuds to offer swipe-based controls. This means you can swipe up or down on the stem to adjust the volume. However, like their predecessor and the in-ear AirPods, they still rely on tactile buttons for other settings. For example, you’ll need to click the stem to pause, play, or answer a call on the third-gen AirPods and both generations of the AirPods Pro. No matter which AirPods model you buy, however, you’ll be able to launch Siri using a simple voice command.

In contrast, the over-ear AirPods Max offer physical controls. Each pair features a Digital Crown — a larger version than the dial on the Apple Watch — as well as a secondary button you can use to alternate between active noise cancellation and transparency modes. However, there is no power button. Rather, they turn on when placed on your head.

No matter which AirPods you buy, you’ll be able to automatically switch between your various Apple devices. All of the AirPods are also compatible with the latest iPhones, iPads, Apple Watches, and Macs. However, the second-gen AirPods also work with older devices, like the iPhone 6 and the second-generation iPad Mini.

The most obvious difference between each AirPods model is the price. The $129 second-gen AirPods start at $129, although we often see third-party retailers like Amazon sell them for $99. The third-gen AirPods, meanwhile, vary in price depending upon which one you buy. Apple sells the version with a Lightning Charging Case for $169, while the model with the MagSafe charging case goes for $179. However, we regularly see the third-gen earbuds sell for anywhere between $149.99 and $169.99 at Amazon, Target, and elsewhere.

While Apple no longer sells them, you can also still buy the first-gen AirPods Pro on sale normally for around $174 instead of $249 from various retailers, including Walmart. The newest AirPods Pros, aka the second-gen model, are currently available for preorder for $249, but will likely go on sale as we approach Black Friday. Finally, the most expensive pair of AirPods, the AirPods Max, are listed at $549 but are often on sale for around $479.

Apple’s latest AirPods Pro take after the last-gen model, but include swipe controls and a new H2 chip that allows for improved noise cancellation. They also come with a water-resistant charging case that offers support for Apple’s robust Find My network.

Which should you buy?

Each model in the current AirPods lineup offers good sound quality, reliability, and great ease of use. But which you should buy depends upon your needs and budget.

If you want noise-canceling, over-ear headphones, it’s an easy choice: you should buy the AirPods Max. Yet things get a little more complex if you’re on the market for a pair of true wireless earbuds. If you want active noise cancellation, you’ll want to consider the AirPods Pro, as they’re the only earbuds in the current AirPods lineup that offer it. You may also want to consider the AirPods Pro (or even the third-gen AirPods) if you often engage in workouts, as they offer IPX4 sweat and water resistance. Plus, both the first- and second-gen AirPods Pro come with replaceable ear tips, which allow for a more secure, comfortable fit.

If you want the model with the best noise cancellation, though, that’s likely to be the second-gen AirPods Pro. While we haven’t yet tested these claims, Apple says they will be able to cancel out twice as much noise as their predecessor, while offering an improved Adaptive Transparency mode. If you have very small ears, you may want to opt for the second-gen AirPods Pro, as they come with a pair of extra-small ear tips.

On the other hand, if you’re looking for something more budget-friendly, the first-gen AirPods Pro are often on sale for around $179.99. That’s roughly the same price as third-gen AirPods, and only $50 more than the entry-level, second-gen AirPods. Yet they offer active noise cancellation, too, as well as three replaceable sets of customizable ear tips. They also offer features the third-gen AirPods boast over the second-gen AirPods, like sweat and water resistance, a MagSafe charging case, and greater spatial audio support. 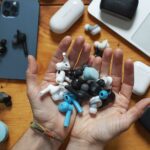 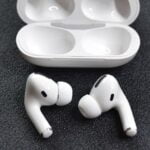 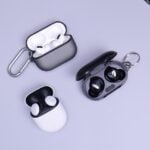 How Much Should You Spend on True Wireless Earbuds?
Share 0 FacebookTwitterPinterestLinkedinRedditEmail