Travel chaos was everywhere this summer, with airports across Europe struggling to meet increased demand after letting so many staff go at the height of the pandemic.

The staff shortages resulted in miles-long queues and thousands of passengers missing their flights.

One of the ways airports have tried to keep passenger numbers manageable is with passenger caps.

In mid July, London’s Heathrow airport decided to limit the number of departing passengers to 100,000 per day.

Earlier this week they announced they would be lifting their cap at the end of October.

But while airports may be getting back to pre-pandemic flight numbers, staff shortages continue. With passenger caps likely here to stay, what are they exactly and what’s the impact on travellers?

What are passenger caps?

Last week, Amsterdam’s Schiphol airport announced that it would be keeping its passenger cap in place until the end of March 2023, after initially implementing a 67,500 capacity limit in June of this year.

In a statement released last week, the Dutch airport said it will work on “structural solutions” to its staff Are passenger caps good or bad news for travellers?shortages including “better rosters, improved rest rooms and better wages for security company employees.”

Are passenger caps good or bad news for travellers?

For passengers, there are both upsides and downsides to passenger caps.

On the downside, they are likely to cause flight prices to go up. To cope with the capacity limits, airlines sometimes have to cancel flights, with British Airways cancelling over 10,000 flights to or from Heathrow.

According to Clive Wratten, the Business Travel Association’s chief executive, “September and October have been hampered by fewer flights during the vitally important post-summer business period, and the removal of the [Heathrow] cap will enable business travel to grow again. As a direct result, business travellers have been faced with an up to 30% increase on the cost of their flights compared to pre-pandemic prices.”

Speaking to Euronews Travel, Wratten added “We’re still going to see Heathrow, as what is the primary hub for business in and out of the UK, slowly rearing build-back through the winter; it will hopefully offer the opportunity for destinations to be re-opened up and the prices to be a bit lower than they have been.”

Are passenger caps here to stay?

Wratten noted that Heathrow has reserved the right to implement passenger caps during busy travel periods, like Christmas or school holidays, which may cause some concern over last-minute flight cancellations.

Heathrow defended their passenger cap, saying it reduced last minute flight cancellations and meant that fewer passengers lost luggage. If true, this makes for a better flying experience for travellers. 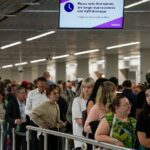